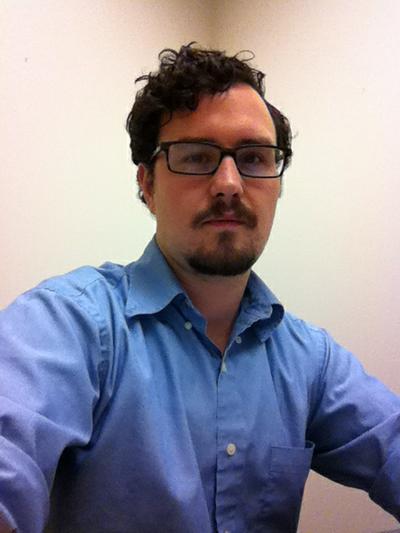 Russell Brakefield’s poems “Kalkaska County, Michigan”, “This is America, And We Are Boys”, and “The Dog-Man of Luther” appear in Midwestern Gothic Issue 6, out now.

How long have you been writing?
I have been working with words as long as I can remember—stories, songs, nursery rhymes. I grew up in a house that revolved around music, and I think that climate informed my eventual move towards poetry. In college there were a few very supportive people—Mark Yakich, Kim Chinquee, Robert Fanning—that helped me to figure out how to make a serious life around writing.

What’s your connection to the Midwest?
I have lived in Michigan almost my entire life. The lakes were especially important to my upbringing, shaping my interests and my general aesthetics. My most poignant memories and relationships have ties to the geography and culture of Michigan—the lakes, the northern forests, the dynamism of cities and the narratives of the people in them.

How has the Midwest influenced your writing?
My work often centers around ideas of place, both physical and psychological, and commonly entertains themes of movement across landscapes, using geographical positioning as mode for meditations on human contradictions and conditions. The Midwest is directly responsibly for these thematic obsessions, along with the more pointed imagery and “things” that make up my poems. The Midwest, and Michigan specifically, has a way of getting under the skin. It’s a fluid life there, existence based on the seasons and their extreme polarization. Michigan, partially because of that harsh diversity of seasons, also has extremes of intense insularity and intense peopling.

Because of this living in Michigan has afforded me a unique opportunity to approach an understanding of the spectrum of human experience through investigating ideas of movement and through thinking about response to the land and climate. Michigan also represents a sort of dynamism in containment to me, a vast, variable landscape and culture that exists within the lock of the lakes. The disparity between the seasons—the shifting between community and isolation, between snow and not—these things create an atmosphere that has manifested for me by making restlessness, movement, conflict, and faith, the central themes of my work. Michigan’s motto is “If You Seek A Pleasant Peninsula Look About You.” Balancing this, the idea that your land will provide a singular source or life and personhood, in the face of a deep desire to see beyond those boundaries, this balance fuels much of my work and thought.

Why do you believe there has never really been a regionalist push for Midwestern writing in the past like there has with the South or even the West Coast?
I do believe that there are writers that have already expressed certain aspects of the Midwest experience with more fervor and talent than I could ever begin to think about. And there are certainly musicians and visual artists that have done this for years—think Motown’s Detroit or Nelson Algren’s Chicago. And I think that there are people, both within the cannon and coming up right now, that do represent at least a sensibility towards the representation of their own Midwestern experience— people like Jim Harrison, Robert Haydon, Marylin Robinson, Gwen Brooks and Carl Sandburg come to mind for me immediately. Or writing now, the work of Kieth Taylor, Ben Lerner, Kevin Young, Eugenedies, Donald Rey Pollack, and the list goes on.

All that being said, the Midwest is a dynamic place. Apart from the lakes, the boundaries here can be somewhat superfluous, but the experiences of the Midwest are often vastly different. Even for the geographically approximate there is a wide range of ideologies and lifestyles. This may be what I find most beautiful about the region, its ability to exist as a geographical and cultural entity with so little cohesion or similitude.

Chicago is not like Northern Michigan. Nebraska is not like Wisconsin. In this way the Midwest relies on the narrative of its people to cultivate its identity. The South and the Coasts, for all they have to offer—which is a lot, and which is dynamic enough in itself—have a presupposed identity based certainly on landscape and cultural reputations, but also on an inherent mythos that has defined those places for decades. Perhaps these places, I could also include the Pacific Northwest and Southwest, have a historicity or a cache that acutely defines them, especially to outsiders, even if not accurately.

That is to say their identity, or the perception that they have a more unified identity, is sometimes put on them by others. It is also important to note that as artists we gravitate towards cultural centers. A great many people we read as coastal poets or southern writers may carry more of the great lakes or the prairies with them than we discuss.

How do you feel about social media to promote your writing, and do you use it?
I think that social media can be a very powerful tool in promoting work. I am increasingly impressed with the ways in which independent presses, journals, and people within the writing community are finding ways to use the internet for the proliferation of poetry. Weather you find proliferation a pejorative word here or not, there is no question that more work is being made available to more people. The sustainability of the written word, particularly smaller presses and journals, relies on the sort of indie music mentality that thrives in the digital world. Some of the most beautiful work being done right now exists only online. In terms of promotion though, I personally find the process of reading about other peoples work far less boring than publicizing my own.

If you could have coffee (or tea or a beer) with any literary figure, alive or dead, who would it be?
I would have a Coca-Cola Classic with Frank O’Hara.

Where can we find more information about you?
I have poems appearing this fall in The New York Quarterly and the Crab Orchard Review. I have a website at www.russellbrakefield.com, where you can contact me directly. You can ask my friends about me, but anything they say will be slanderous and offensive.