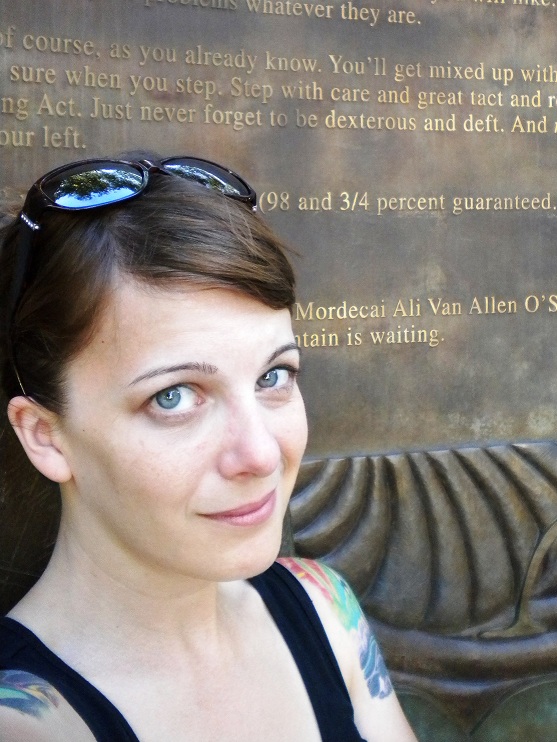 How long have you been writing?
I honestly can’t remember not writing. I was always making up stories when I was in elementary school, and started writing poems in junior high, these awful little rhymed couplet things that, fortunately, my sixth grade teacher saw fit to encourage. I discovered sonnets in high school and performance poetry in my twenties—but I’d say it took me until the last few years to really get serious enough about writing to make it the highest priority in my life. Finally getting my MFA after years of saying, “You know, someday I’d really like to go back to school…” was a game-changer. Now I can’t imagine a life built around anything else.

What’s your connection to the Midwest?
I’ve lived in Michigan my entire life, growing up in a quintessentially Midwestern small town. I regularly fall in love with other places when I travel and have considered relocating, but for a variety of reasons, I’m still in the Mitten.

How has the Midwest influenced your writing?
I think a bias toward the Midwest has definitely crept into my collection of circus poems. One of the best bits of fun for me is sprinkling the poems with place names, and I scour maps and the interwebs for the ones that sound just right. When my circus travels outside of the Midwest, it’s generally to recognizable places like Albuquerque or Sarasota or New Orleans. But within the Midwest, there’s these great, hidden little places like Caneyville, Kentucky, or Stampers Creek, Indiana, and I just can’t resist the music in those names.

Why do you believe there has never really been a regionalist push for Midwestern writing in the past like there has with the South or even the West Coast?
My guess is that people who aren’t from the Midwest have this impression of us as a bit of a cultural no-man’s land, one giant cornfield with some factories around the outskirts, with Lake Wobegon as the capital. And Midwesterners can be a self-effacing lot; we know that’s not the case, but we’re content enjoying the fantastic stuff that writers and artists are creating here and don’t necessarily feel the need to jump up and down and shout about it. I think people outside the Midwest are starting to catch on and take notice anyway—so maybe it’s a regionalist pull instead of a push.

How do you feel about social media to promote your writing, and do you use it?
I have a bit of an “if you can’t beat ’em, join ’em” outlook about social media. I feel it takes up too much space and time in our lives, and I try to unplug for a few weeks at a time a few times a year. But if I’m not on a self-imposed virtual hiatus, I regularly make use of social media to promote my writing and various projects I’m involved with. I don’t think I’ll ever be entirely comfortable with self-promotion, but I acknowledge the necessity, and social media is a good tool for the job.

Favorite book?
Favorite book? Singular? You’re kidding, right? Okay, some favorites off the top of my head, by category. Poetry: Anything Sexton. I Was the Jukebox by Sandra Beasley. Anything Dickinson. Leadbelly by Tyehimba Jess. Nonfiction: The Undertaking: Life Studies from the Dismal Trade by Thomas Lynch. Fiction: Grendel by John Gardner. Anything Bradbury. A Prayer for Owen Meany by John Irving. And a short story by Lydia Davis called “Break It Down” absolutely tore me apart when I heard it on NPR years ago. I’ve been making people listen to me read it to them ever since.

If you could have coffee (or tea or a beer) with any literary figure, alive or dead, who would it be?
Again, only one? I’d like to listen to Neil Gaiman tell stories over tea. Or go out carousing with Hemingway.

Where can we find more information about you?
I’m online at poetrysideshow.com.