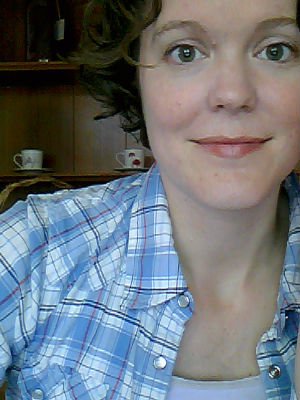 How long have you been writing?
I’ve been writing since I was seven or so, but I didn’t take it up as a daily discipline until my late twenties. Before that, I was studying classical piano, the demands of which eclipsed everything else. Thankfully, the musician’s habit of sitting down every day and working—whether you want to or not—has been crucial in my writing. At this point I’ve been a committed writer for about five years.

What’s your connection to the Midwest?
Aside from a volunteer stint in Eastern Europe and various trips, I’ve lived in the Midwest my entire life. I grew up in rural Michigan, just outside Horton and Hanover—a couple tiny towns that formed a joint school. I attended college in Ohio and Michigan and graduate school in Ypsilanti, Michigan, which is where I now teach and write and raise my daughter.

How has the Midwest influenced your writing?
In a way, it influences everything I write because I am a Midwesterner through and through, and who you are always bleeds through what you create. But Hanover, Michigan in particular has strongly influenced my writing, especially the fundamentalist Baptist church there, which I attended with my mother until I turned eighteen. I’m working on a collection of short stories linked around a fictionalized version of that town. Some of the places in my stories—the church, the antique organ museum, the empty art gallery—actually exist. Others I’ve created to fit the feel of the place, which always struck me as solemn and a little eerie. It’s a feeling I can’t shake, which means I keep coming back to Hanover again and again in my work, trying to evoke that same haunting sense of place.

Why do you believe there has never really been a regionalist push for Midwestern writing in the past like there has with the South or even the West Coast?
A writing mentor of mine, also a Michigander, lived in San Francisco for a few years. Early one December a colleague asked her if she was going back to Missouri. She told him she grew up in Michigan. “Does it matter?” he asked. People seem to turn up their noses at the Midwest. While reading some of Anne Fadiman’s essays, I stumbled across these sentiments. She referred to Midwesterners as people who wear crew cuts, eat tuna noodle casseroles and limit their reading to monthly issues of Reader’s Digest. I may be totally off here, but one of the most definitive elements of the Midwest for me is the lack of pretense, and I think that too often the unpretentious are automatically lumped in with the uncultured, the unappreciating. I personally find the Midwest definitive and rich with stories, though I admit it’s taken me some time to realize it. When I was younger, I thought I came from nowhere.

How do you feel about social media to promote your writing, and do you use it?
I use Facebook, though I doubt it is the best online vehicle. I’ve contemplated setting up a Twitter account, but with mothering and teaching, I have very little time to spend maintaining a web presence. The most fundamental thing is the work. I know that if I want to succeed as a writer, I must work (and work and work and work). Social media is a tool, but it is not writing, and right now the writing is usually all I have time for.

Favorite book?
I don’t think I can narrow it down to one. Books that have most profoundly affected me are The Brothers Karamazov by Fyodor Dostoevsky, The Little Prince by Antoine de Saint-Exupery and Gilead by Marilynne Robinson.

If you could have coffee (or tea or a beer) with any literary figure, alive or dead, who would it be?
I think I’d choose George Eliot. I lived an entire life reading Middlemarch, and I understood her characters so deeply, especially Dorothea Brooke. Also, she wrote at a time when women weren’t supposed to write, so she doubly deserves resurrection.

Where can we find more information about you?
You can find my work online in Perigee, the Lowestoft Chronicle and the Center for Mennonite Writing Journal, among other places. I also have an essay forthcoming in Ruminate Magazine. If you’d like to know more, friend me on Facebook.