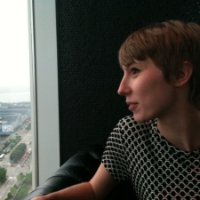 Anna Prushinskaya’s piece “Sometimes One Thing Leads to Another” appears in Midwestern Gothic Issue 8, out now.

How long have you been writing?
I started writing consistently after attending the University of Michigan’s New England Literature Program in 2005. I dabbled in writing before that time but I connected to the possibility of writing seriously through that program.

What’s your connection to the Midwest?
I’ve lived in the Midwest for some time. My family came to Michigan from Uzbekistan by way of Russia in 1998. I attended the University of Michigan as an undergraduate student, too. I have been an Ann-Arborite on and off for about six years.

How has the Midwest influenced your writing?
It’s my second home. I think a lot about the idea of “home,” which surfaces in my writing.

How do you feel about social media to promote your writing, and do you use it?
Well, social and emerging media have really shaped my professional life. I worked at Electric Literature, an independent publisher in Brooklyn, NY, which made me into a kind of optimist about the use of digital media in times of transition. These transitions are tumultuous and pose new and difficult challenges, but I believe that the challenges are not insurmountable. I now think about that same transition in the context of the performing arts in my role as manager of new media at UMS. I think there is incredible potential in social media, though I use it only sparingly and very personally with respect to my own writing.

Favorite book?
Is it OK to say Anna Karenina?

Favorite food?
I don’t think that I have a favorite. This fact is probably a characterizing food-related detail in itself?

If you could have coffee (or tea or a beer) with any literary figure, alive or dead, who would it be?
In my own writing, I’m very interested in the short short; how to tell a story in compact, lyric, episodic prose. I would love to have tea, or maybe a glass of wine, with the women whom I consider masters of this form: Amy Hempel, Lydia Davis, Grace Paley.

Where can we find more information about you?
annavpru.tumblr.com/