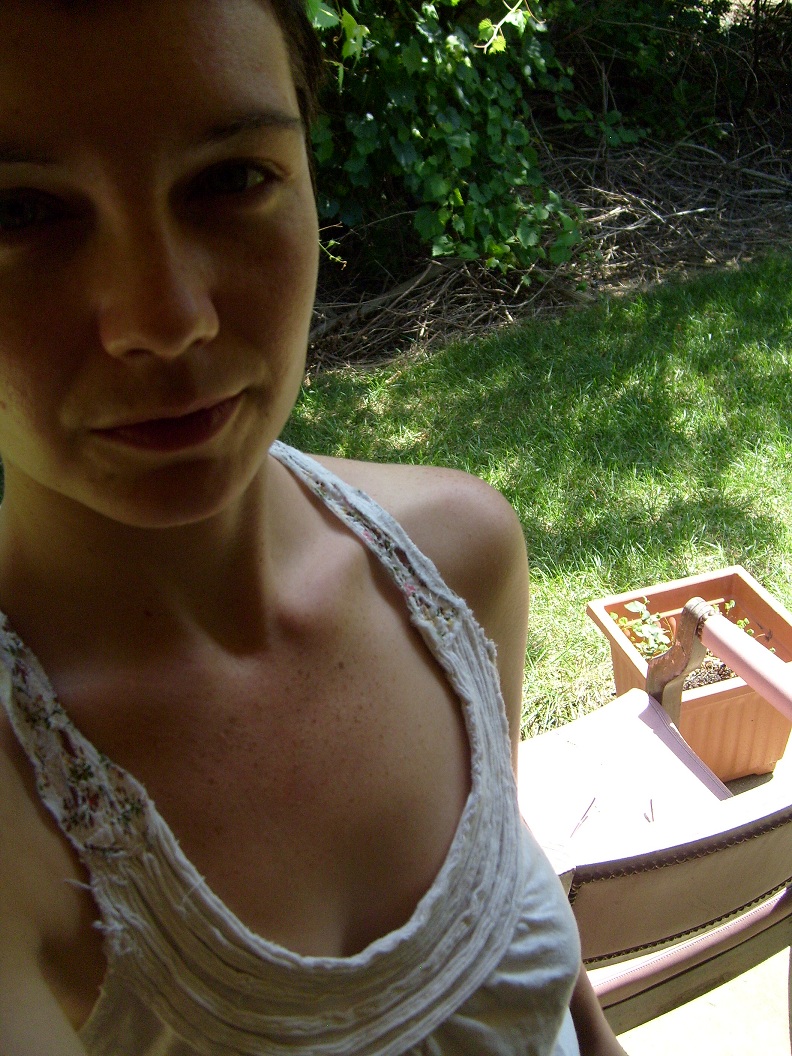 Rachel Danielle Peterson’s piece “On the Burning of a Statue of Jesus” appears in Midwestern Gothic Issue 8, out now.

How long have you been writing?
I have been writing/sketching in notebooks ever since I can remember.

What’s your connection to the Midwest?
I was born in Harlan, Kentucky, but my family moved to southern Ohio when my father lost his job working as a coal miner. Home was always Kentucky for my family. Growing up in Ohio, we often felt like outsiders with our diphthongs. I was called “inbred” and “hick” more times that I can count. This illustrates, I’m afraid, one of the nastier aspects of the Midwest: the prejudice that it seems alright to express toward Appalachian culture specifically, and Southern culture in general. Worse, I even had a teacher in grade school refuse to listen to me unless I talked “right.” So I listened to the broadcasters on the news and elsewhere, and swapped my accent for theirs. I still use “y’all,” but most natives think I’m a corn-fed Midwestern gal. I am, to some extent, but, in my bones, I still feel like a outsider. That’s where art comes in, I suppose. It names these boundaries of identify even as it aches to surpass them, or, sometimes, rip them open.

How has the Midwest influenced your writing?
All art exists in a cultural vacuum, right? 🙂

The Midwest may be flat compared to other places, at least where I live, but the landscape is really quite visceral. The colors in autumn are as breath-taking as the dropping temperatures that hazes breath. Winter brings not just now and blizzards, but temperatures so low (sometimes in the 0’s) that people need a scarf or a hockey mask just to go to the grocery. Spring is full of flowers and grass and fettle fields (of course), but also storms and tornados–power outages and heat-lighting. Then weeks of steely gray skies must be endured for a few moments of clear, undisturbed sunlight. Even at the height of summer, as the scent of flowers seeps into everything like a heady perfume, there are days where you can’t walk a mile without collapsing . The heat in midsummer is often stifling, swamp-like, and like a hothouse, green things survive, even thrive.

Landscape doesn’t tell you everything, but it does tell you something, I think, and the Midwest is a very different something than what you find in other regions. It is both fertile and fierce–definitely qualities that have crept into my own writing.

Why do you believe there has never really been a regionalist push for Midwestern writing in the past like there has with the South or even the West Coast?
“The Midwest” seems more like a geographic designation rater than a cultural one. Something in the middle doesn’t seem very special. Unless you’re Goldbricks. She found the median to be “just right”…However, it seems Midwesterners don’t see themselves as having much of culture that is special, but they do! The denial is, indeed, part of the charm. For instance, there is is something stoical, often humble, in the stance of the Midwesterner. This comes from having a life so caught up in farming and efforts to tame the landscape. Farming requires planning and effort, and it takes precedence over everything else, even, perhaps, overt shows of expression. Here in Ohio, the weather is so unpredictable, often intense, a tension charges the air from the smallest towns to the largest cities, like the promise of lighting. “Will the crop fail?” is a question—the only question— that is felt everywhere. There is a real grasping after whatever food we can tear from stalk and root and make thrive despite floods and frosts. So when pleasures, or escapes, are found, folk tend to grip them tightly. Give thanks. Because life not only requires work, but is also fleeting. And hard. So very hard.

How do you feel about social media to promote your writing, and do you use it?
I love technology at least as much as I love nature. I don’t plan to take either for granted.

Favorite book?
What I keep reading and re-reading right now, prose-wise, is Remembrance of Things Past. It was a book that I have waited to read because I wanted to be ready. I am so glad I waited.

Poetry-wise, I am immersed in Lorca, Berryman, Edith Sondergram, the lady troubadours, and a few contemporary poets thrown in. I have also been translating German poetry, bowing to those great poets like Heinrich Heine, Annette von Droste-Hülshoff, Rilke–too many to name. It is unfortunate that Americans have prejudice against German culture and language. Of course, I can’t blame us. Most of the worse/best cuss-words are German. Look at our movies too: Germans are always the bad guys. But German culture produced some of the greatest composer, greatest minds, and so many Americans are of German descent.

Favorite food?
Anything that is well-made. I prefer a fast to a bad meal.

If you could have coffee (or tea or a beer) with any literary figure, alive or dead, who would it be?
Probably Hemingway. I’d pretend to have a nice, quite drink with him….Then dump a high ball in his face and shout, “That’s for pushing Wallace Stevens into a puddle! And for writing The Old Man and the Sea!”

Where can we find more information about you?
Facebook. That’s where you got o see the latest info. I have online work available at Arsenic Lobster….And…a book in the works.