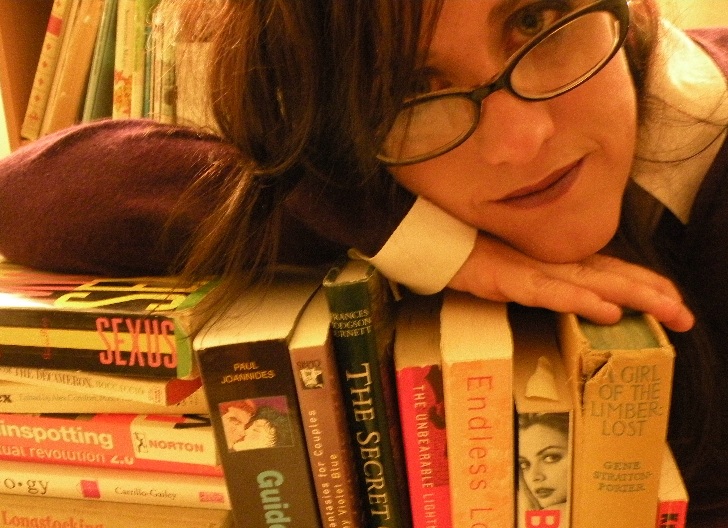 How long have you been writing?
Since I could hold a pencil.

What’s your connection to the Midwest?
My partner, Patrick, was born and raised in Tulsa. I know that many—including the Census Bureau, I’m told—think of Oklahoma as the South. I’m from Arizona and grew up loving pioneer novels and the idea of the frontier. Before I knew Patrick I thought of Tulsa not as the South but as the Heartland. Once I visited I began to think of Tulsa as solidly part of the Great Plains. Like every urban center, Tulsa now has diverse, contemporary cuisine and entertainment. But inside people’s homes—at least the homes to which I’ve been lucky enough to be invited—the food is very breadbasket, very meat and potatoes. Peoples’ sensibilities are much more Midwestern than Southern.

How has the Midwest influenced your writing?
One of the things that surprised me about Tulsa is the stories my Oklahoma peers tell about their (recent-ish) youth. Kids rebel everywhere, of course. But again and again I would hear stories of people from communities with archaic liquor laws and from buttoned-up homes—kids whose mouths were washed out for cursing and who were forbidden by their folks to have sex before marriage, that kind of thing—who just went bonko when they achieved a little independence. I’ve used up more than my fair share of idiocy and poor choice making and I know kids partying is nothing new, but the way these people fetishized drinking and sex—mostly drinking—just blew my mind. I know adults with fulfilling, creative, successful lives who still tell stories of ho-hum Oklahoma college houseparties marked by rampant alcohol poisoning and blackout sex as if it was the Renaissance of their lives: that’s really foreign and melancholy to me. While broadly these memories mimic the exploits of youth everywhere, hearing such similar stories over and over again made me pick up on the unique details of each tale and those details, in turn, seemed uniquely Midwestern to me. I’ve written several pieces set in Oklahoma and each has its own sadness and its own triumph. And then, of course, there’s the setting. I love how proud Tulsans are of Turkey Mountain, this little hill in the middle of town. I’m from the mountainous West and think of Tulsa as fairly flat, but listening to Tulsans go on about their hills made me take a closer look at the place and that led to plenty of inspiration for where and how to set my stories.

Why do you believe there has never really been a regionalist push for Midwestern writing in the past like there has with the South or even the West Coast?
My mother’s family is from Chicago and Wisconsin and I grew up surrounded by battered Carl Sandburg and Willa Cather books and when I think of literary academia I think of Iowa. So I’ve never had the sense that there is a lack of a regionalist push for Midwestern writing, although when I think about it critically I understand what you mean. But I don’t have an answer. To me the Midwest holds just as much romance, sadness and literary inspiration as the American West and (for me, at least) quite a bit more than, for instance, New England.

How do you feel about social media to promote your writing, and do you use it?
I struggle with this. My former mentor, Cheryl Strayed, is an author who uses social media to great effect. I think part of the reason Cheryl is so successful is because she’s so genuine: she enjoys interacting with readers and is generous with her time and spirit. The only time I ever log onto Facebook anymore is to post photos of the kids for their Facebook-dependent grandparents and to toot my own horn about publications. And I feel rotten about that. I think there are thousands of things better to do with one’s time than fuck around on social media, but I also recognize it’s a vital tool in today’s market and would/do use it heavily to promote a book or help sell copies of the latest issue of Midwestern Gothic. I just feel so darn guilty and hypocritical when I promote without participating in or giving back to those communities, but I’d rather be cooking or gardening or drinking or scrubbing the grout with an old toothbrush.

Favorite book?
How could anyone, ever? A handful or two of beloveds are The Awakening, Lonesome Dove, The Sisters Brothers, The Amazing Adventures of Kavalier and Clay, The History of Love, John Nichols’ New Mexico trilogy and most everything by Chaim Potok. But you know what? My most reread book of all times is probably a little paperback novel I picked up at a middle school bookfair: On Fortune’s Wheel by Cynthia Voigt.

If you could have coffee (or tea or a beer) with any literary figure, alive or dead, who would it be
Joan Didion. And I’d be scared of her the whole time.

Where can we find more information about you?
When I met Patrick I had a clunky, mostly-forgotten Frontpage website highlighting my writing and painting. In his online due diligence of me he came across it to my great embarrassment and until someone else designs a site for me, Jessica Emerson websites shall be no more. I do write an active anti-foodwaste blog, though. It’s called Sandwiches for my Man (www.sandformyman.com) and it chronicles the sandwiches I turn out for Patrick using leftovers. So you could poke around there if you want to find out what I pair with leftover roasted chicken, which composting links I like, how to turn the dregs of carryout saag into a Dagwood or why I don’t think a blog called Sandwiches for my Man is misogynistic. Also, it’s good if you, you know, dig sandwiches.