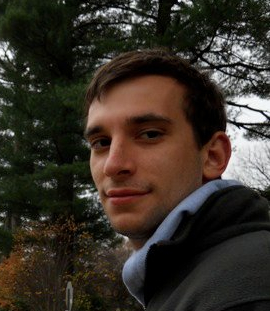 How long have you been writing?
Since I was a kid, but I started focusing on literary writing about eight years ago.

What’s your connection to the Midwest?
I was born and raised in Michigan, in the woods, by a lake.

How has the Midwest influenced your writing?
Heavily. My characters always have a little dirt in their ears and I focus quite a bit on setting, especially the natural world.

Why do you believe there has never really been a regionalist push for Midwestern writing in the past like there has with the South or even the West Coast?
Too many parts of the Midwest that are too individualized.

How do you feel about social media to promote your writing, and do you use it?
I let my friends know when I get published or have finished drafting a piece but that’s really the extent. I’m sure it’s a great tool, just not one I employ often.

Favorite food?
I want to answer this, but I change my mind too frequently.

If you could have coffee (or tea or a beer) with any literary figure, alive or dead, who would it be?
I wouldn’t be able to pass up a drink with Hemingway.