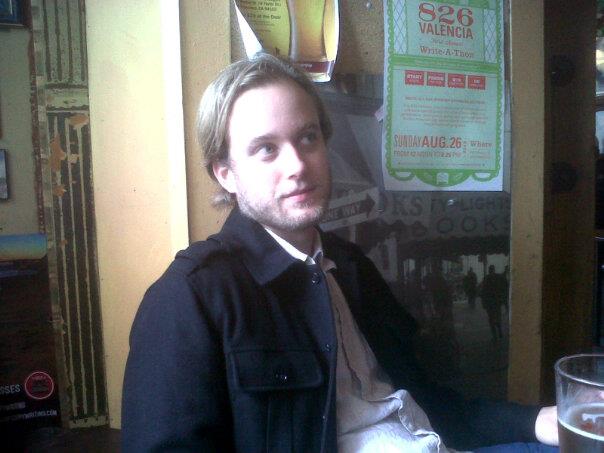 How long have you been writing?
I always liked to make up stories, but I didn’t really figure out that “writing” was something that could be taken seriously until I was a sophomore or so in college. I think I just lucked into the right books and the right kind of teachers and something clicked for me then. But the best part about writing—you know, the making stuff up—has never really changed.

What’s your connection to the Midwest?
I’ve been living in New Orleans, now, for about five years. I live here with my wonderful wife-to-be and a funny boxer dog. But before I moved to the south, I lived in South Bend, Indiana, for 14 years, which is both the longest and most formative amount of time I’ve spent anywhere. If I had to say I was “from” anywhere, I’d say Indiana.

How has the Midwest influenced your writing?
I’ve never felt as inspired as I did during October in South Bend. I don’t know why. Something about the colors and the creeping cold and the smell—you know, the burning leaves and fireplaces and such (and even though the Ethanol plant in town smelled really bad in theory, I’ll admit that it didn’t sometimes). That time of year always recharged my imagination and it was good to dream with. But in other ways, too, the Midwest taught me things I’m still puzzling out. There’s some really neat history in a place like South Bend, some proud and important history and also some darker stuff, too; but, for one reason or another, that history isn’t going to make itself known like it will in a lot of other regions. You have to kind of dig. I think a lot about those fossil-like ribbons of streetcar track where the asphalt has worn through in downtown South Bend. It’s not just about learning how things were, but learning something about time and what changes and why, if there’s a reason why at all.

Why do you believe there has never really been a regionalist push for Midwestern writing in the past like there has with the South or even the West Coast?
Midwestern Gothic is doing a damn fine job of pushing it nowadays. I’d say the prior lack might have something to do with what I was trying (and failing) to describe in the last question. That the truths are old truths and they really need to be mined, but of course that’s what makes them special. That’s why the “Gothic” in Midwestern Gothic feels so apt to me. There was a priest named Bob Griffin who for decades wrote a weekly column in the school paper at Notre Dame. The series was called Letters to a Lonely God. But I remember reading one, once, and it began, “South Bend seems like an unlikely place to begin an odyssey,” and that always stuck with me. Whatever the reason is that a Midwestern town seems an unlikely place for an adventure must have something to do with why there’s so much great storytelling coming out of the Midwest today.

How do you feel about social media to promote your writing, and do you use it?
There a bunch of really top-shelf work out there that I never would have discovered had social media not brought it to me. I get on Twitter and such. That’s just the world we live in. A nice thought is that when people like something they pass it on, and then maybe some of their friends pass it on, and the work survives in that way because it’s really doing something valuable for folks.

Favorite food?
Tougher to answer than my favorite book… Good Italian any day of the week, certainly. I also love oysters. Still, last meal, no doubt, would have to be my mom’s chicken paprikas. The recipe comes from her parents, who grew up in the Hungarian part of Toledo, Ohio.

If you could have coffee (or tea or a beer) with any literary figure, alive or dead, who would it be?
A beer with Twain would be pretty neat. So would a tea with Joyce. Or a coffee with Orwell.