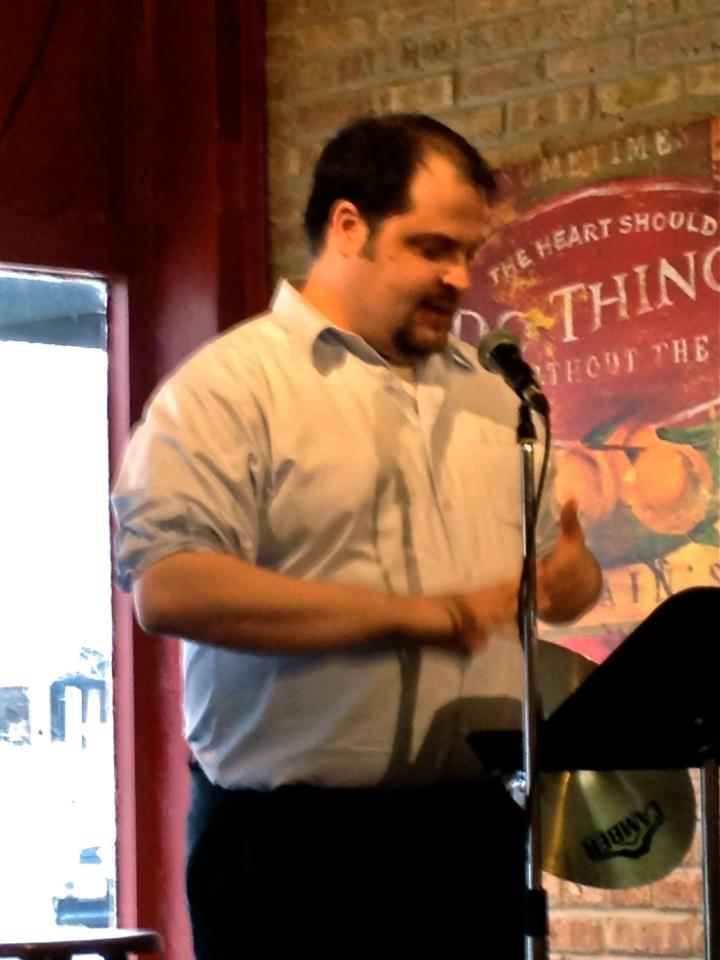 How long have you been writing?
As a boy, since I started walking to school by myself, I would think of stories in my head. As I got older, a lot of my stories got tied into the role-playing games my friends and I would play. In high school I started toying with short stories, in college I learned I was a poet—thanks to Debra Bruce. In grad school, Richard Jones taught me how to paint with words. Michele Morano’s Writing & Publishing Program at DePaul introduced me to literary non-fiction—also that I can do all three.

What’s your connection to the Midwest?
I have always lived in the Midwest. I am a life-long Chicagoan—yet I find it hard to call myself an Illinoisan. Chicago is like its own city-state—the blue tie in the red suit. The German side of my family had old farmland outside of New Buffalo, Michigan—we would spend our vacations there. It was surrounded by the highway, the Galien river, and woods—it was like our own little realm. I would fish, run around with BB guns or my compound bow, and be a wannabe wolverine.

I did not really feel like a Midwesterner till a trip to New York and was told that my quite polite warm charm gave me away.

How has the Midwest influenced your writing?
That is what I really like about Midwestern Gothic—we poets and writers who have lived here our whole lives not only deserve or own canon, but to celebrate it. We have inherited unique values from dignity of work—whether in an auto plant or on a tractor, being confident without the need to be cocky, and then there is the way we tell stories—whether given to us by immigrant traditions or the ones we may have picked up by way of places like the local barber shop.

Why do you believe there has never really been a regionalist push for Midwestern writing in the past like there has with the South or even the West Coast?
I have thought about this and have a few feelings on the matter. Midwesterners are tribal—Ohioans still hate Michigan Wolverines for trying to steal Toledo, I hate Ohioan carpetbaggers for gentrification in Chicago, Wolverines call me a FIP (Fucking Illinois Person), and all the states have this fight within for the blue or red color on the political map. Our sports do the same thing as politics—divides and separates us into different tribes—even in the same town. The other problem with a Midwestern regional canon is members would have to be Midwesterners. The Midwest, in the rural areas, are traditionally places people leave—perhaps getting identified with another group. The urban areas, like my Chicago, have a lot of establish poets and writers from other regions—they may not identify with the Midwest. Then there are poets like James Wright and I who write about the people who stay or can not get out—those voices are muffled by the before mentioned. Then there is the hipster MFA artsy people who claim to be a part of such things as a “Chicago” or “Milwaukee” scene, which does not represent a Midwestern one, but a class—the ironic bourgeois bohemian in skinny jeans—who have no allegiance to anything unless a Midwestern one becomes fashionable.

How do you feel about social media to promote your writing, and do you use it?
Social media is a big help—I can promote my events, publications, and everything else while in my boxers. I use to think of it as a necessary evil, but it is the quickest and cheapest way to keep in touch with the world.

Favorite book?
I read poetry collections like most people read novels. One of my old favorites is James Wright’s Selected Poems, which was edited by Robert Bly and Anne Wright. A new favorite of mine is Adrian Matejka’s The Big Smoke—all poems written in the voices of Jack Johnson, his wife, or mistresses. It has been shortlisted for a National Book Award.

Favorite food?
Being from the Chicago’s melting pot, that changes depending on what smell casts a spell on me as I walk down the street. One day it’s a chimichanga burrito, then beef pad see ew, then one day my mother’s German side of the family recipe for spare ribs and dumplings with sauerkraut.

If you could have coffee (or tea or a beer) with any literary figure, alive or dead, who would it be?
I would love to pub-crawl or backpack through Europe with my poetry mentors Debra Bruce and Richard Jones—in some magical wish way that makes us all twentysomethings at the same time. I would not mind meeting Anne Sexton and Flannery O’Connor for a drink—I am smitten with them through time.

Where can we find more information about you?
My Twitter handle is @dmathewspoet. My website is http://www.davidmathewspoetry.com/index.html.