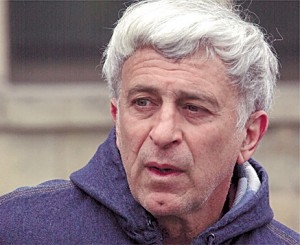 How long have you been writing?
I’ve been writing since sixth grade, when, in a poem about Columbus’ ships, I had a terrible time finding a rhyme for “Santa Maria.” I started having small things published in the 1970’s, and some books came along in the following years. “See ya” just occurred to me, but now I need a poem to go with it.

What’s your connection to the Midwest?
I was born in Michigan (Dearborn), married (first) a Nebraska woman, then one from Fulda, Minnesota, on the Great Plain. Winona, Minnesota, has been home since 1969. I think there’s too much Great Plain Writing style these days, words that are transparencies rather than contexts too. Even in the middle of Triumph of the Will Iowa cornfields there are creatures, creations, ruts, caves, inflections and innuendos.

How has the Midwest influenced your writing?
Minnesota, its long blank page winters, provides whole seasons for inwardness, and the state is small enough and its literary community connected enough to be user friendly. Things have changed some since some hotshots have published best sellers, but the quiet literary culture endures and is widespread in sometimes very small and unlikely places.

Why do you believe there has never really been a regionalist push for Midwestern writing in the past like there has with the South or even the West Coast?
There was a big (small press driven) push to promote Midwestern writing—writing about “place”—in the 1970’s. I founded a litmag Great River Review, still alive and well, on the premise that Midwestern writers, mainly of fiction, had few venues. There have been writers’ conferences and much written about the issue. But it’s faded as a literary concern, perhaps in part because there has been no mythologizer of the Midwest to compare with, say, Faulkner, and because writers like Sinclair Lewis have not made it into college classrooms. Now, moreover, it seems that people are like displaced persons, with their noses stuck in smaller and smaller screens as they walk down the sidewalk rather uninterested in smelling the flowers or naming them.

How do you feel about social media to promote your writing, and do you use it?
I think it’s wonderful to have social media to promote my writing, and I wish someone would volunteer to do all it for me. I write, and I’m running out of hours, so I don’t spend much time on-line twittering. Yes, my wife tells me when to get on Facebook, and I have a blogsite called “Downstream” with the Twin Cities Daily Planet. I write essays for it that I call chirps, not twitters, and I have high hopes that I’ll soon be discovered by the gods who rule in cyberspace.

Favorite book?
Moby-Dick. Obviously. A great book reads us even as we learn how to read from it. Even though there are very few women in it the book, that wail of a thing is big enough to speak to, and about, our feminine side.

Favorite food?
My own warm home baked bread, with garlic, butter and a good beer.

If you could have coffee (or tea or a beer) with any literary figure, alive or dead, who would it be?
I would like the two authors of Malleus Maleficarum (“Hammer of Witches,” a handbook for identifying, classifying, figuring out prosecuting and eventually murdering thousands of women) to get just a little drunk with me so I could ask them some serious questions.

Where can we find more information about you?
Just Google my name. I’m rather amazed at how much of me exists somewhere out there.