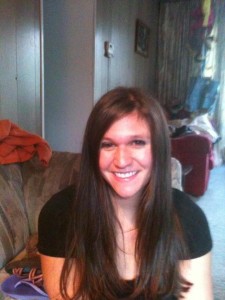 How long have you been writing?
Most of my life. I wrote a poem about a moth in the 7th grade. That seemed like a pivotal point.

What’s your connection to the Midwest?
I was born in Wichita and spent most of my childhood there. For the past five years I’ve lived in Lawrence, Kansas.

How has the Midwest influenced your writing?
The Midwesterner is a very particular kind of person. There’s a sincerity, an earnestness you find in the Midwest that I love. It’s a part of my own personality, and it’s usually in the characters I write, too. Plus, everyone is a little stir crazy because we don’t have mountains or oceans. We have to get creative.

Why do you believe there has never really been a regionalist push for Midwestern writing in the past like there has with the South or even the West Coast?
People often assume the Midwest is too gentle or bigoted (at least in Kansas) to produce anything of merit. We’re not haunted like the south or depressed and fancy like the east. We’re not as beautiful or wild as the west. But I think in many ways we are.

How do you feel about social media to promote your writing, and do you use it?
I usually don’t like using social media to promote my writing. I like to write because writing feels, in many ways, like a rejection of all the technology we’ve come to rely on. A story on paper is so simple. You have the text, the reader, and the exchange. I think bringing other mediums into the picture can ruin that interaction. Of course, it can also enhance it in other, peripheral ways. I’ve liked several of my favorite journals on Facebook, and it’s nice to see what’s going on with those publications.

Favorite book?
That wouldn’t be fair to all of my other favorite books.

If you could have coffee (or tea or a beer) with any literary figure, alive or dead, who would it be?
I don’t know if I’d actually want to meet any of my literary heroes. I recently had a bad encounter with a writer I had long admired (and still do, in some ways). I don’t think I’d want to ruin whatever I like about my favorite writers’ work by actually meeting them. I’m sure many of them would be great people, but I wouldn’t want to risk the rogue jerk/diva.