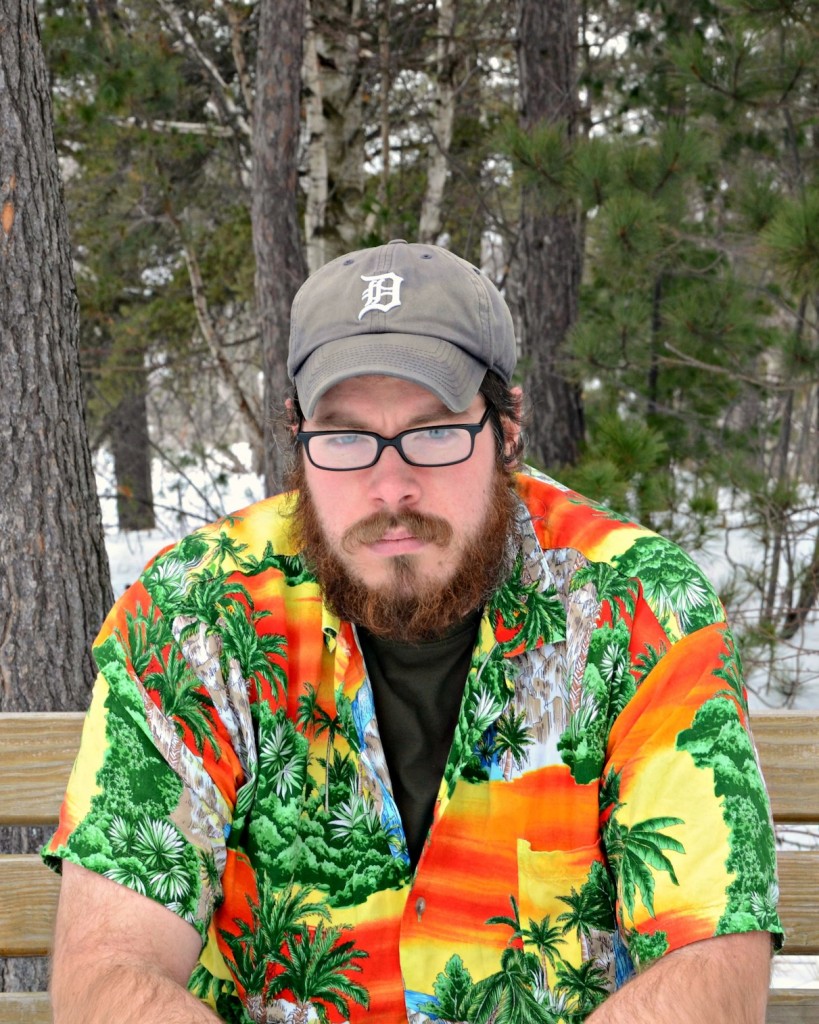 How long have you been writing?
In sixth grade, I was able to go to Ferris State’s Young Author something-or-other where I bought a book about UFOs, and one the girls in my class group found out I had a crush on her through a mutual acquaintance. It was my first betrayal, and it brought me into a world where things can go wrong. I took that cynicism with me into middle school—slightly warped and introverted—and found that writing was a good way to let people know my personality without having to speak to anybody directly. I wrote before then, too, but I don’t know why. Maybe I didn’t speak much then either.

What’s your connection to the Midwest?
I grew up in the woods of central Michigan in Isabella County. I spent eighteen years there until I moved to Marquette for college and grad school. I barely travel outside of Michigan: once to Toronto, twice to Chicago, and a school band trip to Orlando where I immediately stepped on one of those tiny, tiny lizards (unintentionally) when I got off the bus. It’s one of those odd things that let you know you don’t belong in a certain place, and now I’m afraid to live anywhere else.

How has the Midwest influenced your writing?
Absolutely the environment. I’d never survive in a city or a place without trees, fields, or water. I could probably write, but it’d be about how miserable I am, how I’d want to get back to someplace green. Find me a big lake in the Pennsylvania farmlands or Vermont or Maine and I’ll probably be fine there as well. Alaska. I could do Alaska. I had a friend spend a lot of time there, and she told me living in Alaska makes you aware of how many ways you could die. I like that.

Why do you believe there has never really been a regionalist push for Midwestern writing in the past like there has with the South or even the West Coast?
I don’t know if I have the background to answer this correctly. I think of southern pride when I think of southern writing, and it’s really no different than what we’re doing up here—obsession on what makes us us. But the west coast? I don’t know. I think they recognize themselves—probably more in the 60s and 70s—as people who need to be loud, who need to stand up and make change for the sake of American progression. I’m sure there were loud Midwesterners then (as there is now), but they probably moved west to be in the heart of it. Oh, dammit. Are we the Hobbits of America?

How do you feel about social media to promote your writing, and do you use it?
I don’t hate it as much as I used to. I understand that it’s the best way to get people to read something they normally wouldn’t have known about, but it does become irksome some days when I’m overwhelmed with so many shares and recommendations. This is my personal preference, though. People love it, and I get it. I use Facebook to promote what we at Passages North are putting on our Web site, and I do find that it’s easy to get a hold of our contributors easier through FB messaging rather than regular e-mail. Plus it builds relationships with people, which is something I want to have as an editor. Call it networking or whatever you want, but it feels like I’m working with actual people and it becomes a much more rewarding process. I like promoting them, too, but feel weird when it comes to my own stuff.

Favorite book?
David Feherty’s A Nasty Bit of Rough. If you’re a golfer and haven’t read this, get on it. Today. (This is part of a seven-way tie: Catcher in the Rye, In Cold Blood, Catch-22, The Bell Jar, White Teeth, and A Clockwork Orange.)

Favorite food?
Puppy chow. If you don’t look like you’ve been snorting coke, you’re eating it wrong. Switch this answer to French onion soup if I ever become diabetic.

If you could have coffee (or tea or a beer) with any literary figure, alive or dead, who would it be?
Speaking of coke: Hunter Thompson, but I don’t know why. I’m sure we’d get along, but he’d get awfully bored of me after a while.

Where can we find more information about you?
I’m afraid I don’t have a Web site or a Twitter thing. Google Timston Johnston and you should get some stuff, maybe more in the future. Passages has some posts under my given name (Tim Johnston), but anything other than that, not much. Careful, though: I am not THE Tim Johnston, who is much, much more published than I am. That’s why I go by Timston. You can keep tabs on me through Facebook if you want. I keep pretty regular on there, but I’m Tim instead of Timston. Good luck filtering through the hundreds of us.