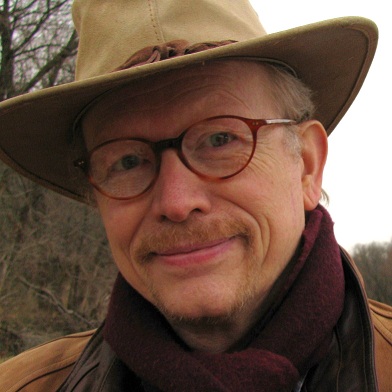 How long have you been writing?
After writing poetry in college and working with David Wagoner in graduate school I shifted to academic writing. The local ArtHaus poetry slam got me reworking poems again two or three years ago; a good thing, because when family tragedy struck in the summer of 2012 poetry was there for me, the perfect medium through which to channel powerful feelings that might otherwise have overwhelmed me.

What’s your connection to the Midwest?
People on both sides of my family have been living in Northeast Iowa for six, going on seven or eight, generations. Though I’ve lived in the West, the Northwest, and in England for about a decade of my life, Iowa has otherwise been my home.

How has the Midwest influenced your writing?
That’s a bit like asking how air affects my breathing. The Midwest is what I write. I spent a decade working on a natural history of the river basin in which I live, the Upper Iowa. The work on that was transformative. It taught me that the minerals in that river now make up my bones. It taught me that the 70% of me that is water is a moving extension of that river.

Why do you believe there has never really been a regionalist push for Midwestern writing in the past like there has with the South or even the West Coast?
That question doesn’t ring true with my experience. The first long series of books I devoured as a child was Laura Ingalls Wilder’s “Little House” books, set on the Midwestern frontier. In middle school my college-age sister’s boyfriend introduced me to Hamlin Garland because he knew chapter seven of Son of the Middle Border was set on a farm just miles from ours. My high school literature teacher made sure we read Carl Sandburg, Sherwood Anderson, and Edgar Lee Masters and put those authors on a pedestal similar in height to that on which she placed New England writers like Emerson, Thoreau, and Robert Frost. She also asked Joseph Langland, who taught at U Mass-Amherst, but who wrote poems about his rural childhood in my county, to read his work to my class. My college mentor, Gracia Grindal, was writing poems on subjects like the Iowa State Fair, and so the first books of poetry I purchased in my late teens were Lucien Styrk’s Heartland anthologies from 1967 and 1972. By the time I started college in 1975 I was a weekly listener to Garrison Kiellor’s reports from Lake Wobegon. Even today I don’t have time to read all the Midwestern authors I’d like. That’s too bad, because to take just two related examples, what books could have been as transformative for me as seeing Shakespeare with new eyes in Jane Smiley’s rendition of King Lear in A Thousand Acres or David Wroblewski’s heart-shattering version of Hamlet in the main figure of The Story of Edgar Sawtelle? Though I’ve outgrown Laura Ingalls Wilder, the frontier epics still basic to my fictional universe are My Antonia and Giants in the Earth.

Because the American publishing industry is concentrated in New York, because American cinema is concentrated in California, and because the bloodiest war in American history was fought over whether the South could retain is distinctiveness, it’s tempting to think that the literature of those places has a power lacking in other places, but that’s not true. I look forward to the “Talk of the Township” section of Tim Fay’s Wapsipincon Almanac because it does rural Iowa every bit the same poetic justice as the New Yorker’s “Talk of the Town.” I love that your journal has the title Midwestern Gothic. Since Midwestern speech patterns were chosen as the norm for national television news, and since Peoria, Illinois, was chosen as the “norm” in American demographics, it is tempting to think of the Midwest as the mind-numbing white bread standard. Instead, it has its own distinctive grit and texture, its own twisted family histories. Its funky renditions of “the normal” make people from elsewhere shake their heads in tripped-out disbelief (think here, in cinema, of the Coen brothers’ Fargo). When Grant Wood’s American Gothic is embraced as an “American” standard, that’s cultural colonialism at work.

That painting is a Depression-era imaginative reconstruction of Eldon, Iowa, by Iowa painter Grant Wood, and hangs with pride of place in the Art Institute of Chicago. It’s pure Midwest, and no one would mistake it for Manhattan, or Yoknapatawpha County, Mississippi or expect to have to travel to the Getty Museum to find it. The same is true for a Hemingway Nick Adams story, a Robert Bly poem, or a Louise Erdrich novel. Pure Midwest.

How do you feel about social media to promote your writing, and do you use it?
Social media is the new and current face of writing, but I’m not there yet.

Favorite book?
The book that has had the deepest impact on my life is Dante’s Comedy.

If you could have coffee (or tea or a beer) with any literary figure, alive or dead, who would it be?
A year ago my wife and I had dinner with Wisconsin novelist Jane Hamilton. I can’t imagine a better evening.

Where can we find more information about you?
https://sites.google.com/a/luther.edu/dsfaldet/.