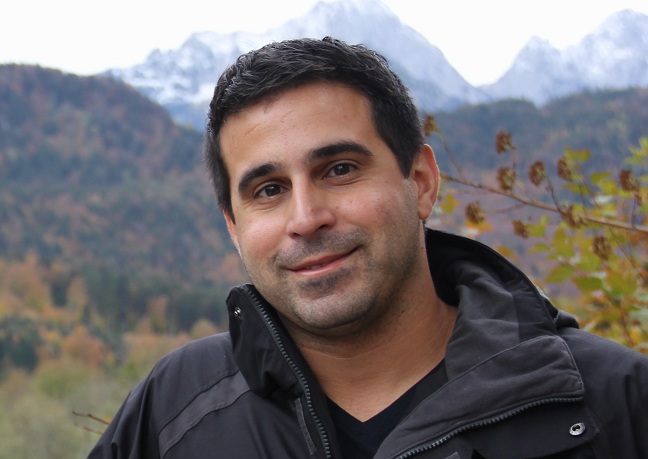 How long have you been writing?
About three years ago, I sat down for a haircut. My stylist asked, innocently enough, “What do you do for a living?” “I’m a writer,” I said, and it was the first time I believed it, I think. Up until then, writing had been this thing I’d done in the evenings or when I was messing around at work. Even when I graduated from Columbia College with a degree in fiction writing, I identified with other occupations: retail, account management, business development. So while I’ve been writing all my life, it isn’t until recently—first at DePaul University and later at the University of Nebraska-Lincoln—that I’ve completely and utterly dedicated my life to it.

What’s your connection to the Midwest?
I was born and raised in Miami, Florida. And so I spent most of my free time at the beach, in the Florida Keys, or exploring the Everglades. But perhaps because I was an undergraduate student—commuting, balancing work and a full course load, figuring out what college was all about—I never quite connected with my peers. Midway through my undergraduate work, I moved to Chicago for the first time and attended Columbia College. I loved Chicago so much that seven years later, newlywed, I moved back with my wife. Now I’m in Lincoln, Nebraska.

I love the Midwest, the cities, the country, even the snow and the sound of shovels scraping the sidewalks on cold winter mornings. I didn’t grow up with any of this—the changing of the seasons—and there’s something invigorating and productive about it. So while I may yearn for family and the ocean at times, I very much identify as a Midwest writer, reflecting on my Cuban heritage.

How has the Midwest influenced your writing?
I didn’t realize how Cuban I was until I moved away from Miami. There were certain things I took for granted: a cup of Cuban coffee at a local bakery, a croquetta preparada sandwich, dominos with my family and friends, a kiss on the cheek for hellos and goodbyes. In many ways, distance helped me understand and appreciate my cultural background as it clashed with the Midwest. At times I even found myself speaking Spanglish to my peers, out of habit. But it also helped me realize that being Cuban-American was only a single thread in my identity.

It took me a long time to write Chicago-based stories. I needed to become intimate with the city—it’s history, culture, literature. Even now, I realize how little I know about the Midwest. My first drive out from Chicago, to Lincoln, was the first time I’d seen Chicago’s urban center slowly become the suburbs and slowly become the countryside. It’s easy to forget, living in Chicago, that the city is surrounded by farmland. These observations may seem commonplace to anyone originally from the Midwest, but it’s new to me, and I’m fascinated by it, so I write about it sometimes.

Why do you believe there has never really been a regionalist push for Midwestern writing in the past like there has with the South or even the West Coast?
There’s certainly a long history of Midwestern writing: Willa Cather, Lewis Sinclair, Sherwood Anderson, Theodore Dreiser, Gwendolyn Brooks, and so on. But when I think of these authors, I don’t think of them as regionalist in the way that I consider, for example, Faulkner and O’Connor Southern. There isn’t a certain style, story, author, representative of the Midwest, I think, and this works in the Midwest’s favor. We’re a rather flat crossroads between the oceans and the mountains—at once rural and culturally sophisticated—and I could see how pushing for a specific regional identity, diverse as Midwest writers are, might be rather complicated, maybe even alienating for some Midwestern writers.

How do you feel about social media to promote your writing, and do you use it?
Every so often, I’ll share some news on Facebook. It’s for my family and friends, really. But I follow a whole bunch of writers and journals. It’s a great way to stay connected or distracted.

Favorite book?
The Coast of Chicago by Stuart Dybek.

Favorite food?
Ropa Vieja, rice, with a side of malanga frita.

If you could have coffee (or tea or a beer) with any literary figure, alive or dead, who would it be?
Spalding Gray. Whenever I’m stuck, I listen to his monologues, or I read his novel Impossible Vacation.

Where can we find more information about you?
E-mail me at RP7983@aol.com.