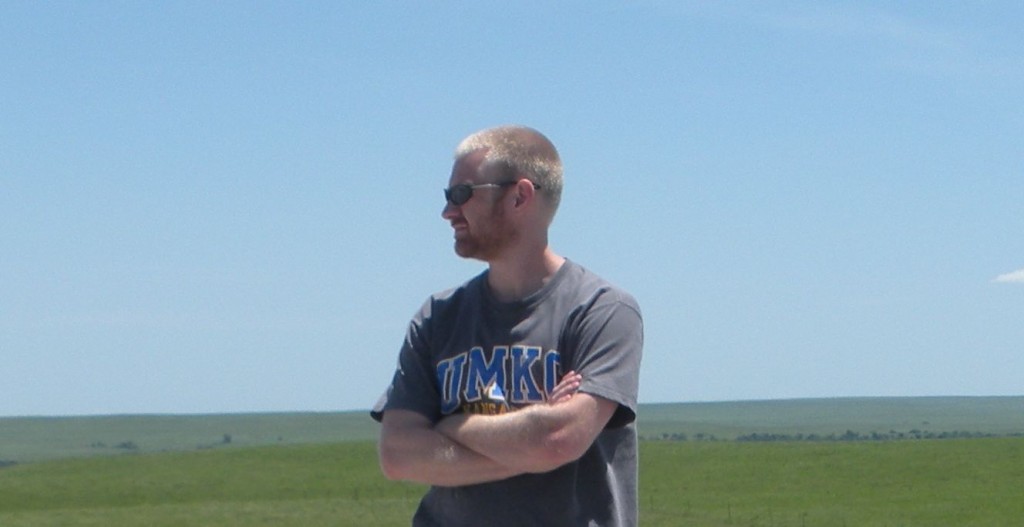 Casey Pycior’s story “Through the Gears” appears in Midwestern Gothic Issue 13, out now.

How long have you been writing?
I’ve been writing seriously since around 2008 when I started my MFA at Wichita State, but all through my undergrad and even through my MA (in Literature), I was always drawn more to the writing and the writers than I was to literary theory. I guess even as kid, writing came easily to me in school, but I never really thought of it in terms of something I could actually do as a career until much, much later.

What’s your connection to the Midwest?
I was born and raised in Kansas City (on the Kansas side—believe me, it matters), and I’ve never lived anywhere outside of the region.

How has the Midwest influenced your writing?
How hasn’t it? It’s honestly all I’ve ever known.

The Midwest is a land dominated by what seems to be absence, by what isn’t readily visible. And I think growing up here, whether I’ve realized it or not, has taught me to pay attention and to look more closely at the subtleties—because I have to—in order to see what’s really there. And what is there, in the spaces and places where many people overlook, is more than enough to fuel my writing for a very long time to come.

Why do you believe there has never really been a regionalist push for Midwestern writing in the past like there has with the South or even the West Coast?
This is actually one of the central questions I’m focusing on for the academic part of my PhD, so I’m seriously invested in it. The short answer is that there hasn’t been a push because most people (excluding us, of course) see the region as “fly-over” and barely even consider it a region at all. But the answer to why it isn’t viewed as a region is more complicated.

I don’t think there is any one reason why the Midwest isn’t viewed as distinctly regional—in the way that New England, the South, and the West are. The most obvious factor is that the region is so geographically diverse. North Dakota, Missouri, and Indiana, for example, are all part of the same region (if we can even agree on the 12 states that US Census considers “the Midwest”). It’s made up of plains, farmland, major urban centers, suburban sprawl, and everything in between. The Midwest also borders two of the other regions, three if you consider Pennsylvania part of New England, and there are interesting regional conflations on these borders. Two good examples would be Donald Ray Pollock’s Knockemstiff and Daniel Woodrell’s Winter’s Bone.

One of the main reasons, however, is that the Midwest lacks a clear, culturally agreed upon history. New England has the colonies and the Revolution; the South has slavery and the Civil War; and the West, though not of its own making, has the mythical Wild West and all that comes with that. The Midwest has important history, sure, but not of the regionally unifying kind. What we do have are small, local histories spread throughout the region that people attach themselves as a way to fill the void of the “big” histories. And I see this as one of the factors that in an odd way unifies the region. Kent Ryden argues that the Midwest is more like a mosaic, a region made up of small places that, when you step back from it, begins to reveal itself as something larger and more unified than it initially seemed. I find this a really helpful way of thinking of the region.

But really, though, no regions are homogeneous. It’s simply our cultural perceptions of a place that make it seem as if a region, like the South, is a singular thing. To a certain extent, each region is responsible for creating and/or perpetuating these ideas. I think that’s where a journal like Midwestern Gothic is doing really excellent work to push the Midwest to the forefront of any discussions of American regional writing.

How do you feel about social media to promote your writing, and do you use it?
Like a lot of writers, I have mixed feelings. Actually, I’m not even comfortable with the idea of “promoting” myself in any way, but social media has become the most acceptable (and probably easiest) way to do it. And, despite my misgivings, I do post to Facebook when I get a story accepted. I’m new to Twitter, but I’ll probably start utilizing that as well. For me, social media has become a kind of necessary evil, though it’s something I should probably learn to accept.

Favorite book?
If pressed to pick one, I’d probably have to go with Woodrell’s Winter’s Bone. But my list of favorites is long and growing longer. Some recent favorites: Ben Fountain’s Billy Lynn’s Long Halftime Walk, Peter Orner’s The Last Car Over the Sagamore Bridge, Alan Heathcock’s Volt, Bruce Machart’s Men in the Making, Jesmyn Ward’s Salvage the Bones, Melinda Moustakis’s Bear Down, Bear North, and Jess Walter’s We Live in Water. I could keep going, but I won’t.

Favorite food?
Barbecue, but I have to qualify that—it’s got to be KC barbecue. Accept no substitute.

If you could have coffee (or tea or a beer) with any literary figure, alive or dead, who would it be?
Another tough one, but I’d say it would have to be Raymond Carver, and I suppose the drink would depend on if the Carver I’m sitting down with is sober or not. Either way, he was the first writer I read who wrote about working class people in a way that, up to that point, I didn’t know was possible in literary fiction. Some of his stories frustrated me, and at times they still do, but I’m still drawn to his work. Despite all the controversy surrounding his relationship with Gordon Lish, Carver is still that touchstone writer for me, and it would’ve been really cool to have met the man.

Where can we find more information about you?
You can reach me by email at caseypycior(at)gmail.com, or (and I can’t believe I’m actually writing this) you can follow me on Twitter at @CaseyPycior.