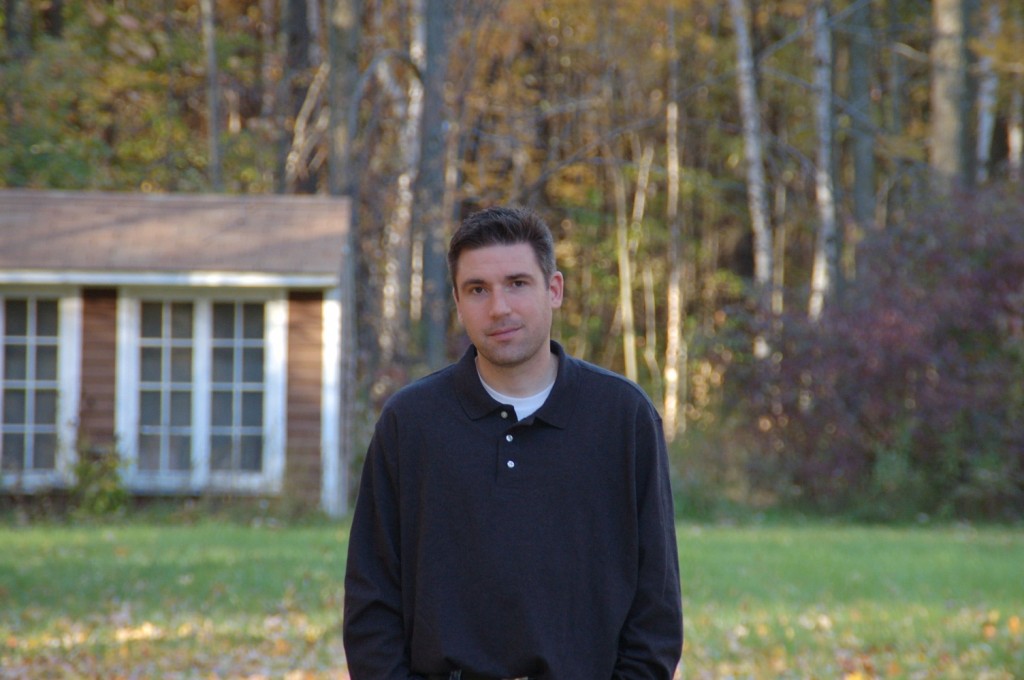 How long have you been writing?
Since I was a kid who could read. I had a small typewriter and a blank pile of paper that was to contain my epic plagiarizing of The Guns of Navarone. I started to get serious about writing again when I was an undergraduate at SUNY Buffalo, and some classes with Carl Dennis and Raymond Federman helped move me along. Interestingly, I never had any success until I moved to the Midwest, so I owe it everything.

What’s your connection to the Midwest?
I was born in Buffalo, but since I finished undergrad it’s been all Midwest all the time. I moved from Buffalo to Ames, to Cincinnati, to Green Bay. I am at the point now where I’ve lived over half my life in the Midwest and it’s truly become my home. I was married here, began my career here, bought my first house here, and our kids were both born in the Midwest. I also feel like I finally have that secret “it” that makes someone a Midwesterner.

How has the Midwest influenced your writing?
I don’t think I had a setting for anything I wrote until I moved to the Midwest. It was the first time that a landscape lived for me, and it lived in a way that felt like a personality. I also think people attach a false “sameness” to the Midwest. Unlike any place I’ve lived, the Midwest often has completely different cultures and ways of life separated by a ten-minute drive or even a three-block walk. If I walked out of my door right now, I could be at an abysmal Wal-Mart in five minutes by turning one direction, yet just as quickly be standing in a field of sandhill cranes by turning the other. It’s an ontological shift.

Why do you believe there has never really been a regionalist push for Midwestern writing in the past like there has with the South or even the West Coast?
Again, I think it’s the myth of homogeneity. The Midwest has never received proper acknowledgement for the complexity of its cultures. I also feel that many people find the complexity of the Midwestern landscape to be largely internal, and maybe this is too easily connected to brooding or something ridiculous like that. It’s as if there are only two poles in the Midwest with nothing living in between—on the one end you have a blonde parent and child playing catch in a cornfield somewhere (ah, The Natural), while on the other you have pregnant skies that poop nothing but tornadoes and ice storms. All of that being my said, my wife is currently working on the great Midwestern novel, and once that’s done, I’m sure the planets will realign and allow the Midwest to finally assert global and galactic dominance.

How do you feel about social media to promote your writing, and do you use it?
I think it’s fantastic. My first attempts at social media were epic failures, especially Twitter, but then I learned to approach it with a goal. In my case, I wanted to learn as much about digital humanities as possible, and by following people working in that field I learned more than I could have hoped for in a very short time. My wife (fiction writer Rebecca Meacham) then used this approach in trying to make literary connections, and I soon adopted her strategy. The results are incredibly successful beyond promotion, as I’ve made some very meaningful connections on social media. As a matter of fact, just before I sat down to write this I was working on a poem exchange/critique with a writer and editor I’ve only “met” through Twitter. In short—and I know this cuts against the old school—I highly recommend it.

Favorite food?
My mom makes the absolute best sauce and meatballs on the planet. When she comes out to visit us and her grandkids, her entrance into our home is conditioned on her making this for dinner.

If you could have coffee (or tea or a beer) with any literary figure, alive or dead, who would it be?
Wow. Just wow. I’ll try to go with the living here, and I’m struggling between Mark Danielewski and China Mieville. I’d say Mark Danielewski. I would give a minor appendage to talk to him for a few hours about House of Leaves. What was the thinking that grew into that novel? What was the daily process? Beyond the writing, what helped in the planning? Like so many, I just love that book. If Mr. Danielewski were unavailable, I’d be just as happy to talk to Jennifer Egan about how she writes such beautiful, perfect sentences.

Where can we find more information about you?
The interwebs, say @chuckrybak. I occasionally blog about teaching and higher education at www.sadiron.com. Also, there’s a great bar in Green Bay called The Republic. I am often available there for questions or conversation while watching a telecast of some sort.