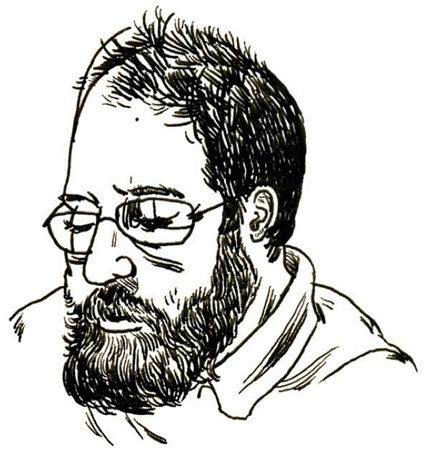 How long have you been writing?
My mother was the village librarian in Parma, Michigan, west of Jackson. I’ve been writing at least since I was in elementary school, sitting in the bay window of the library looking into the street. I recall walking from the library down to the railroad tracks, making up stories about the buildings that weren’t there. There was a cement slab across the street, between the library and feed elevator, and all the kids knew that there used to be a jail there. A little one room village jail, and it had been hit by on old trolley car (Parma was the end of the line, and the building the library was in used to be the final depot). The trolley car had jumped the tracks, crashed into the jail, and knocked the whole brick building off its foundations. One thief had been in the jail, as the kids told it, and they said he was still running.

The trolley cars were taken out a generation ago, but the scar where the tracks had been was still in the pavement of Main Street, so we all new it must have been true.

At that time there was a an old hobo who lingered in town, and my mother took to calling him Rocky Balboa. He’d come in and curse her out in some cant no one could understand, and once he left a dead raccoon in the book drop box. She’d yell at him to get on out, and I just knew he was the old thief that had escaped, though I suppose the years didn’t all line up. He was sour smelling, and thin as a rake.

But once, during the strawberry festival, he came down into the cool basement of the United Methodist Church where you could buy slices of strawberry pie, and he sat down at the old upright piano they used for choir practice, and he played some complicated rag time, which was the first time I had ever heard music of that sort, and I decided people were more complicated than they appeared.

What’s your connection to the Midwest?
My great grandfather was an old Swede in Crystal Falls in the Upper Peninsula where he was the baker, and his old wife sold flowers from her garden. Their son was a school administrator over in South Haven, Michigan, where he married the gym teacher, who was herself defended from minor Scotch-Irish gentry that had settled in Illinois at the start of the 19th century. Granddad (after he died) gave his body to the University of Michigan, where he had gotten his Masters 50 years earlier, and where his future bride had been secretary for Biggie Munn before he became head coach for the Spartans. My mother’s folk settled in the mountains of Northern West Virginia just south of Pittsburgh. They won their land as payment during the Revolution. I supposed my family has been living somewhere around the Great Lakes, or in the Ohio River Valley, for as long as there has been a country. It was the West when the earliest showed up, and its status as “middle” west has arrived around our ears slowly.

How has the Midwest influenced your writing?
I think I might have started this magazine if you guys hadn’t. When I was a boy, in the first grade, we had a huge map of Michigan up on the wall in our cafeteria, and our teacher read us Paddle to the Sea by Holling C. Holling. I knew even then that my Grandmother’s grandfather was a river boat captain on the Ohio River, and the whole idea of this inland sea way, this water system, that ran from Nova Scotia down to New Orleans, that we were this other country, this old French Country that might have been… I don’t the question can be underestimated. My son, Oscar, named for my grandfather, has a map of Michigan that I painted in his room, just like the one from Parma Elementary that I grew up with.

Why do you believe there has never really been a regionalist push for Midwestern writing in the past like there has with the South or even the West Coast?
I’d hate to speak ill of anyone. I can only say that the lack of a cohesive literary culture in the region has always pained me. I only want to do my part in making one. But in doing it, we need to make a grand claim of territory. I claim Old France, all of it, as our domain. This is an ancient place, home to Mound Builders centered in Cahokia, French aristocrats speckled along the water ways from Quebec to Detroit, to La Salle and St. Louis and New Orleans; British settlers, German farmers, Swedish Miners and Finnish Lumberjacks. We’ve embraced Polish factory workers, and Arab Merchants, Somali school boys, and all the dispossessed freed slaves as they marched north out of the shadow of Jim Crow. And each has remade this place as their own. The Midwest belongs to so many different people, so many different cultures, so many different gods. We claim the edges of the prairie, the western mountain ridge of the Appalachians, the great Canadian Shield north of Lake Superior. If you are going to say we are the Middle West, mean it. There is the East, the South, the West. And we are the crossroads, the main arterial path, the fertile collision.

We are Mark Twain’s country, and the birthplace of Ambrose Bierce. Jay Gatsby walked the shores of Lake Superior when he was a boy, just as Hiawatha had done before him. This is Carl Sandburg’s prairie we’ve inherited, and we sit underneath Frank Lloyd Wright’s sky.

When George Washington came out to the edge of his domain and started the war the colonist refused to pay for, this was the land where the French and the Indians were. This was the land he saw.

How do you feel about social media to promote your writing, and do you use it?
I’m on Twitter and on Instagram pretty regularly, in both cases as @fritzswanson.

Favorite book?
I think it’s a four-way tie: Gilead by Marilynne Robinson, The Eros of Mourning by Henry Staten, Nine Stories by Salinger, and From Hell by Alan Moore and Eddie Campbell.

If you could have coffee (or tea or a beer) with any literary figure, alive or dead, who would it be?
Benjamin Franklin. And all we would do is set type.

Where can we find more information about you?
fritzswanson.com (though that needs to be updated), or on Twitter and Instagram @fritzswanson