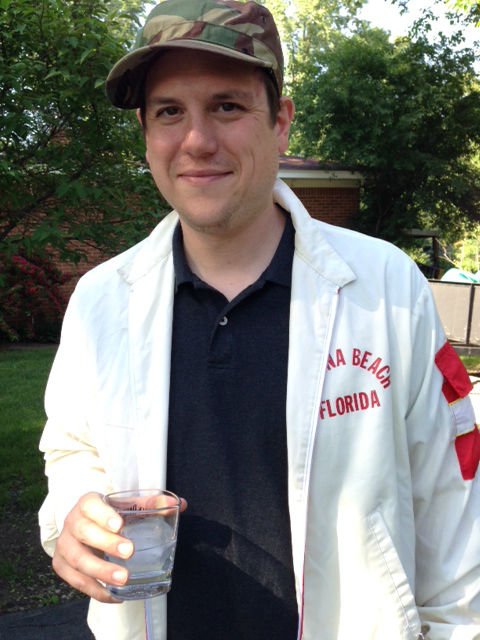 What’s your connection to the Midwest?
My whole life is connected to the Midwest, specifically Michigan and Chicago. I was born in Bay City, Michigan and raised in the Detroit area, where I went to Wayne State University. After college I lived in Chicago for several years before moving to Northern Michigan to be a crime reporter, a beat I remain on at The Ann Arbor News. There really is no better way to learn a town, a county, a region, a place than reporting on it for the local newspaper.

How has the Midwest influenced your writing?
The Midwest made my brain and tongue. Its images are what my mind’s eye conjures and reshape when writing fiction. The sounds of its nature and people’s voices are behind the sentences. I’m guessing this is the same for anyone who tries rendering life on the page in any part of the world. I internally know the chirp of the cicadas in Michigan, as well as the glow of fireflies at dusk and the yawp from a drunk at the end of the roughneck bar in the same way a writer on the other side of the world is intimate with their own comparable sounds and images. And there is something specifically particular, peculiar and wonderful about every small space.

Why do you believe there has never really been a regionalist push for Midwestern writing in the past like there has with the South or even the West Coast?
The South has a history of epic brutality and conflict that are downright biblical. It was ripe for mythmaking, something folks like Faulkner and Flannery O’Conner, two of my favorites, worked at their whole careers. On a large scale, the great moral conflict of slavery and its aftereffects, I believe, drives this. Slavery is the dirty, rotten heart of our American story; the Civil War its bloody culmination. It’s something we naturally want to brood on. Who isn’t kept awake by the horrible things they’ve done? The South alternately has a rich tradition of music, storytelling and good food, too. There’s the question of how to reconcile these two Souths and make sense of this past where pride mixes with shame, and what does it mean in the present. Critics, editors and readers naturally respond to this.

More briefly, concerning the West, there is the conflict of following your dreams only to discover that it’s not all it’s cracked up to be. The mesmerizing possibilities versus the reality that life is hard anywhere you go. You also have your outlandish, outsized characters, from cowboys to movie stars.

In a way, the Midwest can seem like a lump of bland mashed potatoes comparatively. The land was flat and prosperous. Its settlers were quiet and industrious, humble and polite. It’s no surprise television broadcasters emulate our accents to earn the viewer’s trust. The Midwest is the house parents don’t mind having their kids come over to play at. We work hard and then go fishing or work on muscle cars. Our conflicts have always been more subtle. Many of our native writers got out of the Midwest to write about more dramatic places (Hemingway, Fitzgerald) and those who stuck around generally examined the charm and hypocrisies of small-town life (Sherwood Anderson, Sinclair Lewis).

But things have changed since those fellas were around. The Midwest isn’t the staid boom town of George F. Babbitt anymore. The evaporation of manufacturing jobs has left the Rust Belt rustier and crustier than ever. The utter collapse of a big city like Detroit is something that has never been seen before and is rife with drama. In many small towns, meth is more readily available than a decent job. There has never been a better time for writers to try and make sense of this region and examine our own myths.

How do you feel about social media to promote your writing, and do you use it?
It’s crucial. As a journalist, I use Twitter and Facebook daily to not only spread content but connect with readers and sources. As a contributing editor of the literary journal, the Great Lakes Review, I started an online “Narrative Map” essay project. It’s pretty simple. The writer produces a short essay or sketch that deals heavy with place and I pin it on a Google Map. The reader can hover over the map and click on the points to read about that place. Check it out: http://greatlakesreview.org/narrative-map/

If you could have coffee (or tea or a beer) with any literary figure, alive or dead, who would it be?
Absinthe with Rimbaud.

Where can we find more information about you?
I have a website here: http://johncountsontheinternet.com/. My work as a crime reporter can be seen here: http://connect.mlive.com/staff/johncountsaa/posts.html. Facebook: https://www.facebook.com/john.counts.39. Twitter: https://twitter.com/John_Counts I run the Great Lakes Review’s website, which is here: http://greatlakesreview.org/