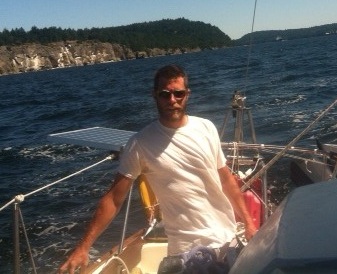 How long have you been writing?
Not sure. I want to avoid pretense here. I don’t come from a family of writers, but they all tell stories. Even putting strange twists, maybe a little more on the tail of something for emphasis, to everything they say. Not for the reaction, but because they want the listener to feel what they felt. They want that emotion. That’s a skill. The power to withhold in a story. To have that patience. That’s a hard discipline to learn. I’d go back and think about a story I told and think, I should’ve held back there, or, I should’ve told about the cardinal that was singing in the tree. That’s the fortune to writing. You can take a day or a year to create a scene that may only last a few seconds in the whole of the story. You can go back and get the lighting right, the smell of the room, the temperature, the toothless guy sitting in the corner, mumbling to himself, maybe, whittling a stick, his jaw working like he’s chewing a piece of fat. There’s little risk in ruining it. Unless, of course, you don’t work hard enough to find the right words, then the moment the inks hits you’ve destroyed it all. That’s the thrill of writing it all down.

What’s your connection to the Midwest?
I was born in Minnesota. My parents are from Decorah. That’s a small town in northeast Iowa. We were raised as Lutherans.

How has the Midwest influenced your writing?
It’s home. Born there and then move away, those places remain in existence but they become fictitious the moment you bring them back. That piece, “The River, is a chapter out of a novel I recently finished, Rigby Sellers. I’ve always been interested in dichotomy. In juxtaposition. The novel is set in Iowa, along the Mississippi—a very quiet place—but it could just as easily have been set in Arkansas or Minnesota or Germany—the place has no significance. What matters is the story and how it is set in the landscape. How the characters live in it. How they talk. How they respond to the landscape and vice versa. You have to have a certain mastery of the way people are composed in a place to make it believable and compelling. It just so happened Rigby Sellers is a book about a drifter living in a rundown houseboat along the river who begins haunting the surrounding area, so it was my obligation to paint in the world of that river country around him. Paint it to his model. The place is as much a reflection of the characters as the characters are of the place. Rigby, being a spooky guy, better not be looking into clear, bright water.

Again, it’s about getting the lighting right. All the harsh little details. The cadences of the physical world. My imagined Iowa against the real one. The summer months when the air is heavy. The hot days when you can smell rain. Limestone has a very specific smell when it’s wet and the day is humid. Early summer when the cottonwoods along the banks seed the air and the bolls drift like things caught in a current. The variety of inflections a red-winged blackbird can have. These are the things you can’t know unless you’ve spent some time standing around with your hands in your pockets. Yet this is all in support of the story. How your character gets from A to B. People are critical. Paucity of details can be smelled a mile off. Botch that and it’ll have your reader reaching for the TV remote very quickly.

I’m influenced heavily by painters like Andrew Wyeth or Ed Hopper, how they painted a simple scene, some times a silent scene, and made it holler. There’s a Wyeth piece called Snow Flurries—quiet setting, brown grass, some snow dusted about in the swales of this hill—but its oddity, the bit that makes it all work, is a couple of fence posts standing in the foreground. The woman who owned that painting said those posts bothered her, but Andrew countered, saying, “But by taking out the fence posts I think I would have gone too far. I think you can overdo it in oversimplification.” The painting is not about that hillside. It’s about the crippled fence posts, how they got there, how are they still standing, and why hasn’t anyone tended to them? That’s how I feel about writing a story set in a pretty landscape. Easy to be too idealistic. You need to work hard at getting rid of the sentimentality. Even among the limestone and blackbirds and cottonwoods there must be something hell-bent on disrupting it. Like Hopper’s work: what made that woman look so longingly out that window in the morning? There’s a whole book there.

Why do you believe there has never really been a regionalist push for Midwestern writing in the past like there has with the South or even the West Coast?
I don’t agree with that. There’s Hemingway, Fitzgerald, Cather, Rolvaag, Sinclair Lewis, the Enger brothers—Lin and Leif, Stanley Gordon West, Garrison Keillor, Tim O’Brien, Chuck Klosterman, Dave Eggers, Roxane Gay—there’s a long list. As I said in the previous question, it’s not the location; it’s the story in that location. Regionalism is a cancerous term. It’s like rust. I went to university in Montana and there were a lot of “regional” writers there. A River Runs Through It came out and a lot of people began to see themselves as “Montana” writers. Cowboy poets. Fly-fishing memoirists. Regionalism does a great job of masking bad writing. Readers (and writers) get wrapped up in the mystique, the romance of a certain place they enjoy, and it allows for sloppy sentences to enter. You’re not thinking about a run-on, or a poorly developed character because you’re seduced by your notion of big mountains or Manhattan nightclubs. Thomas McGuane was talking about regionalism in an interview with the Paris Review. He said, “…you can use nature to charge a fictional landscape with powerful results. I have no interest in replicating Montana or rendering landscapes in a recognizable way, but I do know there is something forceful about these landscapes that should turn up in language.” No one is born a regional writer. You either choose to be or choose not to. You have to work hard to keep from taking the shortcuts.

How do you feel about social media to promote your writing, and do you use it?
I think it’s a free way to advertise. It also allows for a lot of apocryphal support. As an editor at Dock Street, I use it to get the word out about the books we’re publishing, the authors, readings, events, etc., but I’ve also experienced a lot of phoniness surrounding it. At times it feels like high school—who has the most followers, who said the wittiest thing—everyone wants to sit at the popular table. But it’s also done some really nice things for us too, nice things for our authors. A lot of pre-orders came in the week we announced Sara Lippmann’s Doll Palace, and that’s where it’s warming to see a community of people fully supporting an author.

As for myself, I don’t use it personally. Only in regards to Dock Street. There are so many distractions for a writer these days. A writer should be focused on their work and not what someone is hacking out in 140 characters. For that matter, they shouldn’t be too focused on who will publish it or where they will publish it or who can endorse it or whatever else. I’m straying from the question here a little, but I write almost exclusively on a typewriter, have for quite some time, to avoid the distractions. Just like Wyeth using egg tempera or Hopper working in charcoal or oils, I see the typewriter as a medium to tell a certain kind of story on. If you work longhand, you might enjoy the way your letters are spelled out, your penmanship. A computer may allow a stream of conscious style to flow better. I enjoy the austerity of the ink on the paper. I like the mechanical side to it all. And there’s no email alerts going off, or the temptation to watch something. When I revise I type on a separate piece of paper and staple it to the manuscript. It’s all very crude and antiquated but the attention to the story is greater. Physically stapling in a new chapter lends itself nicely to the final look of a book. But of course transposing the stapled manuscript to a computer is rather boring. The enjoyment of the process stalls out.

Favorite book?
Too many. The Things They Carried has been one my wife and I have repeatedly read aloud. The Collected Short Stories by Hemingway. The Great Gatsby is heartbreaking. Cormac McCarthy is kept in constant rotation—he supports Malcolm Lowry’s belief that a writer is in no way obligated to create great characters (at least morally). I’ve been reading James Salter lately. Steinbeck writes sentences that make me set down the book and have a feverish conversation, usually inarticulate, and while pacing, about how he did it, with anyone who is around—willing to listen or not. “The Open Boat” by Stephen Crane, though a short story, is a force. I recently finished Snow Hunters by Paul Yoon, which I thought was a wonderful little book. Deb Olin Unferth once told me writing her novel Vacation was like war, something I never forgot. This winter I read a novella by Derek Palacio called How to Shake the Other Man, put out by Nouvella Books. They’re doing good things. When the Emperor Was Divine by Julie Otsuka makes one reconsider what flow in a novel is supposed to look like. I also bought a couple of Elmore Leonard books from the grocery store this past fall—he was a writer who saw terse writing as a blood sport. His sentences have the ability to make even the greats look sloppy.

Favorite food?
Easy. Laphroaig 12 year (one cube of ice) and an Alec Bradley family blend cigar, followed by a supper of red potatoes, pearl onions, a generous amount of butter, and a sixteen ounce rib eye steak seasoned with salt and pepper, cooked on a very hot grill for two minutes a side, eaten outside on a summer evening while the sun lingers over the Olympic Mountains. Whenever my wife visits the godchildren in Colorado I make a ritual of it.

If you could have coffee (or tea or a beer) with any literary figure, alive or dead, who would it be?
Jeff Bezos. I’d like to spend the day skiing with him, Nordic or alpine, show him that he can be beaten, and then drink gin and try to provoke him to box. Same goes for Hemingway.

Where can we find more information about you?
I run Dock Street Press. We’re out of Seattle. Our website is dockstreetpress.com. My email is danebahr@dockstreetpress.com. If anyone feels inclined to come out Seattle way, they can come over to the house and we’ll sit out in the yard and jaw on about books. I’ve a bottle I’ve been meaning to open.