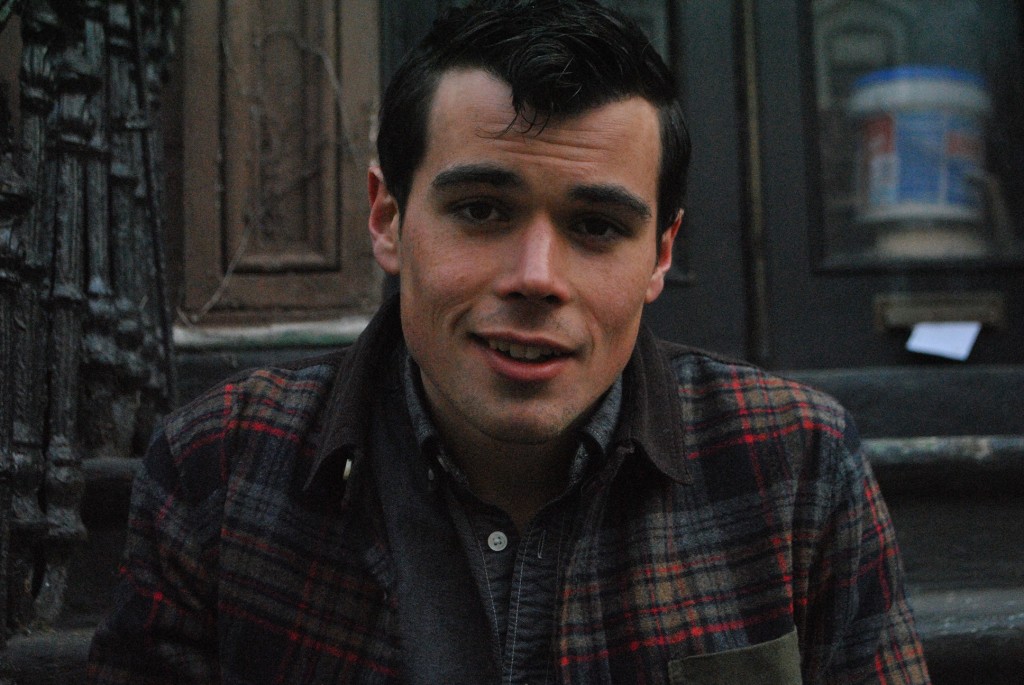 How long have you been writing?
Not too long, actually. I wrote a certain vein of moody poetry in high school and gave it up in college because I didn’t feel good or strong about it. I had a lovely English teacher in college, Susan Greenfield, who inspired me to find that innocent, childlike approach to writing creatively that I still really embrace. She pushed me to apply to MFA programs, and I owe her a huge debt always for where I’ve gotten in the one to two years since.

What’s your connection to the Midwest?
I was born and raised in Washington, DC, and spent some memorable summers in the Shenandoah Valley in West Virginia growing up. But I also spent a great deal of time with my father’s family in Rochester, New York, which is where I feel the kind of Midwestern character begins, at least on the eastern side. I hope I’m not too out of bounds in saying that. But cities like Rochester, Buffalo, Erie, Pittsburgh, Youngstown, Toledo, Lansing, and more are all cities I’ve been to and cities that share this kind of roughened spirit and character, one of resilience, maybe? Or maybe that’s too generalized. But there’s always been something beautiful to me about Rochester. It’s where I’m typing these answers out now. I feel a certain affinity with it.

How has the Midwest influenced your writing?
Most of the characters in my prose seem to stem from some kind of outskirts Midwestern scene. This kind of notion where any problem, however small, can be a test of character, or play at our notions of sorrow, loss, and love. I like letting my words dangle in open space. Float between the branches of trees and such. See actual stars. I feel very strongly that writers should care about the landscape of their language, and the Midwestern landscape is very accommodating to our roughened English vocabulary. When it comes to my poetry, I’ve been a avid reader of Philip Levine, Larry Levis, Steve Scafidi, and some newcomers like Jamaal May. Many of them work within this spacious landscape of the Midwest, and you can feel how they care about their words and their characters. How they let their words turn and move just as anyone’s dreams might. I think our Midwestern poets are some of the best ones we’ve got.

Why do you believe there has never really been a regionalist push for Midwestern writing in the past like there has with the South or even the West Coast?
This is a great question, and one I have to think very hard about. The USA is certainly a regionalist country. We are steeped in it, and it’s often quite beautiful and often quite strange. The South has long had this kind of gothic vibe in its writing that’s now very much established. I mean, the list goes on for days, with some of our best writers: Faulkner, Welty, Percy, O’Connor, Dickey, Styron. I’d have to go on forever to do it justice. And I think the South is still very much a mystery to the rest of the nation, perhaps a mystery we’ve grown fond of. Black and white writers in the South had an agenda, something to prove, coming out of the antebellum years, and they’re still proving it today. In that vein, no one has ever set a spotlight on the Midwest and said “you’re nothing,” not in the same way that this country set fire to the South during the Civil War. The Midwest has very much been a necessary place to journey through in this country’s history. I mean, look at the transcontinental railroad. So many of these small towns dotting the middle of this country’s map tie their existence to the railroad. And I think that’s part of it, and I think it is a shame, because the literature coming out of the Midwest today is extremely good and extremely charged and really lovely and striking, and it deserves its place on the pantheon. But things might change soon. There’s a lot of wonderful poetry coming out of Detroit, with Jamaal May, who I mentioned above, at the forefront, and magazines such as yours are also making a case for this Midwestern regionalist push. I have hope.

How do you feel about social media to promote your writing, and do you use it?
I got off Facebook a year ago and have no plans on returning, and I think it’s done wonders for my writing, or, at least, for maintaining the discipline of my writing. I miss it desperately sometimes, though. I have friends who might only read this if it happened across them on Facebook, and now they might never know about it. But I can’t complain. I’m on Twitter, though, which feels less personal and more flexible, in some regards. And there’s certainly something I enjoy about that.

Favorite book?
Oh gosh. I’ll name more than one. The Collected Stories of Breece D’J Pancake. Also Ondaatje’s Collected Works of Billy the Kid. Larry Levis’ Winter Stars. Mark Richard’s Ice at the Bottom of the World. Steve Scafidi’s Sparks from a Nine-Pound Hammer. Noy Holland’s Spectacle of the Body. There’s too much good to go around. Any book written by anyone who can turn a word, a line, a sentence, and make it delightful in its feeling.

Favorite food?
Chicken wings lingering for a day under a heat lamp at the Argonaut Diner in Yonkers, New York. Also, a good burger. With good sharp cheese.

If you could have coffee (or tea or a beer) with any literary figure, alive or dead, who would it be?
Probably Breece D’J Pancake, at some shoddy bar down in West Virginia. Not enough people know about him, but his one book did wonders for me. And I don’t much care if we talk. I just want to see which beer he chooses and how quick he puts it down.

Where can we find more information about you?
I’m on Twitter @themoneyiowe, and I have a website here: devingkelly.wordpress.com. I also host a reading series with some lovely fellow writers in NYC, and we’re located here: deadrabbitsreading.wordpress.com.