The Good Divide by Kali VanBaale

“The Good Divide surprises with the depth of…heartache, the intensity of the torments and jealousies that its characters succumb to, or survive.”
—Caitlin Horrocks, author of This is Not Your City

“VanBaale serves up romance, deception, and a final, surprising retribution. The backdrop is a Wisconsin dairy farm, but the subject is the wounded recesses of the human heart.”
—Pamela Carter Joern, author of In the Reach and The Floor of the Sky

“With gentle echoes of Richard Yates and Sherwood Anderson, The Good Divide…conveys the chaos and complications of domesticity—[it] is sure to make your heart simultaneously swell and splinter.”
—Mathieu Cailler, author of Loss Angeles

“VanBaale masterfully captures that crazy mystical spirit of farm folklore. Dark and delicious reading for those of us who love best the characters who’ve earned their baggage.”
—Jennifer Wilson, author of Running Away to Home

“VanBaale presents a vivid portrait of one woman’s lifelong struggle to find peace with what she has rather than what she desires. Fiction doesn’t get more real than this.”
—Publishers Weekly

“The threads […] more like full-on ropes […] tighten throughout the second half of the book […] Jean’s downhome farmwife exterior hides some dark impulses […] secrets wriggle out of the woodwork, and the stakes get higher.”
—Trish Crapo, Women’s Review of Books

“The complicated and precise construction of Jean’s character, set in a time where the choices for women are stark and few, is what makes this book such a thrilling read.”
—Shannon Perri, Front Porch Journal

“[VanBaale] creates an intriguing story that handles difficult topics as well as a narrative of struggle and conflict in a skillfully crafted nonlinear timeline.”
—Morghen Tidd, Cultured Vultures

“We love it. And we thought, this is what a page-turner feels like – the thrill of wondering what comes next and then quickly turning the page to find out, happy that the next chapter is not so long as to require us to wait until the next day because we shouldn’t stay up longer just to read and trying to figure out when we can read next when work, children and a myriad of another generally positive annoyances stand between us and the book.”
—Ben Tanzer, This Blog Will Change Your Life

“VanBaale manages the complexity of her narrative with surprising ease. For as much as the book hops through time, each scene is carefully constructed and deployed.”
—Alex Mattingly, Punchnel’s 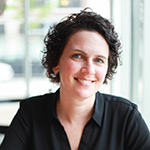 Kali VanBaale’s debut novel, The Space Between earned an American Book Award, the Independent Publisher’s silver medal for general fiction, and the Fred Bonnie Memorial First Novel Award. She is also the recipient of a State of Iowa Arts Council major project artist grant. Her short stories and essays have appeared in The Milo Review, Northwind Literary, The Writer and several anthologies.

Kali earned an MFA in creative writing from Vermont College of Fine Arts and has been an assistant professor and Visiting Writer at Drake University. She lives outside Des Moines with her husband and three children.

9 Responses to “The Good Divide by Kali VanBaale”