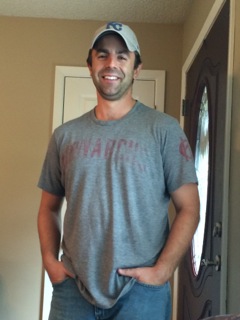 How long have you been writing?
I really became addicted to reading and writing when I was a junior in high school.  I got my head bounced off the turf during a football game that year and experienced a pretty nasty concussion, and that’s about the time the need to write really got going for me.  I’ve always kind of joked that maybe something was jarred loose inside that gray matter of mine by banging it around like that.

What’s your connection to the Midwest?
Born and raised here, and this is where I’m raising my family.
How has the Midwest influenced your writing?

There’s a particular kind of blue collar grit and sincerity that arises out of the Midwest, I think, and this is the kind of writing to which I’m most attracted.  I like getting the sense that the writer is chasing something, you know, searching for some sort of meaningful depth, and this lends itself to a type of desperation that is alive in Midwestern settings and characters — the kinds you find in Marilynne Robinson’s Iowa or Daniel Woodrell’s Missouri or Toni Morrison’s Ohio.  This is what I’m drawn to and influences me the most.

Why do you believe there has never really been a regionalist push for Midwestern writing in the past like there has with the South or even the West Coast?
Well, I think this is the case because when we talk about regional fiction there is really only one region that dominates as a genre unto itself, and that’s the writing that comes out of or is about the Southeast.  A parade of  traumas occurred there that began in the plantations and escalated with Sherman’s campaign and continued with the Civil Rights Movement and in many ways still hasn’t ended.  William Faulkner and Eudora Welty — two of the most important writers in the culture — spent their lives probing these traumas.  And such a richness of talent and content came out of the South, with writers like Walker Percy and Shelby Foote and Flannery O’Connor and Alice Walker and Katherine Anne Porter and Barry Hannah and William Styron, all writing about similar things.  To Kill A Mockingbird has to be one of the most read novels in American history.  Toni Morrison greatest work, Beloved, might be the best novel I’ve ever read, and is probably the best example of a Southern Gothic novel that I can think of, even though most of her other books are set in the Midwest.  And people will be reading Jesmyn Ward’s Salvage the Bones for decades.  So it’s just hard, I think, for any other region to compete with all of that in terms of the literary canon.
How do you feel about social media to promote your writing, and do you use it?
I’m on social media but not solely to promote my writing.  My writing is a part of me, so it’s there in some of my Facebook posts and tweets, but I’m kind of shy about it for some reason.  But it doesn’t bother me when other writers are on social media to promote their stuff or, more importantly, to engage with their readers in a way that is as real and personal as the art they create.
Favorite book?
Elegies for the Brokenhearted by Christie Hodgen.  It’s one of those books about which I can only say just do yourself a favor and read it.  You will be entranced.  You won’t want it to end.  It will stay with you for a long time.
Favorite food?
Anything my wife makes.  She makes some seriously mean fajitas.  And her homemade marinara sauce is insane.  I could go on and on.
If you could have coffee (or tea or a beer) with any literary figure, alive or dead, who would it be?
I would love to have coffee with Charles D’Ambrosio.  His stuff just wrecks me.  He’s probably my favorite living writer.
Where can we find more information about you?
I’m on Facebook and Twitter and there you’ll find me gushing about my wife and kids and tweeting about baseball and college football and some of the books I’m currently reading.