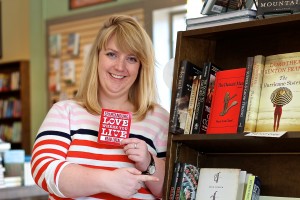 What’s your connection to the Midwest, and how has the region influenced your writing?
I was born in the great state of Oklahoma, which meant I wrote a lot of anti-Okie propaganda poems as a disenchanted adolescent. Since then, I’ve attended college in central New York, graduate school in coastal North Carolina, and I currently live in upstate South Carolina, but I have felt most at home in the Midwest. Oklahoma is not the Midwest; Oklahoma isn’t anywhere. I Googled Midwest just now and am looking at four separate maps that each delineate a different patch of states. Oklahoma is single-handedly responsible for my obsession with U.S. states and their regions; my identity actually changes depending on where I am relative to Oklahoma. In New York, I spoke for all Southerners, whereas in South Carolina, I definitely don’t qualify as Southern. When I lived on the coast, most the time I felt like a cowboy. Now that I live in the thick of Dixie, I consider myself a product of the Midwest more than anything. Where I once was teased about my drawl, my coworkers now note my flat vowels and chipper phone manners, which they call “Minnesotan.”

What do you think is the most compelling aspect of the Midwest?
The Midwest, to me, embodies the best of America—small towns, corner stores, vast distances and uninterrupted skies. As a kid, I read Ray Bradbury for his spaceships and Martians, but his depiction of fictional Green Town, Illinois in Dandelion Wine has resonated with me for eons. In old Twilight Zone episodes, the Midwest stands in for Anywhere, U.S.A—I can’t prove it, but the monsters on Maple Street had to be in Ohio or Nebraska, and what better place for it? The suburban, vanilla backdrop of much of the Midwest provides a perfect setting for catastrophe and disaster—extraordinary things hiding in the most ordinary of places.

How do your experiences or memories of specific places—such as where you grew up, or a place you’ve visited that you can’t get out of your head—play a role in your writing?
I set “Dirt” in Iowa after reading Methland by Nick Reding, but I feel meth and all of the Midwest are nearly synonymous. I have relatives with homemade prison tattoos and teeth gone gray who will laughingly relate the anecdote of setting their mattresses on fire when they passed out mid-hit. I am grateful to have grown up on a different side of the river, far from any actual danger, but I knew about it, saw it, and have been fascinated by the insanity, violence and neglect that surround meth culture ever since. Breaking Bad helped, too.

Discuss your writing process — inspirations, ideal environments, how you deal with writer’s block.
My writing process is absolutely erratic and yet highly systemic and organized. My current project, State, comprises fifty short pieces, one per state. The spreadsheet I keep for State is a color-coded frenzy full of acronyms, links to relevant articles, and notes even I can’t decipher. Meanwhile, I have a ticker tape file of scribbles, ideas, fragments, and quotes that I keep in various forms—a running Note on my phone, an actual physical notebook that I’m rarely without, and a document on my desktop. I would feel like a lunatic if I hadn’t seen other writers do this same maniacal hoarding; John Jeremiah Sullivan once showed a class of mine his “Log,” where he stored all relevant info for whatever project he was working on. When I have writer’s block, which is often, I tend to play around in my spreadsheets and notes to feel as if I am at least peripherally accomplishing something, but often times I forfeit productivity and go on a walk or read a book, where I end up thinking about new projects and pieces and stories and the terrible, thrilling cycle continues.

How can you tell when a piece of writing is finished?
I know when a story is finished solely because I’ve come to the end of it. For me, that’s very definite—I see a piece’s beginning, middle, and end very early on. As to when I consider a piece finished, pressed, polished, and otherwise ready for its close-up, I can’t say. Some stories I’ve been futzing with for years, others I have banged out on the first go-round. Some I’ve submitted three dozen times, some I only have to submit twice. When a piece is roundly rejected, I retire it for a while until I can look at it afresh, which usually means starting over completely. I edit with a blowtorch, preferring to burn things down rather than re-glue what’s falling apart.

Who is your favorite author (fiction writer or poet), and what draws you to their work?
I have too many favorite authors to count—I love contemporary writers like Jennifer Egan, Kathryn Davis, and Elizabeth McCracken, but I also love Winesburg, Ohio, Wuthering Heights and Rabbit Run. Most recently I’ve read a lot of noir and horror like Chandler and Lovecraft as well as lot of Americana true crime. My current idol is Lynda Barry, the cartoonist, who preaches a kind of messy self-acceptance that I find invigorating.

What’s next for you?
I am working to make State as great as it can be which is both maddening and exhilarating because I am constantly learning something new about some place or some time and then I want to write about it. In the meantime, I am chipping away at the Great American Tulsa novel about retired greyhounds, drag queens, and a liquor store, which I’d really like to finish if only to get that shitty first novel out of the way. Mostly I am enjoying not being in school for the first time since I was six.

Where can we find more information about you?
I am all over the internet in ways I will probably someday regret. I’m on Twitter @pintojamesbean, which is the name of my beloved dog. I keep a blog about other dogs on Instagram and the movies I watch over at www.rachel-richardson.com, where I also have copies of my large form nonfiction chapbook, Oklamerica with essays about Raymond Chandler, QuikTrip, Modest Mouse, and roller coasters. Stop in, say hi, and stay a while.