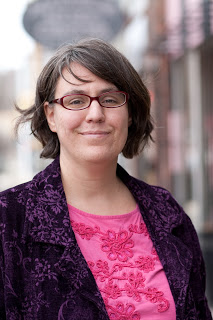 Robyn Ryle’s piece “The Kind of Story You Tell” appears in Midwestern Gothic Issue 18, out now.

What’s your connection to the Midwest, and how has the region influenced your writing?
Well, I grew up in Kentucky, just across the river from Cincinnati, so you might call that the liminal zone where the Midwest meets the South. It mattered that we were on the southern side of the river, so I’ll always think of myself as a Kentuckian, though not necessarily a Southerner. But soon, I’ll have lived in Indiana (Bloomington and Madison) longer than I’ve lived anywhere else, which is something that still feels weird. Indiana is a complicated place, but definitely more Midwestern than Kentucky.

I think where the Midwest comes through in my writing is in my obsession with place, and specifically, small towns. I feel that people who aren’t from small towns, who have never lived in small towns, can be very dismissive and disdainful about small town life and small town people. I think most recently about shows like The Unbreakable Kimmy Schmidt and the way it depicts small town life in Indiana—basically as a source of easy jokes. The only time people in the tiny towns I know make the news is if something freakish and horrible happens—a cult or a tornado or a school shooting.

But the lives of people in small towns like the one where I live now are just as complicated and nuanced as any New Yorker. There’s diversity, too, even though you might have to look a little harder for it. People here have fascinating stories when you take the trouble to find out. In my writing, I try my best to convey that the lives of people in small, Midwestern towns are interesting and important and worth hearing about.

What do you think is the most compelling aspect of the Midwest?
I went to college in Mississippi and taught for a year in Birmingham, Alabama—both places I love. But there’s a kind of concern with status and appearances, at least among middle class white folks in the South, that’s not as prevalent in the Midwest. At the colleges in the South where I taught, kids dressed up to go to class. They don’t here in Indiana. In the Midwest, and especially in small towns, you often can’t tell the difference between the richest person and everyone else. I think this goes with the kind of aversion to showing off that Midwesterners have. I think about my parents, who firmly believe that you should always work hard and do your best, regardless of whether anyone’s paying any attention or not. I guess it’s a kind of simplicity that I find appealing.

How do your experiences or memories of specific places—such as where you grew up, or a place you’ve visited that you can’t get out of your head—play a role in your writing?
Right now, I’m lucky enough to live in an amazing town, Madison, Indiana. It’s on the Ohio River and has the largest contiguous historical landmark district in the U.S.—55 blocks of buildings that date back to the 1800s. My house is 175 years old. We’re tucked into the river valley and it’s just beautiful—the kind of place people visit and then come back to stay. A lot of my stories are inspired by living in Madison—the landscape and the people. Madison is pretty much the small town where most of my stories take place.

A friend of mine sent me this Joan Didion quotation: “Certain places seem to exist mainly because someone has written about them. . . a place belongs forever to whoever claims it hardest, remembers it most obsessively, wrenches it from itself, shapes it, renders it, loves it so radically that he remakes it in his image.” This is what I aspire to do with the places I’ve lived and loved. If you asked me why I write, this would be one of the top three reasons—to capture places in this fierce and loving way.

Discuss your writing process — inspirations, ideal environments, how you deal with writer’s block.
I used to be all about Stephen King’s idea that you need a place with a closed door to write. Then I realized, I really don’t. I can write on the couch with my husband humming in the next room and my step-daughter doing homework. Sometimes I need a quiet space, but I can’t stay there for prolonged periods of time. I like the idea, anyway, of writing in the midst of life. It’s messy, but okay.

I like to work on a lot of different projects at the same time—some of them short stories, some longer works, some of them nonfiction. So when I get stuck on one thing, I often switch to another. But sometimes, I get stuck on everything and then I just stop for a while. I read. I cook. I garden. I write a letter to a friend. I lay on the bed next to my cat and take a nap. It’s okay. If I need to write, I will.

I get ideas everywhere. A friend asked me if it was hard to come up with ideas to write about, and I told him, no, that’s the easiest part. Writing is a way of seeing the world. Everything is interesting. That’s also on my top three list of reasons why I write—because of the perspective it gives you. Sitting in the parking lot waiting to pick up your child after band practice. A Twitter contest to pick the face of Major League Baseball. The people who come live in the house across the street every summer to count the birds in the wildlife refuge. A story your husband’s cousin tells when he comes to visit from Chicago. Those can all be stories. Anything can be a story. You can take any little thing and give it a meaning it didn’t have before. That’s amazing.

How can you tell when a piece of writing is finished?
When I’m ready to let my husband read it and he says it’s okay. He doesn’t write fiction, but he has a great love of language and really, he should have been an editor. Sometimes I ignore what he says, and every now and then I decide a piece is done without him reading it. Either way, it’s just a gut feeling. That’s done. Of course, the gut feeling is wrong sometimes and I get impatient and send stuff out too early. But I think I’m pretty good at sitting with a story. Chiseling away at it and then letting it go.

Who is your favorite author (fiction writer or poet), and what draws you to their work?
I would love to be able to write something like Olive Kitteridge, by Elizabeth Strout. I think that might be the perfect book. You get this incredibly strong sense of the place and the community. Olive is one of those characters who is so real, she comes up in conversation with my friends and my husband all the time. I live in fear that I might be Olive, even though I love her as a person. The stories are heart-breaking and funny at the same time, which is so hard to do. I read that book over and over again, trying to figure out how she does it. Trying to reverse engineer it.

Also, I have to mention Wendell Berry. His poetry and his fiction. I cry like a baby at the end every time I read his novel, Jayber Crow. When he writes a place, he writes the whole place—the people, the landscape, the plants, the animals. And he writes it beautifully.

What’s next for you?
I’m super excited about my chapbook of short stories coming out in 2016 with WhiskeyPaper Press. In June, I’ll have a short story at WhiskeyPaper and an essay in the Big Truths Nomfiction Anthology, which is going to be spectacular. I also have a short story at CALYX Journal—“The Face of Major League Baseball”—in September of 2015. I’m working on a set of linked short stories that all take place in a community garden. In general, I want to write more stories with animals. If I could get away with it, I would write about nothing but my cat.

Where can we find more information about you?
I write about small town life in Madison, Indiana, and a whole lot of other things at my blog, you-think-too-much.com. You can find a list of all my stories and essays at robynryle.com. I’m on Twitter too much (@RobynRyle) and Tumblr not enough (robynryle.tumblr.com), which works out just about fine.