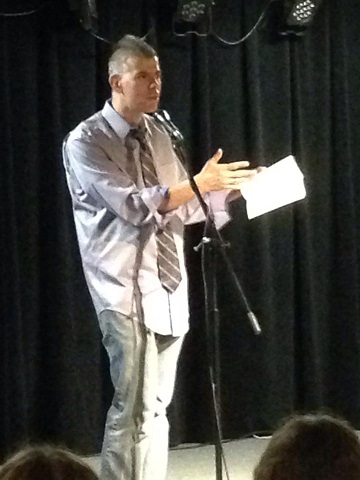 What’s your connection to the Midwest, and how has the region influenced your writing?
I was born in Jackson, Michigan and have lived in Michigan my entire adult life. My early childhood mythology is full of Midwestern places and characters – donut shops, an uncle’s farm, the house my grandfather built, lakes and boats, snow so deep I could dig a tunnel through it. But I spent eight years of my childhood living in the South before returning to the Midwest in middle school, which has done weird things to my memory. I can’t recall the name or face of a single teacher before high school. I remember my first day of class in Ohio in eighth grade, being asked by my teacher to spell my last name, and the class’s laughter at my Tennessee accent – Bay, ay, ay, ayl. I had to work at speaking like a midwesterner to avoid humiliation. As a result, I think I feel both rooted and rootless in the Midwest, and it’s hard to pinpoint exactly how that has influenced my writing. Midwestern motifs emerge in ways both settled and strange.

What do you think is the most compelling aspect of the Midwest?
The seasonal change here is dynamic and striking, and really does redirect both the pace and the mood of life. When snow hits each winter, it means thicker shoes and coats and a riskier drive to work, but there’s also an associative magic that settles over me (and probably everyone). You see and feel differently, all the color and light and sensation changes. And then when the snow melts each spring, a wholly different magic settles over you. You live, physically and mentally, in a state of continual flux.

How do your experiences or memories of specific places—such as where you grew up, or a place you’ve visited that you can’t get out of your head—play a role in your writing?
I get bored with trying to tell the straight story about a place. In a class I’m teaching, we’ve discussed Coleridge’s line about the “film of familiarity” that keeps us from seeing the wonders of the world before our eyes. One of my favorite poems about a place is “The Enormous Parachute” by Kevin Prufer, in which a cityscape comes brilliantly to life as a result of this absurd impossibility of a miles-wide parachute descending over it. In the one poem where I’ve deliberately set out to explore the small town my parents come from, I had to put an okapi in the back yard to get the poem going. As both a reader and writer, I need a twist of invention to transform a place before I’m convinced I’ve experienced it.

Discuss your writing process — inspirations, ideal environments, how you deal with writer’s block.
I write in swarms – four poems in a weekend, or thirty in a month, with dormant periods in between. The swarms are most often planned rather than spontaneous. My schedule isn’t conducive to everyday writing, so I work to build in focused work periods here and there. Inspirations grow from experience and observation of course, but also from games; I love prompts and seek them out or design them for myself. I find it hard to turn down a challenge, so if someone dares me to write a double sestina, or a poem that acts as a fractal, or a poem with a terrible title like “Pattern of Love,” I’ll jump at the chance. This approach helps cure writer’s block – you’re just playing a game to find out where it leads. And if you’re writing a swarm of thirty poems in thirty days, say, you don’t have to worry so much whether a particular poem is any good, because there’s a new one tomorrow, which quells a lot of anxiety.

How can you tell when a piece of writing is finished?
Honestly, I can’t. I know a poem is unfinished (or unstarted) when it fails to surprise me, when it lands on a false note, when the language feels flat. But when a poem gets to feeling pretty good, pretty lively, it gets harder to finish – you begin to feel that every change both adds and subtracts, and mourn the subtractions even when they make the poem better on balance. Publishing helps finish the poem by taking it out of my hands.

Who is your favorite author (fiction writer or poet), and what draws you to their work?
I tend to think of favorite poems and stories rather than favorite poets or storytellers. But the poets now whose books I crave the instant they drop would be Ross Gay and Alice Fulton. They take different routes to get there, but both aim for a depth of inventive compassion in their work that gives me hope for literature and life.

What’s next for you?
I’m looking for opportunities to travel and read from my first book, Wait ‘Til You Have Real Problems, which came out in November. I’m excited to read in Chicago this March and to attend AWP for the first time this April. And meanwhile I’m shopping a chapbook about an octopus with marital trouble and pulling together poems for my next manuscript.

Where can we find more information about you?
I have a terribly rudimentary website (scottbeal.com). If you know anyone who’d help me redesign it on a poet’s budget, I’d love to hear from them.