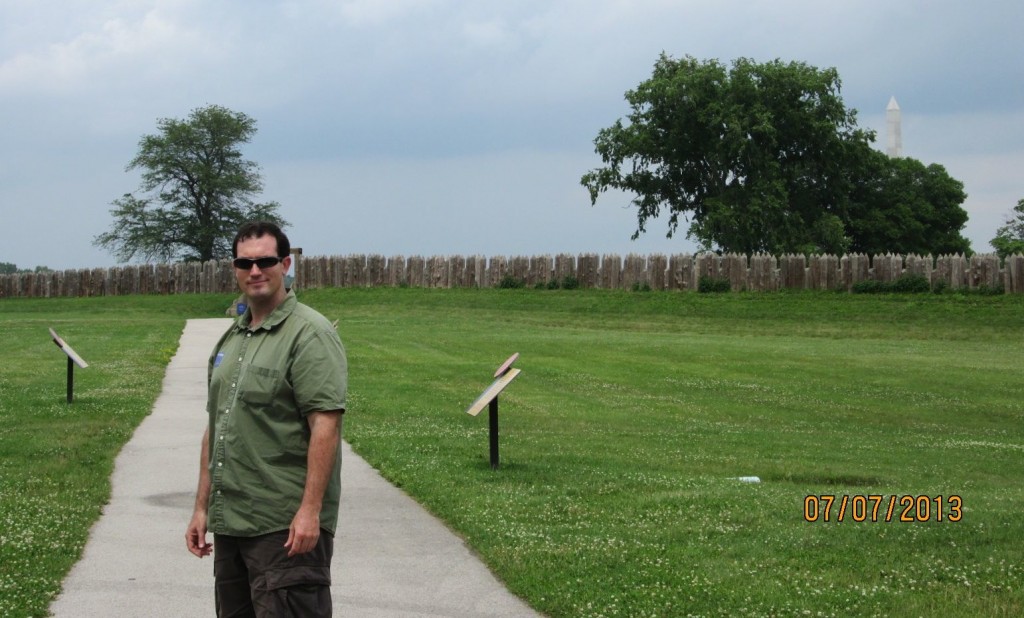 What’s your connection to the Midwest, and how has the region influenced your writing?
I worked for four years (2004-2008) as a Visiting Assistant Professor at Michigan State University in the Writing, Rhetoric, and American Cultures department. Also, Spring 2014 I completed my MFA in Fiction at Bowling Green State University. My brother recently moved to Wisconsin, and I’ll be visiting that neck-of-the-woods regularly. I reunited with some Midwestern friends while at the AWP conference in Minneapolis this year too.

In terms of specific Midwestern influences, definitely my writing teachers Lawrence Coates and Wendell Mayo who teach at Bowling Green, OH, as well as Earnest Hemingway’s “Nick Adams” stories set in Michigan. And who doesn’t listen to Prairie Home Companion sometimes? Chris Lamb’s Wry Harvest: An Anthology of Midwestern Humor probably had some influence too.

More specifically to the work in the July issue, there’s a biographical aspect to the story, “What the Storm Brought.” One of my father’s cousins and her daughter actually did live in Belleville, OH, and a tornado struck that community May 10th, 1973. Although I refashioned my relatives into different personalities, as well as making up other characters and various features, the chaotic nature of that storm and the gist of the devastation happened as described. Also, when I lived in Michigan, I had the opportunity in May 2008 to tag along with some very experienced and strategic storm-chasers during a “High Risk” outbreak. As a consequence, I witnessed about ten tornadoes, most in Kansas but one particularly powerful one in Iowa (a different tornado from the same storm that produced the devastating Parkersburg tornado). Those experiences observing the dynamics of an evolving atmosphere reaching its supercellular potential to produce tornadoes also helped with some of the writing of this story. I also visited Belleville, OH to contemplate the layout of the town, the look of the buildings, the marks of the past.

Aside from those Midwestern influences on “What the Storm Brought” for this issue, I learned to downhill ski while living in Michigan, and I’ve enjoyed immersing myself in the wilder places of Michigan, the Upper Peninsula in particular. I got to witness the mysterious Paulding Light, and I interviewed some people about their legends about it. I wrote a story about Slender Man set amid some of the mining country up there. I’ve written about the Porcupine Mountains a bit too, particularly some bear-encounters. Visiting Isle Royale was a memorable experience in Lake Michigan, and that’s a setting I’d like to include one of these days.

What do you think is the most compelling aspect of the Midwest?
Overall, the way that people learn to define themselves in relation to the role of their environment. There’s a strong sense of place, but it varies quite a bit. There’s a lot of nuance in terms of how people interact with their environment and the force the surroundings exert, whether the weather or edifices of the rust belt. The landscape of prairies, hills, woods, great lakes—it’s primal. And while not idealized in popular culture as much as the high mountain ranges and rocky and broad beaches of the west, or the palm trees and warm water beaches of the Atlantic, it’s a meaningful landscape. Partly because of the Midwest’s four seasons, life feels fuller than elsewhere. Less delusional? I think in places that don’t have the four seasons, something’s missed with human experience. Time and memory meet in the seasons. The very struggle to define the Midwest may be part of what constitutes its identity. I probably haven’t lived long enough in the Midwest to claim great insights. On the other hand, people may miss certain features when they’re perpetually settled in.

How do your experiences or memories of specific places—such as where you grew up, or a place you’ve visited that you can’t get out of your head—play a role in your writing?
I grew up in Sacramento, California, and I was lucky enough to have a backyard with trees and bushes, and fences to climb over without getting shot or mauled by a dog. So, I got attached to playing in certain maple and mulberry trees or constructing booby traps in the pyracantha bushes. I wrote a poem as an undergraduate about pretending to defeat a monster formed from the twisted branches in those pyracanthas. Also, a few years ago, I wrote a story about a malcontent pyromaniac who stews over things while traversing subway cave in Mt. Lassen National park in California. So, definitely the influence of place percolates. Sometimes a banal place can have power too. I’d relax after class in high school laying down on just the slightest rise of grassy earth near a cyclone fence. That spot on the lawn became a kind of idealized retreat in my mind. I fondly remember my beagles, valley jays and magpies, the drone of small planes, clover, honey bees, Monarch butterflies, the soft coolness of the green.

Discuss your writing process—inspirations, ideal environments, how you deal with writer’s block.
I’ll start with the last part of the question, though I probably don’t have anything revelatory to add that others haven’t mentioned before. Writer’s block afflicts different people for different reasons, for some it’s anxiety, for others it’s the reality of having a lot of things on your plate, a lack of planning or perhaps perfectionism. I think for me it’s been all those things at times, but ultimately you have to just work, and I’m willing to write bloated and messy drafts and kick the inner critic down the road a bit. It can be intimidating because as I see the words running along into pages, I know many of them I’ll have to sacrifice in cold blood, though others are even harder to deal with because they have some value, but they’ll have to be carefully considered and revised. Perhaps they might have to travel to a different part of a story or even another story. I struggle each day with being productive, and I often come up short, but I also remind myself of what I heard George Saunders say about a day’s revision when he visited Toledo: “Even if you just add a comma, you’re doing great!” So, revision—as most all writers will say—is the key to moving forward. John Dufresne makes some great points in The Lie That Tells a Truth about consistent writing habits being the key to getting past any excuses of writer’s block. You can’t wait for the muses to grant inspiration or to discover ideal writers’ refuges deep in the woods or Paris.

That said, I try to give myself some variety in terms of hopping around coffee shops, writing at different times of day, and approaching a narrative from various angles. I used to always write a story from start-to-finish. These days, I’ll migrate towards what is most compelling. There’s a kind of procrastination in that I suppose, but also going where the energy manifests can lead to interesting results.

A basic trick, if you want to call it that, is just making a few notes to yourself before closing up your writing shop for the day or night. That way you can review the notes the next day and hopefully pick up where you left off, or at least have some direction to follow. But if it’s a digression that spurs action, go ahead and chase down that path. Even if it turns out to be some will-o-the-wisp. Also, if you’re settling in to write at home, go ahead and turn off the phone ringer.

How can you tell when a piece of writing is finished?
I’m not sure I really can. I know when I feel that I’ve done everything I can do with a piece of writing given a particular moment in time, and even after “sitting on it,” I might not find anymore to say; however, after the passage of some years, I’ve returned to older stories I thought were finished, and I’ve discovered new ways of improving those stories. Sometimes it takes sharing the stories with others to help realize what’s not finished or could be improved. That was certainly the case in BGSU’s MFA program, and this particular story, which I first wrote a draft of several years ago, benefitted very much from the input I received.

In general, pieces feel finished when I don’t find myself as a writer having more to add or alter or as a reader getting hung up on any particular phrasing. The flow of the story should proceed almost inevitably, and the opening and closing work to unify the focus of the narrative. Ultimately, the story should separate its tie to me and exist as a discrete entity. It can float and travel.

Who is your favorite author (fiction writer or poet), and what draws you to their work?
This question gets harder for me the older I get. I tried contemplating if I were on a desert island what book I’d want, but then I thought that practically that book would have to be How to Survive on a Desert Island and Get the Hell Back to Civilization. So, let’s go with Fyodor Dostoyevsky. Somehow those long novels compel one to read through them in a blaze of lightning. Depth of thought, compelling characters, plot momentum, crackling energy with diction and sentence structure. On the other hand, there’s other Russians, I could have picked: there’s something uproariously captivating about Gogol, whose narrative voice just throttles you. Tolstoy however, feels a bit more like the persistent lapping of waves on the beach of that desert island, though artful revelation of character, and a grappling with realistic feelings, particularly ambivalence. The power of nature at work, but without as much lightning. In terms of narrative investment and engaging voice, I always resonated a lot with Emily Brontë’s Wuthering Heights, J. D. Salinger’s Catcher in the Rye, and Albert Camus’s The Stranger. But now in this answer, I’m retreating to the impressions of my teenage years. Thomas Ligotti’s creative and bleak horror struck a chord in recent years. In another year I might think differently about some of these answers.

What’s next for you?
I’m currently working on producing a decent draft of a novel I began in the MFA program at BGSU, revising and submitting short stories, and finishing revisions of an article about ghost lore in St. Augustine Florida. Also, I’ll be doing more reading about the use of fairyland in horror fiction. I’ll be presenting at a panel in Long Beach, California at the American Folklore Conference. I’m beginning my second year teaching at Texas A&M University this Fall. Very excited to be teaching some creative writing courses.

Where can we find more information about you?
Check out my website: jasonmarcharris.com Feel free to send an email too about any questions whatsoever and add me on Facebook. Maybe telepathy if you’re especially good at it? Just don’t believe any lies the voices may tell you. But be sure to write down the best ones.