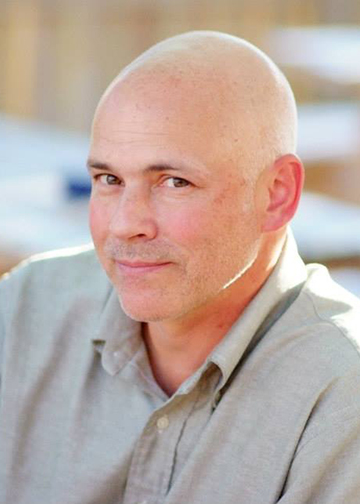 What’s your connection to the Midwest, and how has the region influenced your writing?
I was born and raised in Waterloo, Iowa, and have lived here much of my adult life. I seldom think about my writing as being specifically about place, since my immediate concerns have more typically to do with character, but perhaps that’s just the point: rural Middle America is, to me, the kind of non-place one takes for granted, where people seem larger and more fully dimensional against the surrounding landscape. I like to think that we flatlanders tend to be attuned to both geographic and interpersonal subtleties.

What do you think is the most compelling aspect of the Midwest?
‘Compelling’ is a funny choice of word, considering the above, but upon reflection, it’s exactly the right one. What’s compelling about my Midwest— I’m not talking about Chicago here—is that we tend to consider it not as a destination, but a point of departure. Young Midwesterners think of their home territory as a place to outgrow, to get away from. That’s compulsion.

How do your experiences or memories of specific places—such as where you grew up, or a place you’ve visited that you can’t get out of your head—play a role in your writing?
Surroundings and memories are a writer’s raw material, but I’m certainly not digging into that stuff in any Proustian sense. When I was a boy we used to go on family outings to a place called Split Rock, in Chickasaw County, where the defining features were a little human-made lake and a big boulder, about the size of a Volkswagen bus, which had been deposited by some glacier and cloven in two by some monstrous geological force. You could walk between the halves of it. Now, if I were to write a story using Split Rock as a setting (and now that I think of it, I just might), I’d be strongly tempted to utilize that boulder in some metaphoric sense, like a couple breaking up. That’s the role that place and memory tend to take in my writing: the arbitrary assignation of narrative meaning, more assemblage than reportage.

Discuss your writing process—inspirations, ideal environments, how you deal with writer’s block.
Ideally, it’s 4:30 in the morning, just as the birds begin to chirp, and I feel utterly alone. I’m pacing around and muttering to myself, happy that nobody is awake or around to see me acting so crazy. Writer’s block is my natural condition, the rule rather than the exception. I have to work myself into a state that allows the voices to come out.

How can you tell when a piece of writing is finished?
I edit as I proceed, setting down a paragraph or even just a sentence, then re-reading and tweaking the whole thing to make sure the tone and the narrative add up to that moment before I can move on. It’s a laborious process—a method I’m trying to change—but it does mean that I get to enjoy that ‘ta-da!’ moment when I arrive at what I feel to be the plot-line’s stopping point.

Who is your favorite author (fiction writer or poet), and what draws you to their work?
I’ve never been accused of overthinking it: favorite team, Yankees; favorite voice, Aretha; favorite movie, Oz; favorite building, Taj Mahal. So my favorite author is the guy who wrote this: “Men must endure their going hence, even as their coming hither. Ripeness is all.” What draws me inevitably back to Shakespeare is, of course, the great pleasure I derive from reading him, the engagement with something timeless, with a voice that proceeds not just from some authorial sensibility, but from humanity. Among contemporaries, I admire Michael Chabon, Nicholson Baker, Alice Munro. My favorite piece in the new MG is “Billiards” by Justin Carmickle—really great, open-hearted, democratic writing.

What’s next for you?
I just wrapped up my MA at Northern Iowa, and have a few months now to buff my CV while applying for PhD programs. Meanwhile, I’m working on writing that utilizes some of the conventions of the yarn or the folktale—trying to tap into a more Shakespearian mode, not to overstate it.

Where can we find more information about you?
I’m easily friended on Facebook, and I tweet haphazardly @brnpls. There’s a narrative poem I’m rather proud of here: http://wlajournal.com/wlaarchive/26/Pals.pdf.