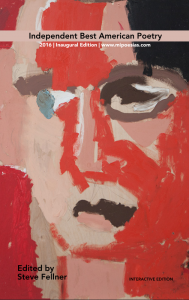 Congratulations to Grady Chambers, whose poem “Another Beauty I Remember” was recently featured in the 2016 edition of Independent Best American Poetry.

The collection was edited by Steve Fellner, whose second book of poems The Weary World Rejoices was published last year. His first book of poems Blind Date with Cavafy won the Thom Gunn Gay Male Poetry Award. His memoir, All Screwed Up, focuses on his relationship with his ex-trampoline champion mother.