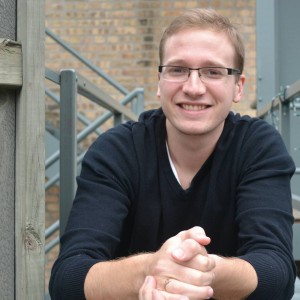 RS Deeren’s story “There But Not Really There” appears in Midwestern Gothic Issue 20, out now.

It’s hard to talk about myself without talking about who and where I came from. My parents were from Downriver Detroit and my grandparents came by way of Ohio and Tennessee. I was born and raised in Caro, a small town in the Thumb Region of Michigan, a three county peninsula jutting out from the Lower Peninsula into Lake Huron. I went to Saginaw Valley State University and now I’m a graduate student at Columbia College Chicago. So I guess you could say that I’m thoroughly Midwest. The Thumb Region has always fascinated me, it’s a geographic dead-end fixated onto another geographic dead-end. I mean, to come up into Michigan, and the Thumb, you’ve got to have a very specific reason because, before the Mackinaw Bridge, you’d just have to go right back out the way you came when you left. I’m at a point in my life where I see the Thumb as a great place, a perfect place, to come from and also the place to go to when a life has slowed down. I want that idea to come through in my writing: generations who have put their backs to the water, keeping the rest of the world right where they can see it, where they can keep it an arm’s length away. There’s a kind of tragic safety in that which keeps me writing.

The Midwest is always going through an identity crisis and I love that. Where I come from, there is a history of industrial life butting up to and mixing with farm life, all working class and now, with the Big Three not so big anymore, a lot of working poor, service sector jobs. Detroit isn’t so much Motown anymore but I’ve heard people calling it a potential Silicon Valley of the Midwest. I can’t really speak to that other than saying it’s something new to chew on. Now that I’m in Chicago, I’m steeped in shifting identity: a blue collar/international/city-of-parks kind of place. Then there is Madison and Minneapolis, seems like everyone wants to be in those places nowadays; traditionally working class cities with booming college appeal now. With the price of college, I can only imagine what these cities will look like in fifty years. Pittsburgh, and really all of western Pennsylvania went through this, seems like the trend is moving westward with the generations. Really, if you want to write on the human condition, the Midwest is the only place to be.

Everything I write comes from memories, I just have to change everything about them before I put them on the page. There’s a concrete bridge on the road that I grew up on, spans the Cass River, small thing, unassuming. Drove over it every single day as a kid. Used to take a canoe on the river and fish under it with my family. The thing is covered in graffiti, hearts and curse words and names. I lived next to that bridge for nineteen years and never once walked under it. It wasn’t until a year or so ago when I came home for a visit that I decided to check it out. There wasn’t much, beer bottles and an old tire. But up on the, well I guess you’d call it the ceiling of the bridge, was the name of an old English teacher I had in high school and a few derogatory terms in regards to their ability as a teacher. Later, I wrote and published a short story that took place under that bridge about what is seen and unseen in a life. That’s what I go for in my writing, backroads graffiti and people who are living, active, but trapped and mostly unseen by outsiders.

I don’t sit down to write until I’ve spent a good week or two spinning a line in my mind. Something like, “I changed my name to Jamaica right after my dad died.” Something that makes me ask myself, “Why? Why do this or that or the other?” I have that first line going and as I find answers for the why’s, I start taking notes. Then once I start losing track of the idea, I sit down and write it all out before I lose it. Production via fear, I guess. Or maybe just adrenaline. The inspirations usually come from people I’ve met, the things they say, I think you’ve always got to be careful around writers, they’ll try to immortalize you.

I write alone with Jackson Browne or Bruce Springsteen playing on loop. As I write this, I’m at my desk listening to “Lost in the Flood.” I’m not disciplined enough to write in public, I’m a people-watcher.

As for writer’s block, I have recently found that once I have a draft typed up and it’s still lacking, it’s always “still lacking,” I print off the draft then copy it longhand in a journal. I get maybe three paragraphs into this and I’ll already have something new to work with. I also keep all my notes and orphaned stories that never got going. I started my first novel this summer and I’ve found that switching back from typed to longhand has helped me create more avenues.

A piece is never finished. I think when you write realism, you’re constantly mining human life and finding new ways to tell the same three stories: love/hate, life/death, identity. Even with “There but not Really There” I still think there are things that I could have done differently. That’s writing, though, a failure at perfection, that’s life, it’s great. As for a draft? A draft is done when I get this feeling in the back of my neck, it’s almost like a kick, that says, “Yea, this is it. Yea, good for you.” Then the inner critic brings you back to reality when you start revisions.

There’s a professor who I still echo when I’m asked a question like this: That’s an unfair question, c’mon.

Boy, let’s see… I read As I Lay Dying when I was eighteen and I asked myself, “Wait… you can write stories like this?” Whenever I read Toni Morrison, I can’t help but think that her way is the only way to write character. Once I got to college, it was Donald Ray Pollock and Chuck Palahniuk, one was for myself, one was to impress this girl I once knew, both helped me write voice and refocused my writing’s point of view. A fellow MFA student turned me on to Bruce Machart. I recently met Bonnie Jo Campbell and we talked about Stanley Aladdin thermoses, the big green ones that scream, “Foreman called, I gotta go to work!” That’s the kind of writing that draws me in, Stanley Aladdin stories, doesn’t much matter who wrote it.

I just came off a very rewarding summer that ended with winning the Luminarts Cultural Foundation’s Creative Writing Fellowship and they are throwing a party in a couple weeks for that at the Union League Club in Chicago, so in the short run, I’m shopping for a suit for that. I host a writing workshop every Sunday where a few fellow writers and myself share a few oat sodas and work we’re trying to get out to lit mags. I’d like to keep that kind of writing community going. I’m plowing through the final third of my short story collection and the novel has been picking up steam. Nothing is set, though. I just put pen to paper, that’s worked for me so far.

Online at rsdeeren.wix.com/written (one day I’ll own my own domain, one day) and on Twitter @RSDeeren