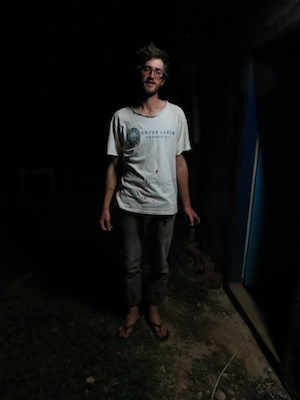 Most of my connections to the Midwest are vicarious, friends who grew up there or have family there. My personal experience is limited. I spent half a summer going to hockey camp outside of Brainerd, Minnesota when I was in high school. A couple of weeks visiting a friend in Iowa City. I have had a lot of friends who are either from or have ties to Iowa.

From an outsider’s perspective, the Midwest seems like a very “American” part of America. Many Midwestern places are also fixtures of American identity. The Great Plains. The Grain Belt. The Rust Belt. The Great Lakes. The Mississippi River. I think you could set a lot of different stories in the Midwest and find a way to make it feel real and have most readers connect with it on a personal level. A lot of my characters have Midwestern ties.

The land and the people and how they interact with one another. I am fascinated with the plains. Their stark beauty. Also farming communities. The ones where people are farming the same land their grandparents farmed, or great grandparents even. I come from a small town in Colorado where most people are transplants. Of the 25 people I graduated high school with, I can only think of one or two whose parents were born there. I think a person’s sense of place and belonging in an area containing generations of shared history is different than for someone who is the first generation of a family to grow up somewhere. There is something about that continuity of tradition I find compelling, how some things change drastically while others stay the same from generation to generation.

Everything in a piece of fiction has to be believable. How a character interacts with their surroundings is as important as the surroundings themselves. The same goes for how characters interact with each other or react to events, I have to believe it. A lot of the places in my writing are fictionalized versions of real places. A lot of the buildings are real buildings.

When I started writing it was easier to pull experiences and places from my own life than it was to fabricate situations that felt emotionally true. None of my fiction is autobiographical, though there are many occurrences in my stories that actually happened. I probably put a little bit of myself into many of my characters, though in a way that is far enough removed that it no longer resembles real life.

The more I write, the less I rely on concrete experiences as sources of inspiration. I can put myself in a character’s shoes and answer the questions, ‘How would this character react in this situation? How would they feel? What would they do, and why?”, without having to have had that experience myself. Still, many of my stories are born out of something personal, an idea, a question, concept, topic, or emotion I want to explore.

Routine is very important. My favorite time to write is first thing in the morning. I like to get up a couple of hours before I have to leave for work so I have time to write without feeling rushed. If I am not too tired, I will also write in the evenings. By making it something that I do every day, it comes easier. If I miss a couple of days, that first day back usually takes me a little longer to get into the groove.

That’s the closest I’ve come to writer’s block: trouble getting started. I just have to begin, even if it feels forced at first. I usually read aloud something that I like stylistically before I write. Helps me get in the mindset of thinking about language and sentence structure, etc. Currently it is James Salter. In the past it has been Kent Haruf, Marilynne Robinson, Cormac McCarthy, the short stories of William Faulkner. If I am stuck on something, writing about what I am writing helps. Kind of like an outline or a synopsis. Not as an organizational tool, but a way to help me form thoughts.

I usually let an idea for a story formulate for a long time before I start writing. Most of my stories have been bouncing around in my head for years. This is more a result of time management than adherence to a process. I’m a pretty slow writer. Writing stories is like checking things off a list. When I finish a project it is more a matter of picking the idea that is the most formed or feels the most imminent than it is brainstorming what to do next. I probably have enough floating around my head to keep me busy for the foreseeable future.

As for environment, I like it to be quiet, I like to be alone. I read aloud as I write and edit. I don’t like other people to be around while I do this. Makes me feel like a crazy person. Lately I’ve been doing first drafts by hand, then moving to a typewriter, and putting it on a computer only when I am done and ready to make it a ‘final’ draft. This happens somewhere between the third and the fifth time of working through a piece. I edit a lot as I write and rewrite and I like to have it physically in front of me to mark on as I go, to write in margins, cross something out but still be able to see what it said without the permanence of deleting.

As I edit, reading aloud over and over, I find those places where the rhythm or cadence of a piece feels broken, where some transition isn’t working. Discrepancies in plot/setting/character. Once I can read through a piece and everything feels right where it needs to be, that is my goal. I could do that forever and always find something to change around, though eventually I reach a point where the changes I am making are mostly superficial. That’s when it is time to get another perspective or let it ferment for a while and come back to it in a few days or weeks or months.

For Haruf, the way I feel after reading his books, as if I’ve lived in Holt, Colorado for my entire life and known his characters for as long as I can remember.

For Robinson, the way she makes the small, everyday things seem almost holy in their importance, and the bigger things, such as God or mortality, seem like they ought to be simple. And all in a very elegant, poetic prose that might come off as contrived in the hands of less skilled writers.

And this is continually changing. There are a number of authors that I am just now delving into. If I can finish reading something and want to immediately read it again and then seek out everything that author has written, then they are probably going to be added to my list of favorites. Haruf’s Plainsong and Robinson’s Housekeeping did that to me.

I’m working on an extension of “Little Man” that will be of novella or short novel length when it is finished, hopefully sometime this summer. Also a couple of shorter pieces when I need a break from the longer one.

Come to Colorado. You can find out anything you want to know over beer or a cup of coffee.