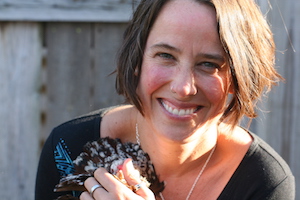 I grew up on a farm in Middle Illinois, but ultimately, the Midwest is a place I keep coming back to. I came to Kalamazoo, Michigan in 2008 to embark on a PhD. That’s long finished, but I’m still here. Influence-wise, well… I never thought I’d utilize landscape in my poems to the extent that it would be a focus, or lead me to thinking or writing about environmental non-action. The region has also, of course, influenced the speakers and other personas in my poetry.

I had a friend who’d always lived on the East Coast. He was beside himself with the cornfields that went on for miles. This makes the sunsets remarkable. Between these and the Great Lakes, it’s a tough choice.

The rural Midwest (farming) probably influences my work the most. I think that as poets, we all write about similar issues and experiences. It’s the landscape that distinguishes one from another. Most of my poems, no matter what the context, begin with a singular, textured, image. These images depend on the atmosphere around them. For instance, think of what humidity does to your hair… Or roosters.

I always read before I write. I always start with pencil and paper. Ideal environments? Out of the house. People get so weirded out about writer’s block. In all honesty, I try not to think about it except in saying that it’s part of the poeming process as much as anything.

I wish I were one of those writers who could say I believe poems get finished. It’s a letting go process for sure. Ultimately, the poem’s got to feel unpredictable in the end and sound like something might overtake me at any moment.

I have a big crush on Natalie Diaz right now. Her work is honest and the way she uses syntax to create music is fascinating to me. Honesty is one of the most difficult things to come by these days — music perhaps a little easier, but both? And the em dash? How does she do that?

I’m not very good about the “more information” piece. I Facebook a little, but if anyone wants to build me a website, I’d probably accept.