During the summer of 2018 we continued our annual Flash Fiction Contest series, inviting authors to respond to three different picture prompts. You can read more about the series here. Round 1 submissions responded to our photo prompt with the following criteria: here.

He lives at the edge of the development, on the other side of the creek. You can see his property between a gap in the trees. Overgrown weeds and thistles, and everywhere spiky metal forms: discarded lawnmowers; a rusting tractor; curved blades of iron or steel, like a row of scythes. They say he used one on Davey Jenkins the night he disappeared. Dressed up like the Grim Reaper. This is whispered in the slatted spaces of my treehouse, the one spot high enough to spy into Uncle Soot’s yard. We can just make out the burned husk of his house in the dusky twilight.

Davey’s bike was found half in the creek, they say, its frame a mangled wreck.

Uncle Soot would fix Davey’s bike, not ruin it, I tell them.

They stare at me, rabbit-eyed, and I show them the things I’d found at the edge of the creek, each a secret offering. The clockwork rabbit that hops when you wind it; the wolf that stalks it, its jaws made from an ancient grass whip; the brass-beaked crow that talks, its black eyes watching us appraisingly.

Uncle Soot made them, I say. Uncle Soot can fix anything.

The crow croaks, and they scramble down the ladder, tell my parents they want to go home, that they’re afraid of Uncle Soot. My parents shoot me a look and send me to my room and yell, No more ghost stories. I open my window and listen to the creek murmur and the flapping of mechanical wings.

You believe in ghosts? Uncle Soot asks. He’s sitting at the edge of his yard, filing a long strip of metal that glints even in the clouded day. His hands are blackened, covered in grease, but they never slip.

I’m in the creek, my bare-feet aching from its iciness.

It’s funny; people think you can’t see ghosts, Uncle Soot continues, that they’re invisible. He holds the metal strip up to his eye, tilting it this way and that in the light. He smiles a sooty grin, says, You’ll catch cold in the water. Come up here where it’s warm.

This is the week after they found Davey shivering beneath the bridge, his face and arms covered in black muck, like he’d been dipped in motor oil. He wouldn’t talk about it after school, not even after we sniffed him and smelled the reek of iron and rust. He rode a new bike, crimson-streaked with copper handlebars. He wouldn’t tell us where he got it, wouldn’t talk about the jagged scars sewn along his arms and legs.

Uncle Soot curls the metal strip about a rod. Curls it tighter and tighter until it’s the size of my fist. I take a step closer until I’m only an arms-length away. I ask what it’s for.

Not what, but who, he says, and the metal heart pulses in his hand, ready to come alive. 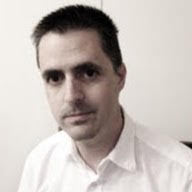 Joshua Jones lives in Maryland where he works as an animator. His writing has appeared or is forthcoming in CRAFT, The Cincinnati Review, Pidgeonholes, Split Lip Magazine, Monkeybicycle, SmokeLong Quarterly, Necessary Fiction, and elsewhere. Find him on Twitter @jnjoneswriter.