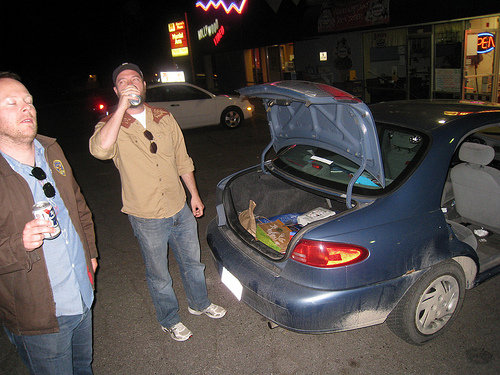 How long have you been writing?
Since ’01 or ’02, I think it was, but I think I started taking it much more seriously a few years after that.

What’s your connection to the Midwest?
I think of myself as a west coast guy, but I moved to Ann Arbor for my lady, and then went to grad school in Champaign, IL, and have now been in some combo of MI and IL for like eight years, which is probably too long to still cling to claiming “outsiderness.”

How has the Midwest influenced your writing?
Well. I don’t write about place too much, I don’t think, but I do like to try to write about a “blankness,” a kind of flatness of landscape, both emotional and location, so lots of flat and nothing but miles and miles of corn has helped and probably influenced some of that.

Why do you believe there has never really been a regionalist push for Midwestern writing in the past like there has with the South or even the West Coast?
I think it has to do with that flatness again. There’s an absence terrain, which is of course a terrain in and of itself, but it doesn’t really lend to being pointed out. Things seem a little less exaggerated, which can then make it harder to push toward specification.

How do you feel about social media to promote your writing, and do you use it?
I don’t know. I’ve been caring about it all a little less and less, actually. I use facebook, a little, and I just started a tumblr for Hobart. I’m a little torn and conflicted about it all, actually. It’s a fine line between getting word out about yourself and overkill and annoying people, I think.

Favorite book?
I don’t really have any favorites. I just finished W.C. Heinz’s The Professional, which I liked quite a bit. I love recommending Chris Bachelder and Brian Evenson and Sam Lipsyte and Pat Somerville.

Favorite food?
Burritos and tacos. And bourbon. And bbq.

If you could have coffee (or tea or a beer) with any literary figure, alive or dead, who would it be?
I have no idea, really. Sorry to sound boring. I don’t really have a desire to meet or chat with any literary figures. I’d rather just read their books. I’d rather play basketball with them. Word is one can find some good literary basketball out in Washington. Trying to d up Sherman Alexie would be fun.

Where can we find more information about you?
I used to have a website for my book – http://www.howtopredicttheweather.com/ – but it’s not really kept up to date. Otherwise, my stories are out there, Google-able to varying degrees.