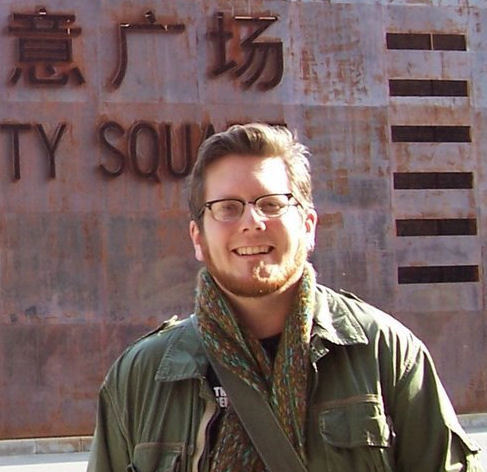 How long have you been writing?
I wrote my first short story after watching the silent, Lon Chaney version of The Phantom of the Opera at St. John’s cathedral in Spokane, Washington, when I was five years old. They showed it at midnight, on Halloween, complete with organ music and creepy sound effects. I had a really intense dream, after the movie, and when I woke up, I wrote it down in this red Hello Kitty diary I stole from my sister. What was with my parents, taking us to something that terrifying, that young? God bless you, mom and dad.

What’s your connection to the Midwest?
I moved to the Midwest from the Pacific Northwest for the first time when I was eighteen, after meeting a girl on the internet at a time when people did not meet people on the internet. That relationship went south, of course. Years later, living in Moscow, Idaho, working at an amazing bookstore called Bookpeople, I was trying to decide between going to graduate school in New York, or going to graduate school in Kansas. The owner of the bookstore, Bob Greene, a transplanted Brooklynite who’d moved to Idaho in the late seventies/early eighties, gave me some sound advice. He said: “Do you want to live with twelve other people in a studio apartment and work three jobs in order to pay rent, and write one poem a year, or do you want to move to Kansas and really work on your writing?” Bob was right. I moved to Kansas, and my future wife, a Topekan, was, by chance, the first human being I spoke to when I rolled into town. I’ve been here ever since, for over a decade, except for a stint in China. I have no family ties, or family history in the Midwest, but live here by choice, which is something many of my coastal friends and family are still confused by. It was the right choice, though. Kansas is a great place to write.

How has the Midwest influenced your writing?
I attended a lecture given by Larry Martin, a vertebrate paleontologist, who explained how the move of primate species from an arboreal habitat to the wide, open spaces of the African veldt, was one of the evolutionary causes of development in the human brain. The wide open spaces required primates to evolve and develop the capacity for abstract thought, because of the difficulty navigating terrain without visible landmarks. We like to think ourselves very advanced, we Homo sapiens, but I feel the open landscapes of Kansas, particularly the Flint Hills, affect my thinking, and my writing. The landscape here nudges you into grappling with ambiguity. In Kansas, there is the physical dimension of the wide, open spaces, but we also, almost reflexively, fill up those open spaces with thought. The physical, rural landscape of Kansas requires abstract thought to navigate, or make sense of it. Open space is the space of terror, as well as the frontier; the space of the sublime. If you don’t believe me, take a writer from New York and drop them into the middle of a wheat field in Western Kansas, say, around Garden City.

Why do you believe there has never really been a regionalist push for Midwestern writing in the past like there has with the South or even the West Coast?
I don’t have a good answer for this one. I’ve wondered this same thing, since my very first move to the Midwest. One thing I’ve noticed, being a transplant, is that many native Midwesterners, Kansans at least, have bought into the coastal rhetoric of the Midwest as “less than,” as secondary to other regions, artistically. Quite frankly, that’s bunk. Great art can come from anywhere, and everywhere. It’s easy to settle comfortably into your identity as an artist in Billyburg, or Seattle, where you can throw a rock and hit one of your peers, at one of the fifty nightly fiction readings or art openings. I’m an artist in the only state in the Union where the governor has abolished the state arts commission. That’s nothing to brag about, sure, but still, nobody’s coddled here, and if you do meet an artist who has been an artist for any length of time, that artist is serious about his/her work. They have to be!

Aw, hell, that’s a miserable answer. Let’s just start a Regionalist push right now. Everyone from a Midwestern state affiliated with any kind of writing program should meet up at AWP in Chicago, and we’ll all get tattoos. It’s Chicago! This is our year.

How do you feel about social media to promote your writing, and do you use it?
I blogged a lot more frequently while living in China, but I’m trying to get back into it. I’m lucky enough to be part of two really amazing arts communities, in Lawrence and Topeka, and most of the writers I know help to promote each other’s work using social media, and let each other know about readings, and events.

Favorite book?
What an insidious question! I am going to cop out, and answer with the best book I’ve read so far this month, which is See Jack, by Russell Edson.

If you could have coffee (or tea or a beer) with any literary figure, alive or dead, who would it be?
Max Ernst, when he was in Paris. He would pick good wine, and he had crazy friends. It would be a hoot. We would paint Monmartre chartreuse.