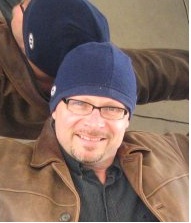 How long have you been writing?
I started writing in March 2009. I wrote a few messy, amateurish pieces and then somehow thought I was fit to participate in Cleveland State’s Imagination Writers’ Conference in July of 2009. I embarrassed myself, I think, but I came out of that experience headed in the right direction. Those five days were crucial to me. I’m not sure where I’d be right now if I hadn’t taken that opportunity.

What’s your connection to the Midwest?
Born and raised in Ohio, schooled in Indiana, then left the region for a while, eventually returning to the breeding grounds.

How has the Midwest influenced your writing?
I think that being a Midwesterner colors everything you do with an attitude of no-nonsense, call-it-ugly-if-it’s-ugly realism. You become a half-hearted cynic and a half-assed optimist and I’m comfortable with being both. I think about and talk about (and therefore write about) rusty cars and their rusted drivers and childhood dreams that don’t quite work out as planned, plus getting lost in seas of corn stalks in July and the homeless piling up in front of the Greyhound station and “perfect football weather”.

Why do you believe there has never really been a regionalist push for Midwestern writing in the past like there has with the South or even the West Coast?
I think there is a heartland regionalism that has been around for a while, and still is, but it exists under the radar because we (collectively) tend not to draw too much attention to ourselves and our labeling. It’s so Midwest of us, to understate things. So what do I mean by heartland regionalism? I’m thinking about writers like Dan Chaon, Bonnie Jo Campbell, Ander Monson, Roxane Gay, John McNally, Matt Bell, Mike Czyzniejewski. That’s an arbitrary and eclectic sampling, but I think that there is an undercurrent of unflinching honesty that binds them all together as Midwestern writers. They all have dirt under their fingernails, and it doesn’t bother them in the least. In fact, they’re proud of it. That, plus a wicked sense of humor. Being Midwestern means learning to laugh at yourself, not with yourself.

How do you feel about social media to promote your writing, and do you use it?
For me, it’s a necessity and I use it constantly. Since I’m not an MFA, not a literary professional and not even in a writers’ group, I would truly be an island with my internet connectivity. It’s just me and my full-time career and my part-time writing and my wireless-enabled laptop.

Favorite book?
I can narrow it down to three: Pastoralia by Saunders, Garcia Marquez’s One Hundred Years of Solitude, and Italo Calvino’s If on a Winter’s Night a Traveler.

Favorite food?
I’d say the entire category of seafood. And I define seafood very broadly. For example, accoutrements like beer and pie both qualify.

If you could have coffee (or tea or a beer) with any literary figure, alive or dead, who would it be?
Here’s my plan, although it’s cheating the question a bit. First, morning tea with the ladies: Ayn Rand, Aimee Bender and Alice Munro. Then some afternoon red wine and wild imagination with Garcia Marquez, Borges, Murakami and Calvino, and a squad of interpreters (if Neruda crashed our gathering, I’d let him stay). At night, time enough for a few beers and laughs with George Saunders and David Foster Wallace.

Where can we find more information about you?
I’m planning on starting a blog site this year to collect my links in one place, but for now, a Google search will find much of my stuff. Here are a few selections:
http://elimae.com/2011/02/Jardin.html
http://matterpress.com/journal/category/joe-kapitan/
http://emprisereview.com/2011/uncategorized/a-late-winters-conversation/