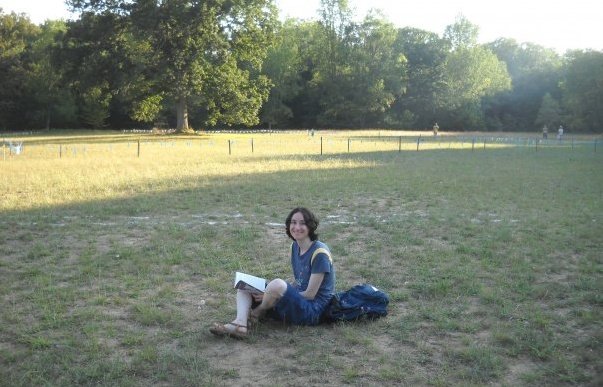 How long have you been writing?
I think I came out of the womb holding a pen. I always wrote stories and poems and kept diaries as a kid, and then I got really serious about writing in high school. I had a really awesome teacher who took the time to read my work and conference with me even though I was writing these really endless story series that were probably kind-of awful. I wrote some in college, but really got away from it for a number of years. I’m incredibly grateful to have
recovered that part of my identity and have been writing seriously again for the past four or so years. When I was trying to figure out a title for a story, I came across an ancient Egyptian quote that begins, “Call yourself back then to yourself,” and that rings very true to me. It’s been my mantra of late, and is the working title of my MFA thesis. But that title might be too
many words. Now I fear I’ve gotten away from the original question.

What’s your connection to the Midwest?
I’ve lived in the Midwest my entire life. I grew up in Cleveland and attended Beloit College in Wisconsin. After college, I lived in Chicago for nine years, and I live part-time in Kalamazoo, Michigan. Because we can’t seem to stop living in the Midwest, my husband and I are moving to Milwaukee this summer.

How has the Midwest influenced your writing?
I find the seasons and the weather very evocative. The endless and endlessly gray skies of Cleveland correspond to a particular emotional state for me. I feel similarly about the dark, bitter winters in Chicago. I’ve also gotten a lot of material both from growing up in the suburbs and from camping in Michigan. I’m working on my MFA at Western Michigan and
have gotten really excellent mentorship from the faculty here.

Why do you believe there has never really been a regionalist push for Midwestern writing in the past like there has with the South or even the West Coast?
I think people in the Midwest are fairly modest. No one really brags about living in the Midwest. Maybe the Great Lakes just seem less glamorous than oceans. I also wonder if it has something to do with the major publishing houses being in New York and movies being produced in L.A. Even though plenty of writing happens outside of those locations, people may not consider that because of where the final products are packaged. But, if no one is talking about living and writing in the Midwest, then it will go unnoticed. It shouldn’t, though, because we’re the Third Coast. I’m grateful that Midwestern Gothic is giving Midwestern
writers a platform!

If you could have coffee (or tea or a beer) with any literary figure, alive or dead, who would it be?
Anne Lamott. She just seems so funny and genuine and has this great mixture of reverence and irreverence.

Where can we find more information about you?
I have a piece of flash fiction coming out in NANO Fiction, and there’s a bit about me on Wit Rabbit’s website, which is a great reading series in Chicago. I’m also the nonfiction editor for Third Coast.