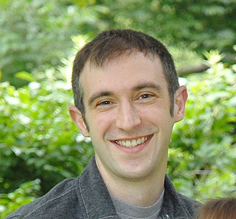 How long have you been writing?
Probably about seven years that I’ve been serious about it.

What’s your connection to the Midwest?
I grew up in Lansing, Michigan, and lived there until I finished my bachelor’s degree. From there I moved to Kalamazoo, Michigan, where I’ve lived ever since.

How has the Midwest influenced your writing?
Occasionally I try to write a story or poem that doesn’t feature the Midwest in some significant way, but they never turn out well. I am fascinated by the landscape of the Midwest, whether it be rivers and woods, or streets and neighborhoods. And I love the speech patterns, too. There is a grittiness or starkness that is sometimes confused with being simple, but I think there are some great undertones that I try to draw out in my work.

Why do you believe there has never really been a regionalist push for Midwestern writing in the past like there has with the South or even the West Coast?
I’m not really sure, to be honest. I think that a number of Midwestern Gothic contributors have made excellent points on the subject. To those views, I guess I would add that the Midwest isn’t seen as a place with as much conflict, history, or culture as other parts of the country. Of course, I don’t agree with this viewpoint, but I do think that the culture of the West Coast and East Coast has been represented more, which sometimes is confused with being more valuable.

How do you feel about social media to promote your writing, and do you use it?
I think social media can be a great tool to promote writing, as long as it’s done tastefully and in moderation. That said, I do feel more comfortable when someone else, like my wife or my sister, promotes my writing rather than when I do it myself. I’m working on that, though.

If you could have coffee (or tea or a beer) with any literary figure, alive or dead, who would it be?
For dead authors, I’d have to say Richard Yates or John Gardner, and David Rhodes would be my first choice among living authors.

Where can we find more information about you?
www.johnabbottauthor.com
www.everydayotherthings.com