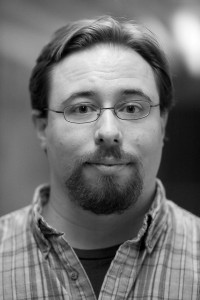 How long have you been writing?
I’ve been writing most of my life. My mother was a reporter for a local paper, and she’d take us along on assignments sometimes. I can remember carrying her big tape recorder around my neck, following her to a fire. My mother encouraged my sister and I to write. In terms of writing realistic poetry and prose, I’ve been serious at that task since around 1993. I think I first began blossoming as a writer around 1997, during my work on an MA in English at K-State.

What’s your connection to the Midwest?
I’ve lived in the Midwest all of my life, except for one semester spent at the U of Arkansas in Fayetteville. I was born in Merriam, KS, and grew up in Shawnee. For undergrad, I went to UMKC. For generations, my people have been Kansans. My father’s people had land where Wilson Lake is now. Volga Germans, Czechs, they settled in central Kansas.

How has the Midwest influenced your writing?
For some time now, I’ve considered Kansas and its people my subject. Of course, I write things about other places. I travel. But what I write and how I write it is rooted in the Midwest, in the mannerisms and meditative bent of Kansans. Also, a jazz musician at heart, Kansas City is also important to me.

Why do you believe there has never really been a regionalist push for Midwestern writing in the past like there has with the South or even the West Coast?
Folks like William Stafford and Robert Day seemed to have made that push, most specifically a push for fine, literary Kansas writing. That push continues with Thomas Fox Averill, Denise Low, Steven Hind, Jonathan Holden, Phil Heldrich, Elizabeth Dodd, Philip Kimball, Ruth Moritz, Brian Daldorph, Stephen Meats, and many others. More recently, it can be seen in the work of Matt Porubsky, Leah Sewell, Dennis Etzel Jr., Bill Sheldon, Dan Spees, Nedra Rogers, Stella Robbins, Tasha Haas, Caleb Ross, and a whole new lineage. Regional—and Kansas—journals also make this push: Cottonwood, Flint Hills Review, Blue Island Review. And, of course, Midwestern Gothic.

How do you feel about social media to promote your writing, and do you use it?
Social media seems to be the way things get done now. I post reading events on Facebook often. I have a webpage. If you can connect quickly and meaningfully, why not? However, I do still write quite a few paper letters each week. And I write a lot of poems, and plays, on paper.

Favorite book?
White Noise, a novel, by Don DeLillo. A funny novel, full of dark humor, in which a family flees an airborne toxic event. Also, the modern university is spoofed. Tell Me, poems, by Kim Addonizio. Some of my favorite poems, full of heart and intellect; they hit hard, no pulled punches. Tim Seibles, poems, Hurdy-Gurdy, has the best basketball poem on earth. Plus, Seibles knows how to masterfully write for the page and for the voice at once. Thomas Lux, New & Selected Poems. “Refrigerator, 1957,” full of voice and humor, and sadness, is one of my all-time favorites. Read it aloud.

Favorite food?
German chocolate cake. Or angel food cake. Either or both.

If you could have coffee (or tea or a beer) with any literary figure, alive or dead, who would it be?
Sam Shepard. We could talk about his plays, then maybe jam on drums after. I love his approach to dark humor. Plus, he does a nice number on the West and Midwest.

Where can we find more information about you?
www.kevinrabas.com