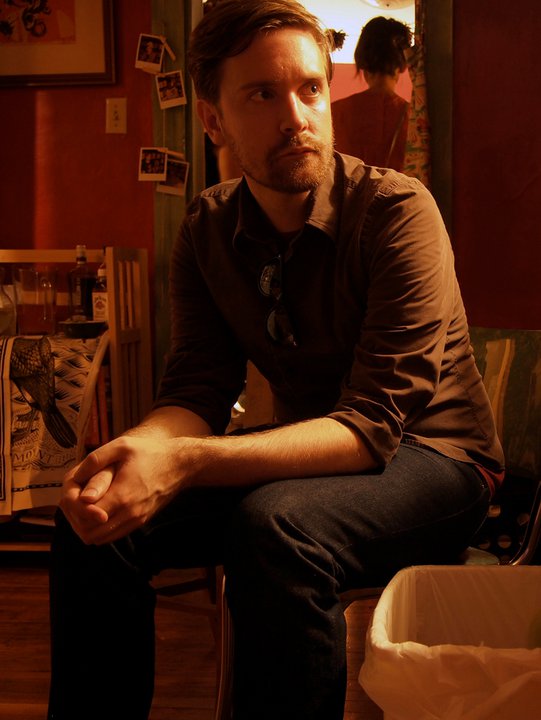 How long have you been writing?
I’ve been writing since childhood—after school, I would walk to where my mother worked, find an empty office with a typewriter, and churn out two-page horror stories (your classic blob-eats-town sort of stuff). When I was ten years old, I also wrote, illustrated, and bound a novella about dinosaurs coming through a crack in the ground, and it won an award. That was great encouragement. Eventually, I grew out of genre-centric writing, but it stoked the fire for me.

What’s your connection to the Midwest?
I was born in Omaha, and lived in Nebraska until I left at 22 for graduate school at the University of Alabama. After graduation, my then-girlfriend, now-wife and I returned to her hometown, Lawrence, Kansas. That’s our home base right now.

How has the Midwest influenced your writing?
It wasn’t until I moved that the Midwest started to permeate my writing. When I was young, thoughts of place weren’t always a factor—it was all plot-driven fiction, wordplay-fueled poetry. But I felt a mental pull back to Nebraska while in Alabama, and it altered my poetic concerns, simplified my voice, and narrowed and regularized the shapes of my pieces (Nebraska especially is dominated by gridwork, squares, stretches of road, and my poems often have that rigidity and expanse on the page). Also, my emotions became more reserved—I adopted a kind of calm. In college, my poems were full of sturm und drang and gymnastics. These day, there’s less of a tendency to be hot-blooded or ostentatious.

Why do you believe there has never really been a regionalist push for Midwestern writing in the past like there has with the South or even the West Coast?
This could be a term paper of a response! I’ll say succinctly that the South is a very energetic place, linguistically, mythically. They love to communicate, and it’s beautiful when they do, so driven by voice and rhythm. The West Coast, I think, asserted and identity based in creative pursuit—artists, weirdos, loners, showboats all collected there, and continue to, for the express reason to communicate. It might be a stereotype, but Midwesterners are not known for generosity of expression—we’re a stoic folk, and taught to be. I had a professor say that Midwestern kids couldn’t wait to scatter to places where they could finally speak up, be strange.

How do you feel about social media to promote your writing, and do you use it?
I’m typically sheepish about touting my publications, but I love it when people do it for me. Facebook is great for this—I love to get tagged in a journal’s status, or by a friend who’s stumbled into me online or in print. But I’m very self-conscious of bombardment. The goal is to be publishing, right? If I’m lucky to have that happening, I don’t want to barrage. So I like sharing fellow writers’ successes. Regarding Twitter, I use that mostly to rattle off my own curiosities, jokes, and fixations—I definitely see it as the development of a voice, a persona, which can be a promotion of a sort.

Favorite book?
I return to a few quite often: Reasons for Moving, Darker, and The Sargentville Notebook by Mark Strand; Austerlitz by W.G. Sebald; Whitman’s Leaves of Grass; the short stories of Ray Bradbury; Emily Dickinson’s poems; Jesus’ Son by Denis Johnson; Big Back Yard by Michael Teig. Lots of others, of course.

Favorite food?
There’s a vegan café and bar in Denver called City O’ City that serves seitan buffalo wings. As a vegetarian with fond memories of certain snacky meats, these things live in my dreams. Hey, Denver friends: airmail me some!

If you could have coffee (or tea or a beer) with any literary figure, alive or dead, who would it be?
I think an afternoon spent drinking tea with Ralph Waldo Emerson would inspire me for life. Wisdom, wit, vision, and, of course, transcendence. I think I’d just be vibrating the whole time. And I bet I could convince him to take a walk afterwards.

Where can we find more information about you?
I keep a personal website, which houses all of my publications, at www.justinrunge.me. Also, the magazine for which I serve as poetry editor, Parcel, can be found at www.parcelmag.org.