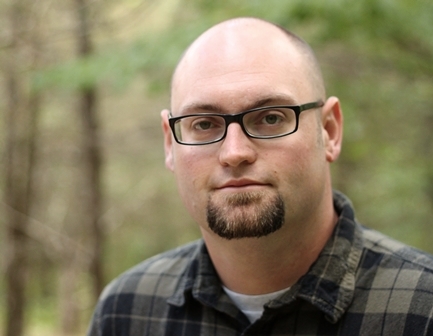 Justin Hamm, a lifelong Midwesterner, is the author of the chapbooks Illinois, My Apologies (RockSaw Press, 2011), and The Everyday Parade/Elegy for Sounds Forgotten (Crisis Chronicles Press, forthcoming). The multi-hyphenate talks with us about his exciting new journal the museum of americana, the petroglyphs of southern Illinois, and what nostalgia means to him.

MG: First things first, tell us about your Midwestern roots.

JH: I’m a lifer. I grew up in one of those small cities that sprouts up here and there in the middle of the ceaseless cornfield called central Illinois. I lived for a few years in the foresty hills of southern Illinois, and now I’m not too far from Twain territory in Missouri.

I’ve seen other places, and there are plenty of other places I hope to see. But I can’t really imagine myself at home anywhere else. I’m kind of tuned into the rhythm of the seasons here, if that makes any sense. This location is central to my writing and my worldview.

JH: Until we finally pave the whole planet, I don’t think there’s a region on earth that isn’t defined in some major sense by its landscape, and the Midwest is no different. Traditionally, the agricultural lifestyle has been harsh and Midwesterners have relied and deep tradition and cooperation to survive the hard times. Even as the region changes, that element continues to be found here, especially in the small towns and farming communities.

But there’s another, almost opposite element at work, too. A lot of young people want to get out and see something else. The sameness of the landscape, the flatness of the voice and the repetition of tradition can turn the Midwesterner’s imagination into a survival weapon. Say what you will about Greenwich Village, but it was Minnesota that made Bob Dylan a surrealist.

MG: One of the big things we focus on at Midwestern Gothic how overlooked the region is, both from a cultural/literary perspective. Agree? Disagree? If you agree, elaborate.

JH: The tradition here doesn’t have the notoriety of, say, the Southern tradition, if that’s what you mean. Think about it. Faulkner was a regionalist. So was Barry Hannah. But you never hear them called “regionalist,” the way a Midwestern writer would be called that. They’re “Southern,” as if that’s somehow not a form of regionalism but its own superior club. And I’m sure some scholar has written a very convincing paper on why that’s exactly the case. Certainly the Southern tradition deserves its reputation. But the point I’m trying to make is that the Midwest needs a couple of Titans to rise up, writers who are consciously interested in representing the regional culture and history of the place.

MG: What’s the most interesting thing you’ve done or seen in the Midwest?

JH: I have a friend who is an outstanding amateur photographer. One of his major subjects is the hidden petroglyphs of southern Illinois. I went with him on a shoot a year or two ago. In a heavily wooded area up on the side of a bluff was a rock shelter, and the underside was decorated with these amazing petroglyphs. The place wasn’t two whole football fields from a little trailer park town of a couple hundred people, and yet nobody except a few local experts knew the petroglyph site was there. Imagine how people would react if they knew they were going about their business a couple hundred yards from a site where authentic Ancient Egyptian art was hanging out on the underside of a rock shelter. But nobody was too terribly excited about the petroglyphs. Which is probably a good thing – the more people who know about them, the greater the chance of vandalism and defacement.

Anyway, while my buddy set up his camera, I ran my fingers lightly over the petroglyphs and quietly meditated on the history of the place. It was something I’ll never forget.

MG: What do you think will define the region going forward? Are there any cultural shifts or movements happening that could tip the scales?

JH: I believe there is a continuing acceleration of the same issues that have been in place for decades. Small towns are dying more and more and culture is becoming homogenized through corporate expansion and the need/desire to make a profit.

Instead of places where authentic culture remains, we now have a lot of small towns that are really just strip malls done up to give the impression of a quaint culture that no longer exists. Come for the fabricated charm and don’t forget to buy the trinkets. Not all the people in these places see it as a way to draw tourists, of course. And certainly the alternative—the loss of these traditions entirely—isn’t preferable. But most of the small towns that don’t embrace this model are in ruin, or near ruin, despite the best efforts of the citizens. They’re just a collection of scrapyards strewn over the map. A road trip through this part of the country can break your heart.

MG: When you’re an adult, there are no limits, and you get to do all sorts of things no kid could dream of doing. Why do you think so many people still yearn for their childhood?

JH: I think that’s a relatively charitable view of adulthood. I feel lucky because I happen to feel like I have the most blessed life possible, but I probably disagree with the premise. Adulthood, as it is experienced by most people, seems to be all about limits. Sometimes these limits are beyond our control, as with sickness, generational poverty, governmental tyranny, et cetera. And some of these limits are all of our own making, all tied to a particular lifestyle we hope to attain. But they’re still very powerful. Want to go to college? Here’s a load of student loan debt. Want to have a family? Here are the insurance bills. Don’t want the neighbors to whisper about you behind your back? Here’s what it costs to re-side the house. Now you’ve got to make a steady income and your options for what you do with yourself are far narrower.

As a child, you have no responsibilities. Everything you experience you experience with the wonder of a first-timer. You have all the time in the world, and all avenues are still open to you. And best of all, the possibility of magic still exists; it hasn’t been reasoned out of you yet. That’s an idealized picture of childhood, of course. For some, childhood is a horror story. But if you happen to have experienced even a fraction of that idealized childhood, you can’t be blamed if you long for it now and then, even if you’re perfectly happy with the life you have.

MG: Tell us about your projects—What inspired you to work on them, what are they all about, etc.

JH: I have a couple of poetry chapbooks—Illinois, My Apologies, released by RockSaw Press last year, and The Everyday Parade/Elegy for Sounds Forgotten, soon to be released by Crisis Chronicles Press. The first deals pretty openly with aspects of growing up in the Midwest. The second, which is going to be printed in an interesting way in order to approximate the experience of listening to a record, carries some of those same themes but also deals a lot with sound and music. I think of it as a double album. It has an overall cohesiveness, but the two “sides” also work together, just as the sides of records used to have to be unified but also work together in the days of LPs.

I also have a full-length collection called Unexpected Harvests that’s out pleading its case to editors at the moment. It’s made up of poems from these chapbooks as well as newer poems.

And late this summer I started a new online literary journal called the museum of americana. We’ll be publishing our first issue near the end of October. I’ve been wrapped up in Midwestern culture for a long time, and I see that as the core of where I’m working from. But I have also been interested in broader Americana for quite a while and I wanted to reach out to people who feel the same way. I feel like historical American culture is weird and wonderful and can make excellent building material for new art. We’ve assembled an excellent staff, and we’ve been completely knocked out by the quality of submissions we’re getting.

MG: What’s been your favorite part of the process?

JH: The best part of putting together the poetry collections was beginning to see all the hours of drafting and editing individual poems turn into something cohesive, maybe even a real book. We all have our obsessions and our idiosyncratic patterns of thought, and finally placing my poems alongside one another and considering how best to emphasize–or in some cases to mask—those obsessions and patterns of thought taught me a lot about myself as an artist and as a person.

We’re pretty early on in the process with the museum of americana, and I’d like to say that my favorite part will be putting out an issue and finding readers for writers who are doing something we as an editorial team find fascinating and important. After all, that’s the goal of the publication.

But at this point the best part has been receiving the support of writers as we make our way as a beginning magazine. Our idea seems to really resonate with a lot of people, which means we must have stumbled upon something that has a chance to be good.

MG: What’s on the horizon for you?

JH: Well, I have the chapbook coming out from Crisis Chronicles Press, and hopefully, the longer collection will land with a publisher here shortly. I’m always writing new poems without necessarily worrying if they’ll fit into a book, but recently I’ve been writing these strange little poems that all seem to exist in a weird folk tale world. That has the beginnings of a longer project, and at some level I think I know that. But I don’t want to admit to myself that I’m writing what might be “a book” until I’m almost there. That way I feel like I have the freedom to try anything I want at any time, without being married to a project.

We also have the first issue of the museum of americana coming up in a little over a month, which is exciting. Longer term, I see us trying to expand into print in one way or another. And I have what I hope are some really interesting ideas for fiction and poetry anthologies that I plan to pitch to a few editors in the near future.

JH: You can read about my creative work at: http://noiseforitsownsake.blogspot.com

Illinois, My Apologies is sold out through the press, but I have a handful of copies left. So if you’re interested in Midwest-themed poetry, you can drop me a line at justinhamm2002@yahoo.com and I can arrange for you to get a copy.

If you’re interested in the museum of americana, this is the place to go: http://themuseumofamericana.wordpress.com

JH: That’s tough. Do they have to be my words? How about “the country I come from?”

One Response to “Interview: Justin Hamm”