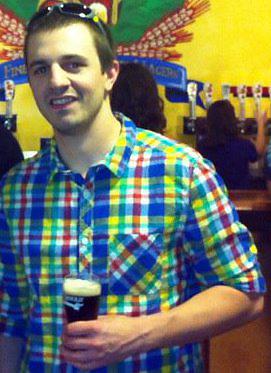 How long have you been writing?
As a kid I really didn’t like to read, much less write. I think the seeds of writing got planted with a more general interest in storytelling. My grandpa Gordy was a great coffee shop gossip in my hometown, and I remember always being captivated by the stories he told and was being told.

What’s your connection to the Midwest?
I was born and raised in the small of town Lyons, Nebraska. My mother’s family has deep Nebraska roots, and my father is a transplant from Illinois. Also, I attended undergrad at Quincy University in Quincy, Illinois, where I currently live. Except for a short stint in the Southwest, the Midwest has always served as my home base.

How has the Midwest influenced your writing?
For a while I attempted to rid my writing of the Midwest, but it seems to always creep onto my pages in two ways.

1) In general, I have found many Midwestern people to possess a politeness that sometimes so severe that comes off rude. There is a sort of aversion to confrontation, where people do or say or go along with things because it’s easier than conflict. This kind of dynamic lends itself well to art. I often end up with these types of characters and their barbed silences.

2) The other way the Midwest finds its way into my writing is the landscape, or rather the expanse of the landscape. Doing research for my thesis I found an observation by David Pichaske that basically said that while many regionalist writers play with landscape, Midwestern writers often open their work with space itself. I’ve found this to be true of my writing.

Why do you believe there has never really been a regionalist push for Midwestern writing in the past like there has with the South or even the West Coast?
I wrote a creative Master’s thesis concerning regionalist Midwestern literature, so I had the opportunity to think about this a fair bit. It seems to come down to the amorphous nature of the Midwest. Where does it begin and end? Originally, the term “Middle West” was used in the 1880s to refer to Kansas and Nebraska, after which around the early 1900s the term’s reference expanded to include northern plains states and the Old Northwest as well—at least that’s how this one scholar James R. Shortridge explained it. But the best description I found was from Pichaske (the guy I mentioned previously), who said that the Midwest emerges where “seed caps yield to Stetsons, work shoes to cowboy boots, and planted crops to cattle range.”

Additionally, there’s the issue that the Midwest lacks a defining historical moment or movement for it’s people to latch onto. The South has the Civil War. The West has manifest destiny. New England is the birthplace of the American Revolution. Sure, the Midwest has the development of industrial agriculture, but this lacks some serious sex appeal. Plus, I think the Midwest and those making it home have done a poor job of singing its praises.

How do you feel about social media to promote your writing, and do you use it?
I think it’s important to at least create a presence online. Personally, give me the website and I’ll open an account. I use Facebook, Twitter, Google+, Instagram, Tumblr, GoodReads, etc. (Visit my website too: www.franciscasey.com.) I love online social media (though I’m less on content creating and more on lurking), but I know many don’t love it. Those writers who don’t love it should not feel a need to jump into it all. It comes down to what you actually write.

My favorite books tend to swing with my moods. I have a fear of commitment too, so I can’t pick just one. A few I come back to year after year are:

Anything written by Louise Erdrich, especially The Plague of Doves
Delights & Shadows by Ted Kooser
Drinking Coffee Elsewhere by ZZ Packer
Here, Bullet by Brian Turner
So Long, See You Tomorrow by William Maxwell
The Lone Ranger and Tonto Fistfight in Heaven by Sherman Alexie

If you could have coffee (or tea or a beer) with any literary figure, alive or dead, who would it be?
It’d be a beer for sure—most likely an IPA of some sort. The person would be living because why hope falsely and that person would be either Anthony Doerr or Louise Erdrich. It’d just have to come down to the writer who could text me back most quickly.

Where can we find more information about you?
Find me at www.twitter.com/caseyfrancis or visit www.FrancisCasey.com, where you can find links to all my social media wanderings.