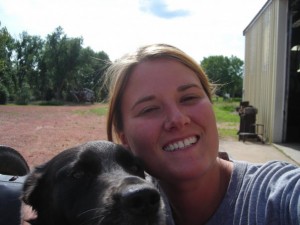 How long have you been writing?
I’ve been writing since I was a kid—lots of rhyming love poems and sad poems. I finally became a writer when I was in my second year of grad school, around 2004.

What’s your connection to the Midwest?
There isn’t much about me that isn’t connected to the Midwest. I was born and raised on a grain farm in southwestern North Dakota, along the edge of the badlands. My Ukrainian immigrant great-grandparents established the farm in 1908, and my folks still live there (and always will). After college, I left North Dakota for South Dakota, where I now introduce college kids to some of our greats like Willa Cather, Louise Erdrich, and Ted Kooser. The Midwest is my home; it’s one of my true loves. I’ll never leave the Midwest, except maybe to live on a beach in Puerto Rico.

How has the Midwest influenced your writing?
Completely and irrevocably. I can’t imagine that this big sky, this open prairie, those abandoned farmhouses, the Missouri River, sage, antelope, and cheap, canned beer won’t continue to inspire and strike me. I romanticize the hell out of the Midwest in my writing, but I don’t think I am naive. At least, I hope not.

Why do you believe there has never really been a regionalist push for Midwestern writing in the past like there has with the South or even the West Coast?
Because everyone else thinks we’re a bunch of ignorant, racist, homophobic, anti-women hicks with nothing to say. This is largely because whenever we make the news, it’s probably because of some ignorant, racist, homophobic, anti-women incident. People mistakenly believe that fly-over country has nothing to contribute, or that we couldn’t possibly understand how the world works. I also think literary magazines in places like Nebraska, Iowa, and Minnesota are hesitant to publish Midwest-themed literature because they don’t want to be labeled as hokey. It seems one can’t be edgy and write about the farm at the same time. This makes me sad.

How do you feel about social media to promote your writing, and do you use it?
I think it’s a fine tool to use. If I have a reading coming up, or am presenting at a conference, or have a poem published, or discover a great literary magazine (like Midwestern Gothic!) I’ll certainly post about it on Facebook. I probably should use social media to network more, but Words with Friends takes us so much of my time.

If you could have coffee (or tea or a beer) with any literary figure, alive or dead, who would it be?
Willa Cather. Goldang, I love that woman.

Where can we find more information about you?
I don’t have a website, and I don’t blog anymore. Google me, I suppose?