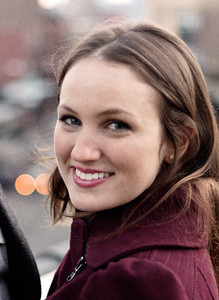 How long have you been writing?
I’ve been writing since I was a child. My first complete story was about a monster that was actually quite nice and was afraid of children, brilliantly turning the monster stereotype on its head. Then Pixar stole my idea, produced Monster’s Inc., and made millions. I’ll always be bitter. And that motivates me to this day.

What’s your connection to the Midwest?
I was born and raised in Ann Arbor, Michigan. My dad taught at U of M from ’69 until his retirement, and my Mom was raised in small Michigan towns like her parents before her. If we take the Michigan Militia out of the equation, I am an absurdly proud Michigander.

How has the Midwest influenced your writing?
The gentle hospitality and warm smiles of the Midwest often live side by side with a fear of social change, and this is is still mysterious to me. I think that may be why I am often drawn to stories about what’s beneath the surface, and questions of whether a person’s differing internal and external worlds can simultaneously be authentic even if they are paradoxical. Additionally, I can’t seem to escape a fixation with the transplanted Midwesterner. A clichéd image of the Midwesterner is that of a young girl from Ohio getting off the bus in New York or something, her eyes wide and her heart ready to be broken and trampled on by the “real world.” I used to find this silly and inaccurate… and then I actually moved to New York City. I still feel like that girl every day! So the way that Midwestern culture interacts with other regions is constantly fascinating to me.

Why do you believe there has never really been a regionalist push for Midwestern writing in the past like there has with the South or even the West Coast?
A friend of mine recently divulged to me that he didn’t even know which states counted as being Midwestern. Upon a quick Google search of Midwestern states, we discovered that many of our guesses had been wrong. The Midwest is so vast in the American consciousness that the awareness of its culture seems to be state-bound, and the larger sense of the place gets passed over. There must be an overarching cultural connection between each and every Midwestern state (besides niceness), but it’s sometimes harder to wean out.

How do you feel about social media to promote your writing, and do you use it?
I feel like I need to start using it more. I reluctantly brag to my friends about myself on Facebook. And so I guess I have friend-fans. My Aunts always pressed “like” for stuff about me, so that’s awesome. In fact, as I’m writing this, I am inspired to begin a Twitter account. So in about ten minutes you can follow me on Twitter.

Favorite book?
Oh, we all know there can’t be just one so I’ll categorize. Book I’ve held dearest for the longest? Matilda by Roald Dahl. Book that made me book-gasm during the entire read? Love in the Time of Cholera by Gabriel Garcia Marquez. Best American book? East of Eden by John Steinbeck. Best written book I’ve ever come across? Mrs. Dalloway by Virginia Woolf. Book that I wish I wrote? We Have Always Lived in the Castle by Shirley Jackson. This question makes me feel like I’m plucking my eyelashes out one by one. We have to move on.

Favorite food?
My Mom’s Szechuan chicken and peanuts. She is an Irish-Slovakian Michigander and she cooks the best Chinese food you’ve ever had. Go figure.

If you could have coffee (or tea or a beer) with any literary figure, alive or dead, who would it be?
I would go to an alehouse with Shakespeare, and I’d tattletale on all the critics who say he didn’t write his plays. And they’d get in trouble. And then I’d be Shakespeare’s best friend and sidekick because I always believed in him. It’s the perfect plan.

Where can we find more information about you?
You can find me on my website, brigitkellyyoung.com. As of question # 5, I am follow-able on Twitter at @BrigitKellyY.