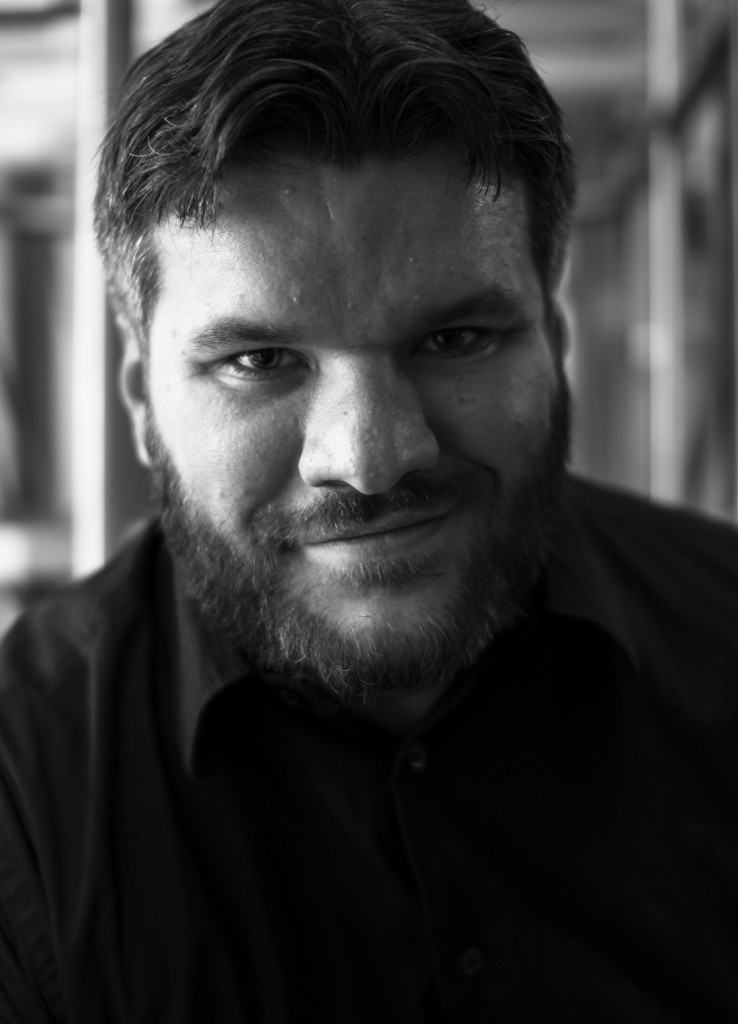 Matt Bell‘s debut novel In the House upon the Dirt between the Lake and the Woods was longlisted for the Flaherty-Dunnan First Novel Prize. He is also the author of two previous books, How They Were Found and Cataclysm Baby. His writing has been anthologized in Best American Mystery Stories, Best American Fantasy, and 30 Under 30: An Anthology of Innovative Fiction by Younger Writers. He teaches creative writing at Northern Michigan University.

Matt Bell: I’ve lived in Michigan my entire life: I was born in the Muskegon area, grew up in Hemlock near Saginaw, and lived in that area until I moved to Ann Arbor in 2007. Last year, I took a job at Northern Michigan University in Marquette, and so we’ve been in the Upper Peninsula since 2012. Most of my dad’s family lives near Saginaw, and most of my mom’s lives in the U.P, so our family has pretty serious roots in the state.

MG: Your most recent novel, In the House Upon the Dirt Between the Lake and the Woods, is a mythical novel about a newly-wed couple that escapes to the wilderness in order to build their lives and a family together. What was the inspiration for this novel?

MB: I had the voice before I had any of the ideas for the novel, but the first passage I wrote is one that isn’t in the book anymore, but clearly inspired much of it: The husband, who narrates, was watching his wife singing, and as he watched he began to have a vision of all these shapes waiting inside her bodies, forms they might bring into the world together. So that’s the originating image.

MG: In the House is a very ambitious story, yet sparse and restrained at the same time. How did you find the balance between setting a story in an alternate reality, yet not letting the world you built overpower the characters?

MB: I think a lot of that balance is created by how stripped the world is: there’s the dirt and the house and the woods and the lake, there’s the husband and the wife, there’s the fingerling and the foundling, there’s the bear and the squid. There are additional permutations of all of these elements, and certainly they all grow more complicated as the book goes on, but at heart it’s a fairly simple setting, I think. It’s certainly less complicated than setting a story in a contemporary city, with its endless streets and neighborhoods and communities and histories. So in some ways, the setting serves the complexity of the story, by giving it a simpler field on which to play out. 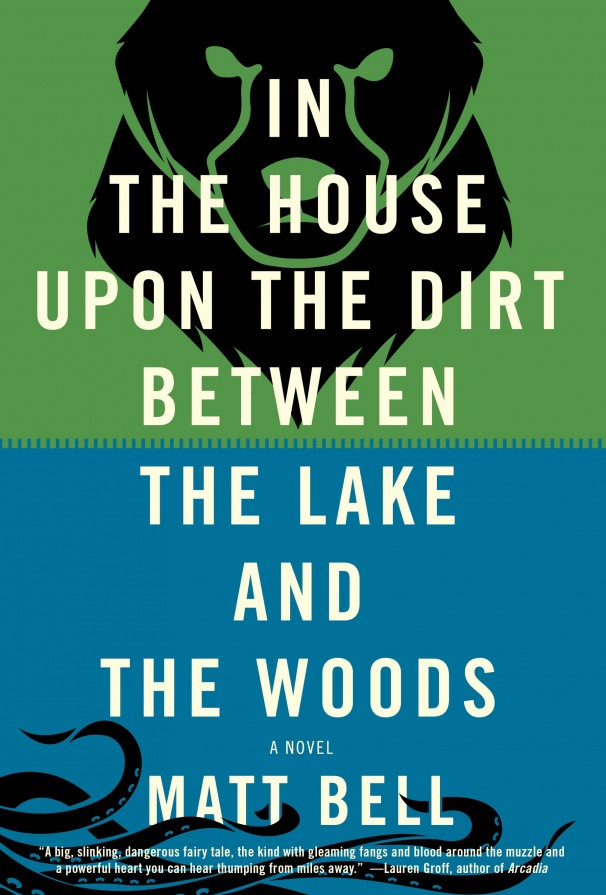 MG: The voice of In the House seems very connected to the style you used in Wolf Parts and Cataclysm Baby—what is it about this particular voice that led you to choose it for In the House?

MB: I think the voice in In the House is closer to Cataclysm Baby than Wolf Parts: Wolf Parts has a more traditional fairy tale voice, I think. What draws me to the voice I used in In the House is how it both incorporates the fairy tale and the myth and the biblical while also remaining grounded in a more concrete reality. I think the fantastical elements of In the House are for the most part rendered concretely, unlike the abstract kinds of depiction you might see in Grimm or Greek myth, and I think there’s a lot of interesting effect created by that, including, perhaps, a greater sense of weight to the world and the actions that occur there.

MG: All your characters, even the bear and the squid, have dark secrets they fiercely try to protect. Care to share one that didn’t make it into the novel?

MB: I’m not sure there are any that I know that didn’t make the book, but there are some mysteries still remaining, even for me. You find out in the book how the husband feels about his own parents and the family and friends they left behind when they came to the dirt, but you never really find out why. What happened to him in the old world, and how does that make him who he becomes once they arrive in the dirt between the lake and the woods? I don’t know the answer to that. I think it’s always been important for me not to know, exactly—that I needed there to be parts of his motivation and character makeup that remained mysterious to me even to the very end.

MG: As senior editor of Dzanc Books, I’m sure you’ve read hundreds of submissions. Is it a challenge to stay true to your own voice in a sea of emerging writers?

MB: No, I don’t think so. What the best submissions do, hopefully, is keep raising the bar. You get a pretty good idea how good the work out there is, how very accomplished the competition for attention is. That’s never a bad thing. It pushes me to do more, try harder.

MG: At Midwestern Gothic, we often focus on how the region is somewhat overlooked, from a cultural/literary perspective. Why do you think this is or isn’t the case?

MB: Having also lived in Ann Arbor over the past few years, and one thing that I know we’d both agree with is how vibrant and varied the literary culture is there, from the universities to the local indie scene and the different bookstores and so on. Moving up to Marquette, I of course found another interesting and accomplished group of writers and editors. There’s good stuff happening in every city of Michigan, and I’m always excited when it receives national attention. That said, I think the Midwest is sometimes overlooked not because there isn’t good work, but because it’s such a steady, unpresuming part of the country. In an essay in the Iowa Review, Michael Martone compares the Midwest to the “skin” of the country: “I think of it more as a web of tissue, a membrane, a skin. And the way I feel about the Midwest is the way my skin feels and the way I feel my own skin—in layers and broad stripes and shades, in planes and in the periphery. The Midwest as hide, an organ of sense and not power, delicate and coarse at the same time. The Midwest transmits in fields and waves. It is the place of sense. It sometimes differentiates heat and cold, pain and pleasure, but most often registers the constant bombardment, the monotonous feel of feeling. Living here on the great flat plain teaches you a soft touch, since sensation arrives in huge sheets, stretched tight, layer upon layer, another kind of flood.” I’ve always liked that. I’ve always liked the way it assumes that the Midwest is something easy to forget about, because it’s always there, unassuming as your own forgotten skin.

MG: Complete the following sentence: You know you’re from the Midwest when _______?

MB: “…say pop instead of soda.” I got so tired of people pointing it out when I was traveling that I trained myself to say soda. Now my wife accuses me of trying to be fancy. That’s the Midwest.

MB: This is like asking me to name which one of my neighbors I love the most, which feels like a bad idea. I’m more comfortable with lists, so here’s some writers I really admire: Ander Monson, who wrote so well about the Upper Peninsula. Michael Kimball, who is usually thought of as a Baltimore writer but grew up in Lansing. Alissa Nutting, writing in Ohio. Matthew Gavin Frank and Michael Czyzniejewski, out of Chicago, now in Michigan and Missouri. Michael Martone, from Fort Wayne. Anne Valente, from St. Louis. Bonnie Jo Campbell, in Kalamazoo. And of course there’s all the talent, both writing and editing, that we had around us in Ann Arbor and Ypsilanti, which I was so lucky to be around for five years. I could go on forever. There’s an endless amount of talent in the Midwest, and I think that it’s clear that our writers are continuing to gain more and more attention.

MG: What’s up next for you?

MB: I’m in the later stages of a new novel, set in contemporary Detroit. And I’m looking forward to being able to share more soon.