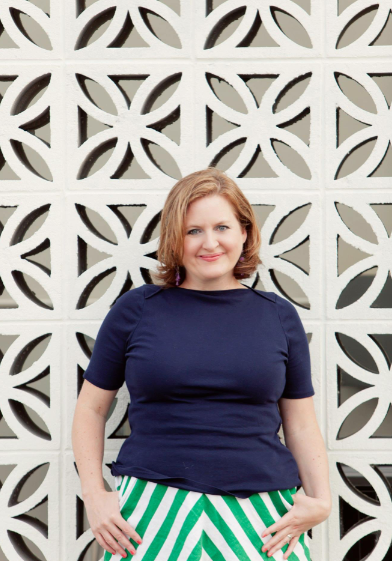 How long have you been writing?
Can you believe I just started yesterday? I wish that were true. I’m that annoying kind of person that has been writing ever since I was in the womb, and my mother is very annoyed by that. I’ve always wanted to be a writer. One day, I’m certain my wish will come true.

What’s your connection to the Midwest?
I had a dysfunctional relationship with the Midwest. All I wanted to do was escape. Now through lots of therapy, I’ve achieved a healthy relationship with the Midwest. Born in Lansing, raised in Traverse City, transplanted to Coopersville, matured in Grand Rapids, a dalliance in Detroit, and then I left Michigan to roam New York. Then I realized that Michigan’s lakes and morels and Petoskey stones called to me, so this is where I came back to have my family and put down roots. Now, I only escape for random weekends and then I come home and put on yoga pants and breathe deeply. I don’t actually do yoga.

How has the Midwest influenced your writing?
First, the environment, followed closely by quirky characters, vibrant dialogue, and everything being slightly skewed in an awkward yet funny way. All of my books are set in Michigan. I wanted to represent where I come from, but it’s more than that. I think I’m a product of living here. I’m pretty sure it’s infected my blood somehow, but in a good way. In a way that some orchids can only survive in certain areas. I’m pretty sure I’m some kind of Michigan orchid. I’m proud of being from Michigan and the Midwest.

Why do you believe there has never really been a regionalist push for Midwestern writing in the past like there has with the South or even the West Coast?
I think, maybe, it’s an identity issue. Who are Midwesterners anyway? I think for a long time, Midwesterners have been thought of as lacking in some way. We lack a southern accent. We lack forward thinking. We lack progressive ideas toward cars and business and food. All of that is bunk, actually. Midwesterners are colorful and dark, brooding, emotional, judgmental, loving, and we say fun things like ‘pop’ when we’re talking about drinks. We’re more than Hemingway and we’re more than Detroit. The only way to fully explore our identity is by hearing a lot of different voices. It might also help if a bunch of movie stars got together and sang a song about us, but that’s just brainstorming.

How do you feel about social media to promote your writing, and do you use it?
I’m on Twitter and Facebook and I’m pretty sure I’ve developed four and a half new readers through social media. I’m joking. Social media is a great way to talk about what you want to talk about. I post updates on books I’m narrating, blogs I’ve written, random thoughts, and the occasional picture of what I’m about to eat. You know, important stuff like that.

Favorite book?
I still think The Virgin Suicides by Jeffrey Eugenides is a perfect novel. I’m also a huge fan of Shirley Jackson’s The Haunting of Hill House. I wish I could narrate The Great Gatsby or anything by Stephen King or Margaret Atwood.

Favorite food?
Sandwiches. But then I tried to give up gluten, so now it’s dips. You can turn basically any sandwich into a dip by adding sour cream or cream cheese and then baking it. Also, wine is a favorite food. It is a food. I’m standing by that.

If you could have coffee (or tea or a beer) with any literary figure, alive or dead, who would it be?
Okay. I’ve spent a lot of time thinking of this. Maybe too much time. Here’s what I’d do: I’d have J.K Rowling rent a castle in Scotland (She can afford it). I’d show up with Stephen King, Lionel Shriver, and Simon Cowell, just to keep things interesting. Graham Elliot would cook us dinner, we’d all play Cards Against Humanity, and then retire to the library to tell ghost stories where Simon Cowell would tell me I was “bloody awful” but mean it in a good way. In the middle of the night, I’d sneak downstairs and eat the leftover crème brulee, but not the fancy edible flowers that those chef-types like to use.

Where can we find more information about you?
You can find me on my website tanyaeby.com, or on Twitter @Blunder_Woman. I’m also on Facebook. And if you like my work, please check out one of my books. I’m particularly proud of Tunnel Vision, a Gothic story set in the 1930s and at the Traverse City Insane Asylum (now renamed). My mom worked there back in the ’80s and gave me a tour of the tunnels, and it’s haunted me ever since. Apparently, now, they make artisan cheeses there or something. If you want to see titles I’ve narrated, just enter my name on Audible or Amazon and a whole bunch of stuff will pop up.