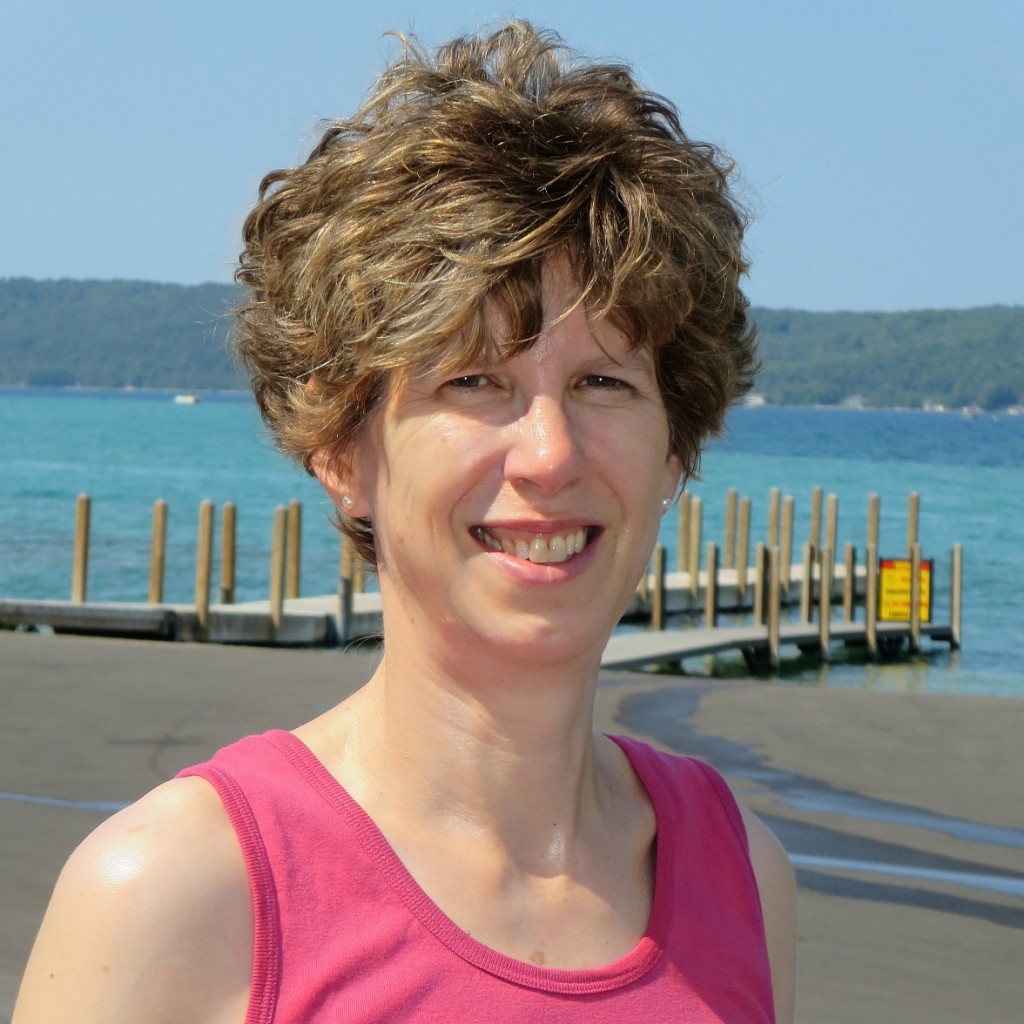 How long have you been writing?
Like a lot of writers, I’ve always been writing and don’t really remember a time when I wasn’t. My first story was called “The Thursday Elephant” and I wrote it when I was six. It was about a shy elephant that would only come out of its hiding place on Thursdays. Clearly I was both a shy and a superstitious child! I mean, why only on Thursdays? The times when I have stopped writing loom much larger in my memory. It’s scary to quit, especially for any long stretch of time. I’ll do anything now to capture time to write and avoid that terror. The worst days writing are worlds better than the best days not writing.

What’s your connection to the Midwest?
I have lived, gone to school, and worked in Michigan and Wisconsin for much of my life. But I was born in New Hampshire, a transplant from the East Coast, the daughter of decidedly Yankee parents. Navigating between Yank directness and that unique Midwestern firewall of cheerful distance has made for some interesting cultural collisions. Yanks have an opinion on everything right down to the angle of that day’s sunset and will tell you so straight and true, not always with a mind to spare your feelings. Midwesterners find some weird subterranean ways to tell you exactly what they think while smiling and thanking you for taking the time to listen. I still don’t quite have that gap figured out. With the Yanks I leave a conversation knowing a bit more than I aimed or even wanted to know, but days later I’m sometimes still trying to figure out what the Midwesterner has really just told me. Then I married a Southerner. Everything and nothing gets said in the course of a typical day. Kind of like my writing process, come to think of it.

How has the Midwest influenced your writing?
Because I am such an uneasy Midwesterner, tethered here but always a bit of an outsider by temperament and family history, early on I was drawn to other outsiders. I formed my closest friendships and deepest fascinations with the kids of the Eastern European immigrants to my small town. As this was the late seventies and the eighties, these families had fled repressive regimes and very hard lives. The things I found perplexing about the Midwest these immigrants found easy, and freeing. The farm landscape of Southeastern Michigan that I thought dull compared to the White Mountains or the Atlantic felt familiar to the Romanian, Polish and Yugoslavian émigrés who had left rural villages behind. Owning a bakery, or working on the line at GM or Ford for union wages that paid for a house and car, was pure liberation. As they were accustomed to not speaking freely in their home countries, they were perfectly comfortable with the Midwestern friendly reserve that says much by saying little. And my Yank self felt at home with that Eastern European opinionated gusto and passionate curiosity in ways I didn’t feel at home in Michigan. So the Midwest first influenced my writing by inspiring me to write about other places to find my own sense of belonging. Many of my stories are set in Russia, and right now I’m at work on a novella set in St. Petersburg. But these immigrants also taught me to think of the Midwest as a place of freedom, peace, and a healthy sense of privacy. When I do write about Michigan, which is nowadays mostly where my fiction is set, my characters are often Midwestern “lifers” who don’t fit in, usually because they are behaving badly and don’t realize it until the damage is done, which I guess is another Yank influence.

Why do you believe there has never really been a regionalist push for Midwestern writing in the past like there has with the South or even the West Coast?
Why the Midwest has been late to define what makes its literary art unique to the region is perhaps a question of perception. I think readers view the Middle West as fundamentally American, representing the whole, rather than a distinct part, of our country. Our great Midwestern authors of the past, like Hemingway, Dreiser, Richard Wright, Twain, Laura Ingalls Wilder, and even a writer like Zane Grey, an Ohio native, live in the public literary imagination as capturing a quintessential American experience. While New England lit and Southern lit evoke specific regional associations, we talk about these Midwesterners as telling American stories. Their characters are Chicagoans or Michiganders rather than Southerners or Yanks, their stories tied less to regional histories and demons and more to the joys and terrors of their American places and times. I see this view of Midwestern places as America’s places in my own experience of writers I admire. When I make literary pilgrimages to New England, I visit the writers’ homes—Louisa May Alcott’s and Nathaniel Hawthorne’s houses, Thoreau’s cabin at Walden Pond. My Midwestern pilgrimages are to the places of fiction—Hemingway’s Big Two-Hearted River on the way to where my husband grew up in the UP, Dreiser and Stuart Dybek’s Chicago, Jeffrey Euginedes’ Detroit, Laura Kasischke’s Benton Harbor. I’m drawn to find the Midwestern writers’ mysteries and hearts where their stories live rather than in the spaces where they work.

Now I actually see a strong push towards defining our regional literature in journals and in the national arts media, as writers such as Kasischke and Bonnie Jo Campbell step into national literary influence with their excellent work. Midwestern Gothic is a wonderful “push”, and literary festivals like the Voices of the Middle West festival MG organizes with the University of Michigan’s Residential College are bringing the region’s literary vision to wider public attention and conversation.

How do you feel about social media to promote your writing, and do you use it?
Since I teach in an undergraduate creative writing program devoted to community, I do use Facebook—Twitter too, but less often—to promote writing events, including my own. I was a late-comer to social media because I feared the time and care it takes to be active in a meaningful, non-obnoxious way on those platforms. I had mixed feelings before using social media, but there’s no doubt that Facebook reaches more writers and readers than any other media I have access to, and helps enormously with getting the word out. Now I’m happy to use social media to reach students and readers. Drawing more readers to book stores and other intimate reading spaces is wonderful for literature, especially for the independent voices who do not have a big publishing house to promote their work.

Favorite book?
Impossible to answer! I’m embarrassingly indiscriminate in my reading, which I think helps me as a writer; keeps me open, accepting, exploring. I’m often in love with whatever book I’m reading at the moment. I just finished teaching Giovanni’s Room to my university freshman seminar and was so moved by the students’ excitement over this book. Every single line breathes. Baldwin captures enormous physical and emotional experiences in intimate, precise detail. So at the moment, this gem is my favorite. I’m a few chapters in to Louise Erdrich’s The Round House. By next week I’m betting it will be my new favorite.

Favorite food?
You’ll think I’m saying this just because it’s a Michigan thing, but I love cherries. My son Bennett’s Pepper Pasta Sauce with his homemade meatballs made from an old family recipe is the hands-down winner of food I love. I follow this meal with my favorite dessert, my son Nathan’s Oreo cake. Yep, Oreo cake tastes as good as it sounds.

If you could have coffee (or tea or a beer) with any literary figure, alive or dead, who would it be?
I would have tea with Ivy Litvinov, an English writer who married the Russian revolutionary Maxim Litvinov. Maxim became an ambassador under Lenin, and then Stalin’s Foreign Secretary. Ivy married Maxim and moved to Moscow in the 1920s after they were both a part of the radical Bolshevik movement In England. As Ivy was both an Englishwoman and a Jew I find this decision remarkable. Moreover, she had two young children and was pregnant at the time she traveled to Moscow. She miscarried on the voyage, and faced a very hard life in the Soviet Union. It’s this time I’d love to ask her about, the point at which what you believe in and whom you love inspire you to change your life so drastically. While in Moscow, Ivy wrote novels and stories, as well as translated Chekhov and other standards of Russian literature. Although Maxim Litvinov figured prominently in the Bolsheviks’ early agitations and crimes and was the architect of the Soviet Union’s foreign policy, Ivy never wrote of her life as a prominent political figure’s wife. The stories she finally published late in her life, in The New Yorker in the late 60s and early 70s, were set stubbornly, some thought, in the English countryside of her youth. Although publishers repeatedly hounded her to write an autobiography of her tumultuous Russian life, until her death Ivy insisted that her original home was her real story.

Where can we find more information about you?
I’m the low-profile type, so the best place to find out more about me is through the Residential College website or our RC writers’ website: http://sites.lsa.umich.edu/rcwriters/