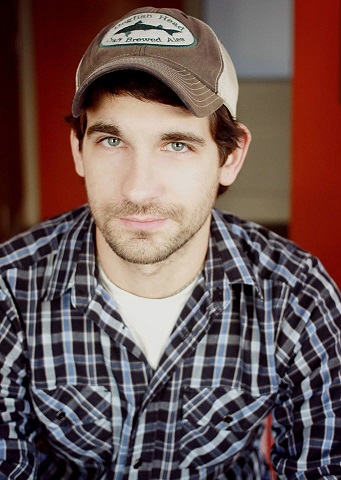 What’s your connection to the Midwest, and how has the region influenced your writing?
My father was born and raised in Stillwater, Minnesota and my family lived there for a while before I was born. I still have family dotting the area around the Twin Cities as well as in Wisconsin. It’s influential because I spent multiple summer vacations driving from New Jersey out to Minnesota and back and so there are a lot of memories attached to the roads and the places of the Midwest. I think, too, that its influential because, even if I wasn’t born there, I’m still of the place in a sense—my father lived a good portion of his life there and so in writing I attempt to connect to that history, even if it isn’t truly mine.

What do you think is the most compelling aspect of the Midwest?
What appeals most to me is the idea that while I’m part of it, I’m also not part of it. My father isn’t very verbose when it comes to telling stories about his childhood/my grandparents, so I’m left with a gap that I’ve spent time filling in with whatever I feel like. In searching for the stories that could be, I’ve found much more there than I ever thought. I’ve also found a lot of connections to other places I’ve lived and I enjoy delving into those to see the sameness and difference that’s possible when separated only by some amount of miles. The landscape itself, too, is appealing because, I think, there’s starkness there, a certain heartiness, that doesn’t exist in a place like suburban New Jersey, where I grew up (or, if it does, I was too busy engaging in the state sport of trying to get the hell out of Jersey to notice). That strength lends itself well to the characters that I typically write about.

How do your experiences or memories of specific places—such as where you grew up, or a place you’ve visited that you can’t get out of your head—play a role in your writing?
Two things come to mind. First, on one trip to Minnesota when I was six or seven, we went to a river or a park or a park with a river. I remember a cave there—nothing big or anything, but there was a stream in it and my father urged me to drink the water from the stream. It was clean and fresh and cool and that always stands out because in my head it is this perfect summation of what a childhood summer should be. It had a little bit of adventure, there was some history (the river used to be where they floated logs to the mill), and my family was there. I’m sure that this memory is different than what happened, but the image I just mentioned is the fiction I remember. I think of that memory because, as I think Flannery O’Connor said—and I’m paraphrasing here—if you make it out of childhood, you have enough material to be a writer for the rest of your life. I use details like that memory often to help shape or add color to a story.

Second, In “Welcome to Milwaukee,” the characters paint those words on a roof. After college I lived in Montana for a year and on one trip back out west, I had a layover in Minneapolis. On the descent, I remember looking out the window and seeing those words painted on top of a house. I think. It could’ve said something else (it may have said Welcome to Minneapolis for all I remember), but I do distinctly remember thinking, “Damn, can you imagine if you painted the wrong city name to screw with people?” That thought stuck with me for the four years it took me to actually write the story. I had it in the back of my head until I realized what I wanted to do with it.

Discuss your writing process — inspirations, ideal environments, how you deal with writer’s block.
I’ll deal with environment first. I’ve learned to write wherever I need to. My writing process is more focused on concentration and focus than location. If I feel it in my gut—if I have the overwhelming urge to get something down—that’s when I do my best writing. Or, rather, I convince myself that’s when I do my best writing. I feel the stories that come out of those spurts are my strongest because I’ve obsessed over little pieces in my head, often, for long periods of time before actual writing. With some stories, if I find myself telling the same story over and over (as if drunk at a party) then I typically turn it into a story somehow as well. Repetition, I guess, is a signal for me that shows I’m in an optimal writing zone.

When I’m not there, though, I force myself. Writing is a job more than it’s a passion for me, because the passionate times are far outweighed by the times when I’d much rather drink bourbon and binge-watch true crime shows on Hulu and Netflix and because of that, there are times when I make myself get up and type. Not write, type. Words, phrases, whatever it is until I find a flow—twenty minutes usually, until my brain realizes I’m not stopping until it gets its act together.

When that doesn’t work, I try two other things. First, I have a couple of books of writing exercises that I dig into. Those are helpful at times for a starting line to dash from. When those don’t, I dive into a box of pieces of paper that I keep in my desk. The pieces of paper are my collection of lines, ideas, et cetera that I have when away from my desk. I try and harvest usable content from that box when I’m stuck.

How can you tell when a piece of writing is finished?
I get to a point where, after three or four (or seven or ten) revisions, that I’m only moving things around in a piece—a comma here, a preposition there, whatever—and that’s one of the indicators that a piece is done or close to done. A second way I can tell is I get a feeling in my gut that essentially makes me think “Yes, I’m ready with this one.” That could be because I think its done or I just want it out of my sight, but either way, I usually go through with a pen, correct some little things and send it off to see what happens. After about ten rejections I’ll go back and look at it to see if it really was done. With so many magazines and journals out there, I feel its better when I feel something is done to see if others do, too. If it’s not done, I go back. But sometimes I get lucky.

Who is your favorite author (fiction writer or poet), and what draws you to their work?
Picking a favorite overall is hard, but Ron Rash is one of my top five for sure. His short stories are some of the most powerful and damning I’ve read in the past decade. I think the Internet parlance is that his stuff “hits you right in the feels” and I’m inclined to agree with that sentiment. He’s brilliant and his stories are accessible and if I keep talking about it I’ll very quickly cross the line into mega fan boy-dom. I would love to share a glass of bourbon with him and just talk books for a night.

What’s next for you?
My debut chapbook, When You Cross That Line, comes out in May. I’m currently working on putting together another chapbook called God in Neon and in April I will be a resident at the Sundress Academy for the Arts in Knoxville, Tennessee, where I will work on my second novel. I have a lot of projects going on and it’ll be like throwing spaghetti at a wall to see what sticks. I’m okay with it.

Where can we find more information about you?
I’m on Facebook, Twitter @slaughterwrites, and I have a website, www.samslaughterthewriter.com. I can be gotten at through any of those and seeing as I spend all day in front of a computer as a copywriter, I’m pretty good with replying.