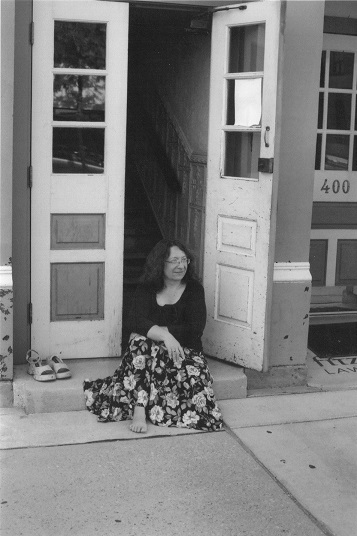 Marianna Hofer’s piece “Every Family has that One Story
that Drives Someone to Steal” appears in Midwestern Gothic Issue 17, out now.

What’s your connection to the Midwest, and how has the region influenced your writing?
I’m a native Ohioan—born and raised in Cuyahoga Falls, and then I made my way to Findlay, Ohio.  The landscape and small towns I’ve enountered come up a great deal in my work, as do the people and that rural Ohio sensibility in those spaces. I’m also a photographer—for several years I obsessively photographed old abandoned farmhouses [I work in b&w film]—I think I see things vanishing, like those houses, and want to hang on to them either in words or visuals.

What do you think is the most compelling aspect of the Midwest?
The beauty in the small towns and rural areas, the people in those areas, who are often very kind and take you in. How even when things are a bit faded or outdated there’s still a beauty to them.

How do your experiences or memories of specific places—such as where you grew up, or a place you’ve visited that you can’t get out of your head—play a role in your writing?
In particular, my aunt and uncle’s dairy farm in Blachleyville, down outside of Wooster, Ohio, where I spent a decent amount of time until they sold it when I was 12. My aunt was my father’s favorite sister, and when he was younger he’d worked on their farm—he and my uncle were both silent men who liked to walk through the countryside.  My father married late, so by the time I was old enough to stay[about 7] on the farm with my aunt and uncle, their kids were grown and on their own. So I’d help milk, slop hogs, all that stuff. I loved the farm, the house with all it’s strange little rooms, but knew I’d be a bad farmer. I’ve written a decent amount of poems using that farm and that time in some way.

Discuss your writing process — inspirations, ideal environments, how you deal with writer’s block.
I usually start with a visual—I’m not good starting with ideas—the visual or moment leads to the idea. Lately that’s been everything from garden clippers to the abandoned belongings of someone moving out in the dead of the night on a small street that’s part of my walk to work. Or someone says something. My  research for ideas is to just go through my day being aware, cheesy as that sounds. I do a lot of my writing in a small studio I have downtown on the second floor of an old building—there are about 20 artists there with studios. I’m the only writer, which can be hilarious some days. I do the first ‘draft,’ which is really just dumping words on the page, and then the real first draft or two, by hand in a journal—I keep an electric typewriter up there to work on when I get more focused on the poem. Eventually I get to the point where I start working on it at home on the computer—I sometimes like fiddling with line breaks more on the computer.

I’ve never been good about writer’s block—I used to walk around town imaging myself a willow in a thunderstorm when I had it, but now I know better and just wait it out by reading other poets’ work and trying not to bother my friends with it.

How can you tell when a piece of writing is finished?
There comes that moment when I find myself in that state of extreme pickiness. I’ll shift a line break back and forth maybe 7 or 8 times, and realize I’m not improving anything, just being self annoying. At that moment I just stop. Sometimes, after a poem’s been rejected 3 or 4 times, I’ll take a look and poke at it some more, but that state of annoying myself is usually a good indicator of done.

Who is your favorite author (fiction writer or poet), and what draws you to their work?
I have to say two, sorry. Jared Carter and B.H. Fairchild. I met Jared years ago when his first book came out; I was in grad school and realized here was someone talking beautifully about the midwest, which is what I wanted to do in my work. His images were so sharp, and his use of narrative—that relaxed, yet alert voice, just got to me. I discovered Fairchild when Art of the Lathe came out, and his use of narrative—and his focus on a specific time and place and people—again, just drew me in. I read and reread both of them a great deal. Both of them write about places and people I know—I sometimes use them as models to get something in my work sorted out for me.

What’s next for you?
I’ve got a second full length manuscript, Perplexed, traveling around to presses, and at least one poetry chapbook—Small Beauty, Potential Heartbreaker—it’s a series of poems about a character known as the apprentice photographer who photographs a lot of abandoned farmhouses, among other things [it is sort of autobiographic]. To keep writing, keep sending work out.

Where can we find more information about you?
I have a website—http://sites.google.com/site/mariannaleohofer/ Unfortunately, not being the most tech focused person in the world, it doesn’t get updated as it should. But there are some poems and photos and such there.