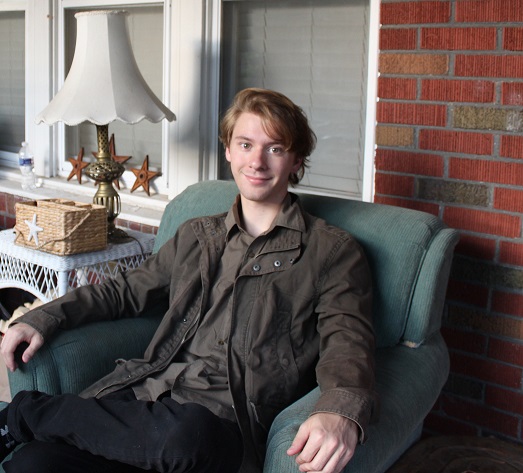 Matthew Byrd’s nonfiction piece “Zero Logic in All That” appears in Midwestern Gothic Issue 19, out now.

What’s your connection to the Midwest, and how has the region influenced your writing?
I’m a dyed in the wool Chicagoan, born and raised on the Northwest Side. A lot of my summers growing up were spent at the Chicago Park District beaches on Lake Michigan or in the city’s wonderful collection of museums (The Shedd Aquarium, The Field Museum, The Adler Planetarium etc.) My family’s vacations were to places like Wisconsin or Northwestern Illinois or Missouri rather than New York or California or Europe. Outside of family in West Virginia the only non-Midwestern spot we would ever visit regularly was Florida, which, during winter, seems like it is only populated with Midwestern expats. I go to school at The University of Iowa, in the eastern half of what is probably the prototypical Midwestern state in the minds of non-Midwesterners.

I’m still in the introspective process of figuring out what “things” have influenced my writing so my thoughts on this are a little incomplete, but the Midwest has certainly made me obsessive with sniffing out and excising any signs of pretentiousness in my writing. The Midwest often gets unfairly maligned as a bastion of anti-intellectualism, and while certainly an anti-intellectual current exists, I think that it’s actually a small part of a wider aversion to snobbery. I’m not sure of the origins of this aversion. Perhaps it comes from the predominance of Catholicism, with its obsession on the sinfulness and shame of the individual and Lutheranism, a faith founded in revulsion at ostentatiousness and corruption. Possibly it’s a reaction to the Coastal navel-gazing of a lot of American art. Or maybe it’s just the forced politeness endemic to the region. Whatever the case, it’s made me very conscious of not trying to “put on airs” if you will.

What do you think is the most compelling aspect of the Midwest?
In Australia there is a term called “Cultural Cringe” which refers to a kind of societal-wide inferiority complex. In the Australian case, it manifests itself in a constant need to compare (usually unfavorably) Australian culture to that of its former colonial master, Britain, along with a preoccupation with how the outside world views Australia (again, usually focused on negative perceptions).

While on the surface this may appear to be an expression of arrogance or overzealousness, the framing of these pronouncements as counterintuitive (“Contrary to what you might believe,” “Unlike what most people think,” etc.) as well as the clear dominance of The Coasts in American cultural depictions, reveals it to be the outgrowth of a deep insecurity about the worth of Chicago, and the Midwest as a whole, in a country that already has such distinctive regions as The Northeast or the West Coast or The South.

Midwesterners don’t really like to admit this; it’s somewhat embarrassing to be preoccupied with outsiders’ opinion of you in a culture that glorifies individuals who “don’t care what anyone thinks about them” (as if that person exists). But I find it to be absolutely fascinating, an exceedingly human quality and one I’d like to explore more in the future.

How do your experiences or memories of specific places—such as where you grew up, or a place you’ve visited that you can’t get out of your head—play a role in your writing?
Chicago is the overriding feature of both my writing and personage as a whole. I’m completely obsessed with everything about it, the food, the people, the buildings, the sports, the weather, the neuroses, the history, the politics, even the accent (which, despite my strenuous denials, I apparently possess). As much as I wish I were free of provincialism, Chicago is the aperture through which I view the world, so whenever I’m essaying, a form very much involved with how the author views the subject, it colors it, both consciously and unconsciously. I’ll probably be writing about it until I die.

Discuss your writing process—inspirations, ideal environments, how you deal with writer’s block.
I don’t really have a set process or environment for writing though I can say that it’s impossible for me to write in public places outside of the library. I usually write in unplanned spurts and fits and then revise in a similar fashion.

I dispense with writer’s block mainly by consuming copious amounts of comfortable media. I’ll binge-watch some of my favorite shows like It’s Always Sunny in Philadelphia or The X-Files as well as dry historical documentaries and non-fiction histories and something either in them or the process of interacting with them will offer me an escape hatch of any sort of dilemma I’m in.

How can you tell when a piece of writing is finished?
I’m usually deeply unsatisfied with my own writing so I never have that “I’m done and this is great” moment. Usually what happens is that, in the revision progress, I view my writing as a failure in one sense or another, but I keep writing under the auspices that the essay or story I’m working on is an “improving failure” and once I get the sense that the failure is as redeemed as it is going to get, I stop.

Who is your favorite author (fiction writer or poet), and what draws you to their work?
I’m a huge fan of historical non-fiction, both because of my own fascination with history but also because I’m drawn to many of the priors necessary to write such works. There needs to be a rejection of grand narratives, an embrace of loose ends, and above all an uncompromising pursuit of clarity and truth if you’re going to write great histories and the best historian-writers, such as Tony Judt and Antony Beevor, are the ones that embody and embrace those qualities.

As such, the writers that I tend to try and emulate the most are ones that infuse that historical frame of mind in more creative forms of writing. Ta-Nehisi Coates, James Baldwin, George Orwell, Mark Twain, and Toni Morrison are probably the biggest influences on me in that regard. It’s a bit reductive to say but probably the more pessimistic, the more unsure a writer, the more I admire their work.

What’s next for you?
Finishing up my last year at Iowa and then trying to get an MFA after that.

Where can we find more information about you?
You can follow some of my semi-filtered musings on Twitter at @Byrdie36. I write features for an alt-weekly in Iowa City called Little Village and my archive can be found right here. I sometimes write about film at a site I helped found with my friends Selena Frandsen and Vincent Mollica called https://moviesahomeawayfromhome.wordpress.com.