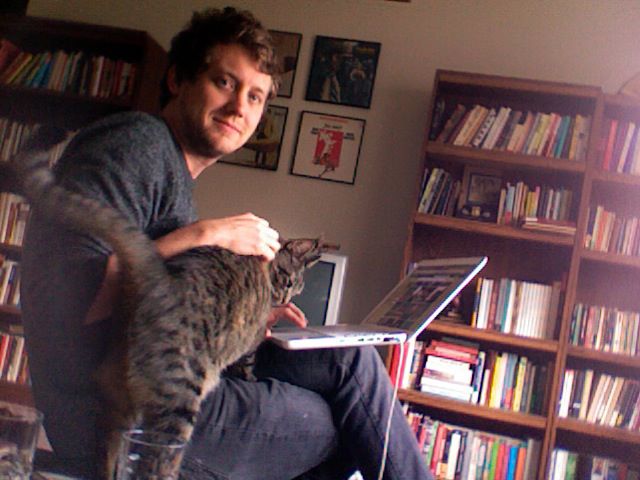 What’s your connection to the Midwest, and how has the region influenced your writing?
I’ve spent most of my life in southwest Ohio and currently live in Upper Peninsula Michigan, which is technically the Midwest even though it feels like the other side of the planet sometimes. I like to pretend that I’m not influenced by the region since most of my stories take place in a geographically vague American city where place isn’t important, but whenever I imagine that vague city I can tell it is Midwestern by the rusting urban centers, the corn field outskirts, and the large, friendly people who live there.

What do you think is the most compelling aspect of the Midwest?
Niceness. We’re wired to put others before ourselves, which makes our stories both beautiful and tragic. Gatsby might be the Great American Novel but I’m more moved by men and women who sacrifice their own dreams and ambitions for the happiness of those around them.

How do your experiences or memories of specific places—such as where you grew up, or a place you’ve visited that you can’t get out of your head—play a role in your writing?
When I was young my siblings and I would explore the sewers underneath our neighborhood, an old hilltop suburb just inside the Cincinnati city limits. I remember bringing dim flashlights and a healthy supply of Doritos so we could stay down there all afternoon. We’d scare away raccoons, carve our names into the concrete, and map where we might be in this world underneath the world we knew. At the time it was the most exciting adventure we could have in our otherwise dull area. Now I can only marvel that we didn’t die from sewer diseases. I guess writing is a bit like that: exploring sludge tunnels buried just below the surface.

Discuss your writing process — inspirations, ideal environments, how you deal with writer’s block.
There’s no foolproof process for producing strong writing. Not for me anyway. I have a few preferences—coffee shops, late mornings, clear goals—but no routine is successful for long. Any time I find a strategy that works the Writing Beast (which is probably some subconscious mechanism of self-destruction) it doesn’t take long to dismantle my plan and leave me lazy and word-less again. It’s a never-ending battle where the only recipe for long-term success is a combination of flexibility and dedication, forever attempting to tactically outmaneuver the part of me that knows quitting would be so, so easy.

How can you tell when a piece of writing is finished?
Is it ever? I’ve revised “Abandon” [the story in Midwestern Gothic] several times since it appeared. The piece is included in a novella I’m working on called After the Internet, so I’ll keep tinkering with it for the foreseeable future. I don’t know if there is a hard and fast answer to this question but I identify with this Calvino quote: “If I prefer writing [to speaking], it is because I can revise each sentence until I reach the point where—if not exactly satisfied with my words—I am able at least to eliminate those reasons for dissatisfaction that I can put a finger on.”

Who is your favorite author (fiction writer or poet), and what draws you to their work?
Like everyone, I have too many favorites. Aimee Bender, Amelia Gray, Amy Hempel, Ander Monson, Alissa Nutting, Amber Sparks, Anne Valente. That’s just people whose names begin with A. For the purposes of this answer I’ll pick the underappreciated Chris Bachelder because I can’t understand why more people don’t know and love his work. He experiments with form, mixes realism and the absurd, deploys humor to deepen sadness, and every book of his is remarkable. My favorite is the quiet but moving Abbott Awaits, which I reread regularly and thrust into the hands of everyone I know. Until you’ve learned about “hogging the mood” or the “hubcap index” you’re not fully seeing the world. Write me an email and I’ll buy your copy for you. It’s that good.

What’s next for you?
Finishing the After the Internet novella. Working on a novel about predictive analytics and free will. Editing Passages North and Threadcount, and online journal of miniature hybrid work. Most important, next year I’ll be getting married to an extremely talented writer who I happen to be in love with.

Where can we find more information about you?
On the Internet, however much longer that lasts.